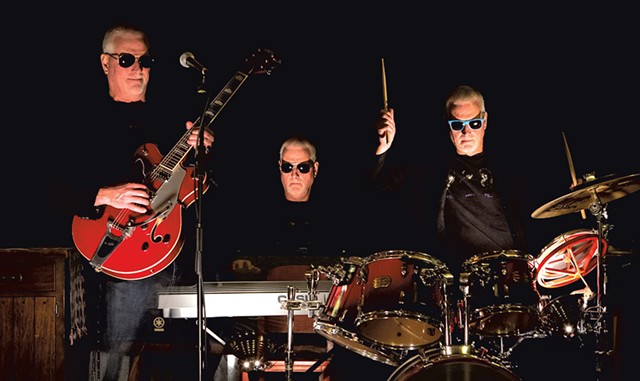 Real estate agent Dave Kleh gives his clients a gift whenever he closes a sale: a CD of his original music. Most Chittenden County homebuyers probably wouldn’t suspect that the Keller Williams Realty representative is a prolific singer-songwriter and self-producer, but he is. In fact, he’s become one of the most reliable voices in local music, having released an album of original material every year since 2014. He continues his streak with his most audaciously titled record to date: Love Is Greater Than Infinity Divided by Zero.

“I was really happy with the fluidity of the album, but it was a hell of a lot of work,” Kleh says with a weary smile. His white hair hints at his age, as do prevalent nods heard throughout his music to quirky ’70s and ’80s icons including Talking Heads, Devo and Frank Zappa. However, his youthful aura makes his years, 62, difficult to pinpoint.

Kleh has been a songwriter nearly all of his adult life. In the decade or so before he released his solo debut Me & My Friends, in 2014, he performed in an oddball rock group called the Fizz, formerly known as Flood in the Fizzy Factory. But his songwriting career stretches back much further. Some of the material heard across his solo albums was written more than 40 years ago. Only in the last five years or so has he made a concerted effort to get his music out in the world, for no real reason other than he’s finally mustered the time and energy to do it right.

“When I quit the [Fizz] in 2014, my income doubled,” jokes Kleh, referring to whatever paltry sums his former band collected from gigs. Of course, he’s never made any real money from playing music, but that’s not why he does it.

Kleh celebrates the release of Love Is Greater… on Saturday, October 19, at SideBar in Burlington. And though the album overflows with myriad synth tones, crunchy organs, harmonica and psychedelic guitar, he’ll play the album release show largely the same way he makes music: completely solo — though he’ll do so with prerecorded backing tracks to give the performance a richer, fuller sound.

“When I show up at practice, everyone’s there,” he quips about his one-man band.

Seven Days has struggled to define Kleh over the years. Regardless of any raised eyebrows or gentle ribbing about some of Kleh’s most out-there musical moments, all of the music scribes who’ve covered his work have come to the same conclusion: There’s much more to this guy than meets the eye. Behind the “cool dude” dark shades he sports on nearly all of his album covers lies the relentless mind of a talented artist bursting with ideas.

Kleh’s current trade is real estate, but he spent much of his life as an entrepreneur. In the ’80s, he owned Finest Hour Hot Tubs in downtown Burlington, a respite for anyone looking to grab a quick soak. He wrote the company’s commercial jingle, which he’ll happily sing for you on command.

But Kleh’s biggest claim to fame in the local business community is that he founded the iconic Pizza Putt, a South Burlington-based indoor miniature golf course and pizza parlor, in 1991. Kleh sold the beloved rec center in 2005; it closed permanently this year.

Kleh got the itch to start making his own albums just after the Fizz’s dissolution. He slowly assembled a recording studio in the basement of his Colchester home, where he does all of his work.

Kleh’s discography grows by one every year. He followed up Me & My Friends with It Becomes a Hassle to Be a Genius When You’ve Run Out of Limes in 2015. In 2016 he released Laugh: A Collection of Drinking Songs from the 802, followed by It’ll Be Alright and Suite of Dreams in 2017 and 2018, respectively. The albums, including Love Is Greater…, vary thematically, but Kleh’s softly sung or spoken vocals, inventive composition and execution, and his knack for crafting compelling chord progressions tie them all together.

For instance, Love Is Greater… opens with a psychedelic “Ode to Mars,” which pairs ribbons of wah-wah guitars and a rock-organ foundation, resulting in a ’70s throwback feel. He double-tracks his vocals: one with no effects, the other pitch-bent into a shrill, alien caricature. It’s groovy, surreal and unapologetically weird.

Love Is Greater… departs from the politically inclined music heard on some of his earlier work — though Kleh is actually about as apolitical as they come. He claims to have not participated in a presidential election since casting a vote for the late Ross Perot in 1992.

“I’m not too much into writing political stuff anymore, because it’s just rants,” he says.

The new album eschews songs like the globally paranoid “China” from It’ll Be Alright, or the dancehall-lite jab at the military of Me & My Friends’ “Song for the Troops.” Instead, he favors love songs, as the title suggests. It’s sort of the flip side of his feelings about government.

“I’m aloof to politics because of the negativity,” he says, casting aspersions on civil servants who become millionaires, and vice versa.

Kleh wanted his new album to be all about love — especially his love for his parents, both of whom died in the last few years.

“Once your final parent dies, you can’t go to that higher authority anymore,” says Kleh of the disorienting process of losing his folks.

“I can’t go home,” Kleh wails on the album’s title track, a meandering odyssey that recalls Fastball’s organ-forward “The Way.”

But his interpretation of the concept of love takes many forms. He’s much more literal on the sweetly humble “I Could Fall in Love With You” and the jaunty “Some Lovers.” He borders on overly sentimental territory but tempers his mushier inclinations with a dash of weird.

Kleh wraps up his latest with the abstract epic “The Last Four Minutes of the Nuclear Age.” Layers of static and noise obscure sections of the largely piano-driven tune, which twists and turns through several movements. It’s Kleh at his most “high art,” disregarding the pop conventions that guide much of his work.

Several things are true of Kleh’s work across his discography: He’s fearlessly novel, doesn’t hesitate to be silly, and regularly looks to the dreamier side of consciousness for inspiration. Looking forward, Kleh is already tinkering with some new songs for his next album, likely due out in 2020. But Love Is Greater Than Infinity Divided by Zero seems to be his masterpiece, a confluence of all of his creative powers.

“Love is the greatest thing that there is,” he says.