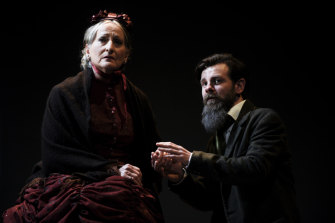 Sondheim specialists Watch This have mounted much of his ouevre, most recently a production of A Little Night Music with Nadine Garner as Desiree. Yet even this company struggles to make Sunday In The Park With George appealing to an audience outside one-eyed Sondheim devotees, and perhaps those curious to experience the work live for the first time.

The award-winning, high-concept musical takes a famous painting by Georges Seurat, A Sunday Afternoon on the Island of La Grande Jatte, as its muse. Seurat was a post-impressionist who fused science and art by obsessively pioneering pointillism and chromoluminarism: techniques where separate colours fuse into one in the eye of the beholder, making the viewer an essential part of the art.

If that sounds specialised, the musical unpacks Seurat’s brief biography and long legacy into broader themes in aesthetic thought, including the nature of artistic creation, the relationship between art and life and, in the second half, the challenge faced by contemporary artists in a world where commerce and creativity are often inextricable.