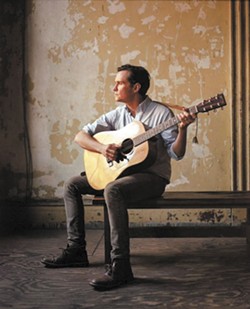 LOCAL singer/songwriter Aaron Paul Zimmer is best known for his work with City Hotel, but he also made waves last year for his solo album Saints And Heretics. This year, he’s got a new focus—being a father. This writer knows a thing or two about being a new parent as well, which made for a unique conversation with Zimmer about shifting perspectives when it comes to music, and what the journey has been like so far.

Zimmer, who plays the Roasting Room in Bluffton on Oct. 25, spoke about all of that as well as what fans can expect at his upcoming gig.

The show at Roasting Room seems like it’s going to be really cool. They’re doing great stuff over there. Locals seem to just show up as well, no matter who’s playing. That’s pretty wonderful.

Yeah! The sound is incredible and the venue is incredible. And we’ve experienced that same thing. I think people know they put on a good show. I’m hoping the same happens with our shows and we pull in a Bluffton crowd.

What’s in the setlist for this show? Is it a mix of solo and City Hotel?

It’s going to be a lot of songs from the solo record, and there are a few new ones that we have. I’m going to actually do more solo than we’d normally do—just me and my voice and guitar. We’ve got Jalen Reyes opening the show; he’s the drummer for Rev Bro Diddley and the Hips. We’re super psyched, fore. We’re trying to get as many rehearsals in with everyone’s busy schedules, which I’m sure you’re familiar with now [laughs].

Oh, yeah! Things like that get a little more complicated when you become a parent [laughs]. Has your perspective on music shifted at all since this journey started for you? Aside from priorities shifting, I’ve noticed that it really makes me motivated to pursue music in maybe a more focused way.

I think everything in my life has just become that much more deliberate, because there is the time crunch. It makes everything more deliberate—you focus on what’s worth focusing on and you let the other stuff go. That’s happened with who I want to play music with, and the venues I choose to play at. So it’s kind of changed the kind of people I play music in front of, but overall it has made me more motivated and focused on what’s really important.

How has impacted songwriting for you? I’ve found that I have smaller pockets of time to devote to it, which seems to have influenced the process positively so far. And, of course, your perspective changes in terms of what you write about.

I’ve definitely had to re-learn how to do everything; re-learn how to cook while holding my son, how to walk the dog, how to answer the phone. So I’ve also learned how to rehearse and write with him, say, while my wife is doing something. And the good thing is that he likes music and it pacifies him. He’s interested in the guitar, and he’s not a very harsh critic either [laughs].

I’ve started playing mandolin for my daughter after bath time, and she seems to really love it. It’s so interesting what babies gravitate towards in that way—you can tell when they like something and want you to keep doing it!

Yeah! My son likes songs that are very rhythmic.

Do you feel like your son’s appreciation for music in that way makes you appreciate it in a new light as well?