Actor Kriti Sanon’s sister Nupur Sanon bagged her first project, opposite Akshay Kumar, in a music video of the song Filhall by Jaani B Praak, which released on November 9, 2019. The singer had previously lent his voice to the song Teri Mitti in Akshay’s patriotic film Kesari.

In less than 24 hours, the video received over 10 million likes and Akshay’s fans went gaga over the onscreen chemistry between the duo, while Bollywood also lauded them for their performance. However, it is pertinent to mention here that the renowned actor is 52-years-old with young Nupur, being only 23.

Nevertheless, regardless of spending two decades on screen, this was Akshay’s first music video ever, following which he also tweeted about it on his social media handle.

The narrative revolves around Akshay and Nupur, who are forcefully separated as youngsters by the girl’s family. They reunite years later, after the girl gets into an accident and ends up at the hospital he works in.

According to India Today, the five-minute song is a romantic ballad depicting the pain of separation, however, showcases how the grown man does not get over his first love even after getting married, but manages to refrain from cheating on his current wife, even after encountering the loss of his life.

Nupur’s elder sister, Kriti Sanon, who worked with Akshay in Housefull 4, said that she cannot get enough of the song. Tweeting, “Its finally out! I’ve been obsessed with this heart wrenching song for a while now. Its been on repeat mode and once you guys hear it, you’ll know what I mean. It is soulful.#Filhall”

The music video also features Punjabi singer Ammy Virk. While several pictures of Akshay with Nupur and Ammy did rounds on social media prior to the song’s release, where the newcomer can be seen dressed in a simple white and blue kurta, paired with a churidaar and her hair tied in a plait. 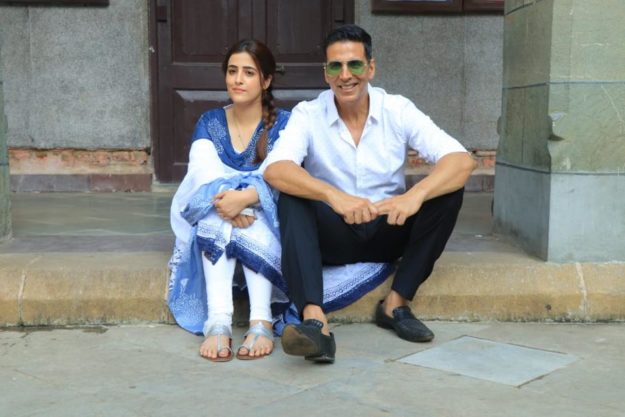 Nupur has earlier shared the screen space with Kriti in a hair oil commercial. The siblings are often spotted together at events and parties and post pictures of each other on social media.