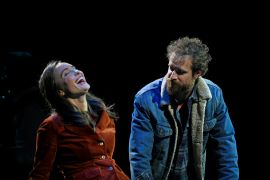 3-D Theatricals launches its 2019-2020 season with ONCE, The Musical, winner of eight 2012 Tony Awards including Best Musical. The production, directed by Kari Hayter and choreographed by Linda Love Simmons with musical direction and conducting by David Lamoureux, will play October 11-27 at the Cerritos Center for the Performing Arts (18000 Park Plaza Drive, Cerritos, CA). Opening night was, Saturday, October 12.

ONCE, The Musical, adapted from the Academy Award-winning motion picture written and directed by John Carney, is about a heartbroken Irish guitarist who has given up on love and music until an immigrant girl inspires him to keep going. Their shared love of music draws the two together and the unexpected friendship quickly evolves into a powerful but complicated love story.

ONCE, The Musical features a book by Enda Walsh, and music and lyrics by Glen Hansard and Markéta Irglová. The production also features songs by Fergus O’Farrell, Martin Lowe, Andy Taylor and Enda Walsh. Music is orchestrated by Martin Lowe.

The production stars a company of actor/musicians who will play their own instruments. Also, The Cerritos Center for the Performing Arts, which features an elaborate pneumatic system making it one of the most technically advanced theatres in the world, will be transformed to an in-the-round configuration, creating an intimate setting unique for this production.

ONCE, The Musical originally opened in 2012 at the Bernard B. Jacobs Theatre in New York City, where it ran for 1,168 performances. It was nominated for 11 Tony Awards, and won eight, including Best Musical and Best Book of a Musical. The original cast featured Steve Kazee and Cristin Milioti. ONCE, The Musical was originally produced on Broadway by Barbara Broccoli, John N. Hart Jr., Patrick Milling Smith, Frederick Zollo, Brian Carmody, Michael G. Wilson, Orin Wolf and The Shubert Organization (Philip J. Smith: Chairman; Robert E. Wankel: President); Produced in association with New York Theatre Workshop; Associate Producer: Charles Stone. The original production was directed by John Tiffany, with movement by Steven Hoggett.

Now in its 11th season, 3-D Theatricals has established itself with audiences and fans, far and wide, as one of Southern California’s premier professional theater companies. The resident company of the state-of-the-art Cerritos Center for the Performing Arts,

3-D Theatricals has earned a reputation for fresh interpretations of Broadway shows featuring the highest caliber Broadway talent. The company seeks to provide Southern California with professional theater that includes Broadway Musicals, plays, readings, and new works. It is 3-D Theatricals’ goal to increase arts awareness throughout the community and to nurture our youth with culture and education. The company is committed to excellence and bringing new life and demand to the arts.

On sale now for $25.00 – $90.00.  Online Ticketing: www.Cerritoscenter.com  or www.3dtheatricals.org. Group and Student discounts are available.  Note: $20 Box seats are also offered on a presale basis.  A processing fee per ticket will be added to all orders that are not presented as part of the CCPA’s season and will be reflected, if charged, before checkout. All ticket sales are final and non-refundable.

Complimentary parking adjacent to the theater.