Amazon (AMZN) has been ramping up its efforts to increase market share within the music streaming industry. While most of the analysts are focusing on the rivalry between Spotify (SPOT) and Apple (AAPL), we can see Amazon close the gap with these two competitors. Financial Times has mentioned that Amazon had 32 million subscribers on its music platform which includes Prime Music and Unlimited.

The report estimates that Amazon’s music subscriber growth is close to 70% while Spotify’s growth is only 25% and Apple Music’s growth is 40%. Amazon also has the advantage of monetizing Prime music subscribers through their e-commerce purchases. Both Spotify and Apple Music do not have this luxury which puts them at a big disadvantage over the long term. If Amazon is able to gain a significant market share in the music industry, it will provide a halo effect for other services provided by the company.

Amazon’s growth in the music streaming industry has gone mostly unnoticed. One of the reasons could be the hype surrounding Apple Music. Apple recently completed four years for its music streaming services. During this time, it has added 60 million subscribers to its music platform. This has increased the competition between Apple and Spotify. Recently, Spotify has also filed an antitrust complaint Apple. This has increased the focus on these two companies.

However, Amazon is in a perfect spot to take advantage of the industry composition to gain subscribers at a rapid pace. It allows substantial discounts to members who are Prime subscribers and even greater discounts for subscribers who use the music services on only Echo devices. Amazon, Apple, and Spotify have a $10 per month subscription for their music services. Prime members get additional discount and can avail Amazon Unlimited Music for $8 per month. Customers who listen to music only on Echo devices can avail this service for only $4 per month.

This pricing option allows Amazon to increase the attraction of its Prime membership and also increase the sales of Echo devices. Increase in Amazon music customers has helped increase the subscription revenues.

Besides the direct payment for a music subscription, customers who use Amazon music through Prime membership would be more loyal towards Prime. This gives Amazon greater flexibility to increase Prime fees in the future. 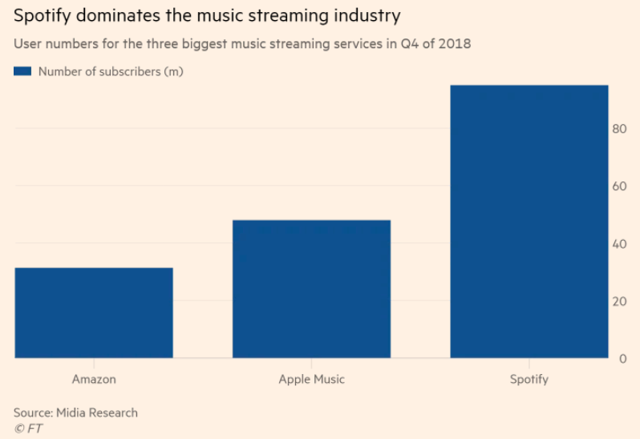 Amazon’s music service is estimated to have a growth rate of 70% while Spotify is at 25% and Apple is at 40%. If this growth trend continues, we should see Amazon close the gap with Apple and possibly overtake it by the end of 2020. Pricing is very important in the music streaming business as there are few distinguishing factors in the service provided by different players. Amazon could use its Prime membership base to gain more customers by providing them cheaper music streaming prices.

The biggest advantage for Amazon will be its own e-commerce and advertising platform. Amazon should be able to monetize customers of music subscription through its retail platform and other services. Both Spotify and Apple do not have this option. This should allow Amazon to run its music services at a substantial loss for longer period allowing it to increase its market share rapidly.

A large part of the future valuation trend of Amazon will depend on how much it can increase the subscription business and on how loyal these subscribers are. Last year, Amazon increased its Prime membership fees. Prime member base in the US is already close to saturation which means that future increase in Prime revenues will be from new services added to Prime. The music service increases the loyalty of customers within Amazon’s ecosystem and should attract them to try other services. 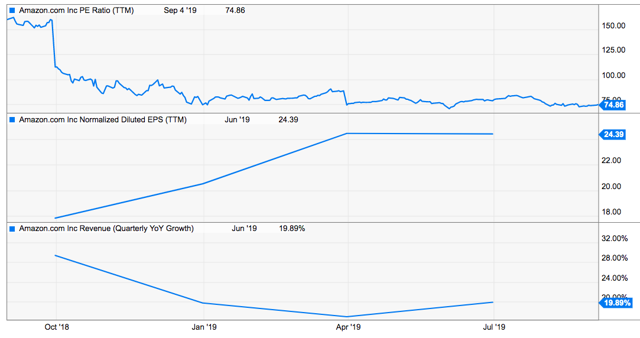 Amazon is trading at a P/E ratio of 75 which is quite pricey but it is also showing rapid improvement in EPS. This should allow a further decrease in P/E ratio in the next few quarters. If Amazon is able to take the second spot from Apple Music in terms of subscriber count, it would be a big boost to the bullish sentiment of Amazon stock. The Echo devices along with growth in Amazon Music and Amazon Video allow the company to tightly control the delivery mechanism which should improve the pricing leverage for the entire ecosystem.

Amazon is also increasing investment in its video streaming business. In the latest quarterly report, Amazon mentioned that it spent $3.5 billion on video and music expenses in the first two quarters of this calendar year. It wouldn’t be a big surprise if the company provides a combo offer for different streaming services in the future. Spotify-Hulu combo is already quite popular and several analysts have suggested that Apple might also go for a combo streaming subscription offer as soon as its video streaming service gains decent customers.

I strongly believe that Amazon is in a perfect spot to gain market leadership in music services in the next few quarters. This should help other services and improve the long term value proposition of Prime membership.

Amazon is showing faster growth in music streaming compared to market leaders Spotify and Apple. At the current pace, Amazon should be able to reach 50 million music subscribers by the end of this year. This also helps the Prime membership because of additional discounts available for Prime members. The market leadership position of Amazon in smart speaker segment should be a key factor in future growth and consolidation.

Disclosure: I am/we are long SAVE, AMZN. I wrote this article myself, and it expresses my own opinions. I am not receiving compensation for it (other than from Seeking Alpha). I have no business relationship with any company whose stock is mentioned in this article.