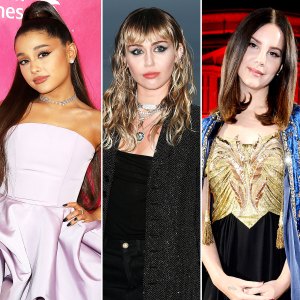 “Don’t Call Me Angel” was directed by Hannah Lux Davis. The Washington native is the mastermind behind some of today’s artists’ most memorable videos, including Demi Lovato’s “Sorry Not Sorry” and Kacey Musgraves’ “High Horse.” She’s also worked with Grande before on the visuals for songs such as “7 Rings” and “Break Up With Your Girlfriend, I’m Bored.”

Grande, Cyrus and Del Rey’s music video debuted days after a seven-second teaser clip for “Don’t Call Me Angel” was unveiled on Tuesday, September 10. The trio were shown strutting together as they donned all-black looks and massive angel wings.

“Don’t Call Me Angel” is the latest glimpse at what’s to come with the upcoming Elizabeth Banks–directed version of Charlie’s Angels. The reboot follows a trio of detectives, the Angels, as they join forces to protect the world under the guidance of the mysterious Charlie.

“It’s kind of like a ‘woke’ version,” Stewart, 29, told Variety in September 2018. “There’s a kitsch nature to the last ones that was super fun. But nowadays, if you see a woman in combat, everything should be completely and utterly within their ability.”


Actors Who Portrayed Real People in Movies and TV Shows

During a press call in July, Banks, 45, said audiences will see a new side of Stewart in the upcoming remake.

“She is a legit action heroine. There’s no doubt about it. She’s super badass in the movie,” Banks said of the Twilight star, per Cinemablend. “She did so many of her own stunts. Did all of her training. They all did.”

The Pitch Perfect star continued, “[Stewart’s] really, really funny. I think she lands as many jokes in this film as any comic actor working today. I think that will really surprise people.”