From the barn with the light bulbs and bandanna flags strung overhead emerged the live sounds of “Heart of Gold” by Neil Young from the quaint Kickin Country Stage at the Los Angeles County Fair in Pomona.

Jabe Amato, a handsome, tattooed and blue-eyed musician, stood onstage strumming his guitar on a warm Thursday afternoon, singing the first of many songs he’d play that night at the fair. His audience was modest and eclectic: A man with a long white beard tapped his fingers on his wheelchair; a trio of brown-skinned teenagers flopped in the middle; and to their right danced two toddlers on a block of hay while their mothers flipped through a song list.

For the last three years, Amato, 42, has played music to fair-goers in several small stages throughout the Fairplex. The crowds, said the Fountain Valley resident, are “very chill and very easygoing.” And diverse.

“There’s such a wide range of tastes in music,” Amato said. “I’ll have people request Snoop Dog and then the next minute requesting the Beatles.” It’s why three times a week for four hours, he lets audience members determine his set list. He wants to keep them engaged.

His approach aligns with the L.A. County Fair Assn.’s aim to offer something to everyone at the fair, which ends Sunday. Besides a slew of deep-fried food options (including watermelon), rides for all levels of thrill-seekers, an esports world, dance performances and more, musical variety is critical in appealing to its diverse clientele, which numbered 1.13 million last year. From local musicians and up-and-coming artists to Grammy-winning stars like Latin rapper Pitbull, the options are many.

Sprinkled across the fairground’s 543 acres are 10 stages of varying sizes. The smallest holds about 50 people and is frequented mostly by families with children and passersby. Those who seek a larger, more spectacular concert experience can buy tickets to see performers on the Grandstand stage, which can hold up to 9,000 people. Ticket prices vary by artists, but they typically start at $44 and can surpass $150. That’s still a bargain compared with ticket prices at other venues such as Staples Center and the Forum. 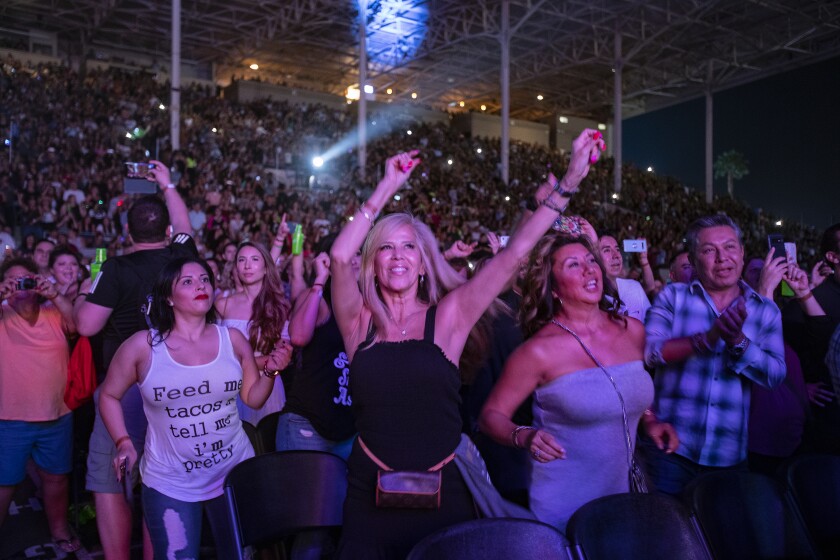 Fans dance as Pitbull performs at the L.A. County Fair in Pomona.

“We try to keep everyone in mind,” said Miguel Santana, the association’s president and chief executive, referring to their selection of the year’s musical acts. “We wanted to be diverse and representative of Southern California.”

It’s why in 2017, shortly after Santana was appointed CEO, he made it a goal to boost revenue and increase attendance by attracting older teenagers and millennials. In Southern California, that meant targeting young Latinos. If he couldn’t, he realized, the fair would be doomed. Part of that effort involved partnerships with local venues and not raising entrance prices.

Finding musical acts that appeal to different age groups, cultures and musical tastes is difficult, admits Dale Coleman, who books the artists. Trying to please the R&B and Latin-jams lovers, the oldies and country aficionados, the hip-hop and rock enthusiasts, is no easy feat, said the chief revenue officer and vice president of sales.

But Coleman seems to have figured it out. A 30-year fair employee, he oversees the End of Summer Concert Series, which brings a mix of eclectic music and stand-up comedy Friday to Sunday evenings to sometimes thousands of people at the Grandstand stage. 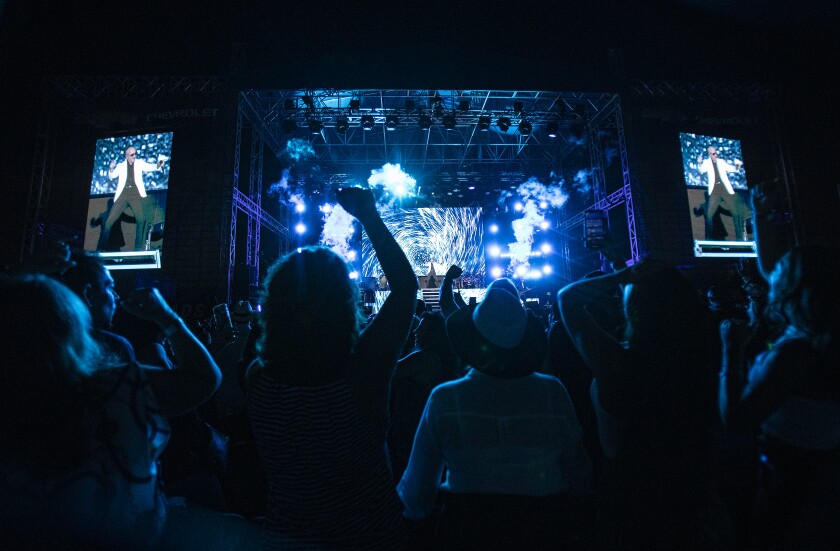 The blend is a big change for the series, which began more than 20 years ago and mostly featured oldies acts, said Coleman. For a while, it struggled to stay alive.

In the more than 10 years that War has performed at the fair, the audience has always been “multicultural,” said Lonnie Jordan, the band’s vocalist and keyboardist. “I see, out in the audience, the parents who were loyal to us back in the early days, back in the early ’70s.” They’re much older now, he’s observed, when he sees them on the bleachers with their children and grandchildren enjoying classic hits like “Why Can’t We Be Friends,” “Spill the Wine” and “Cisco Kid.” 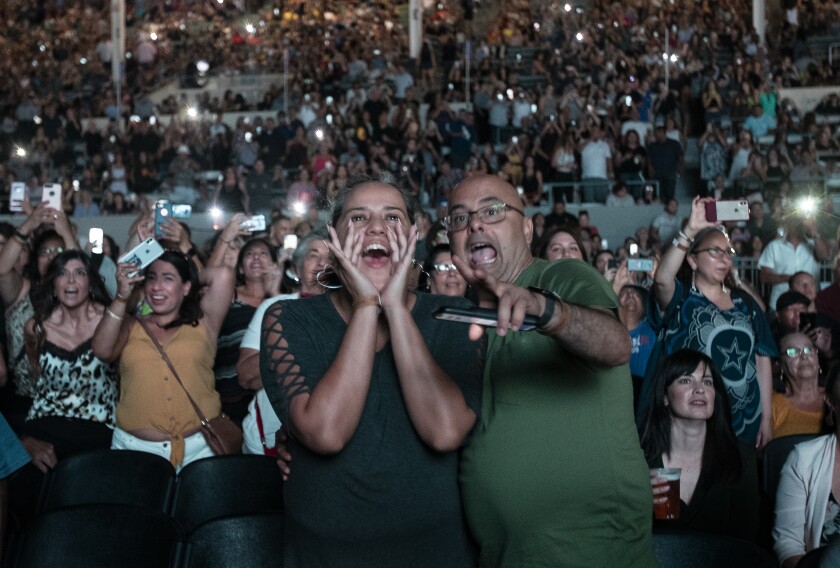 Fans react to a performance by Latin Grammy winner Pitbull at the L.A. County Fair earlier this month.

War and Chicago, who also performed this year, are the sort of old-school legacy bands that concert organizers still make space for every year. Their primary fans are typically older folks who grew up listening to them.

Part of Lucas Rivera’s job within the association is to know popular music. “The work I do is specific,” said the senior vice president of programming. “My job is keeping my finger on the pulse of what’s hot and trending” and being mindful of who is listening to what.

Sometimes, though, a musician’s fans are unpredictable.

Delphina Russell is one of them. The 82-year-old Covina resident sat in her wheelchair on a recent evening eagerly waiting for her favorite artist to emerge: Latin rapper and hip-hop artist Pitbull, who was scheduled to perform at the Grandstand stage. It was her first concert, and she was elated.

“I love his bald head. I love his tattoos. I love the way he jumps up and down. He’s a very good entertainer,” said Russell, who’s been a die-hard Pitbull fan since 2011 and has attended the fair since 1955. 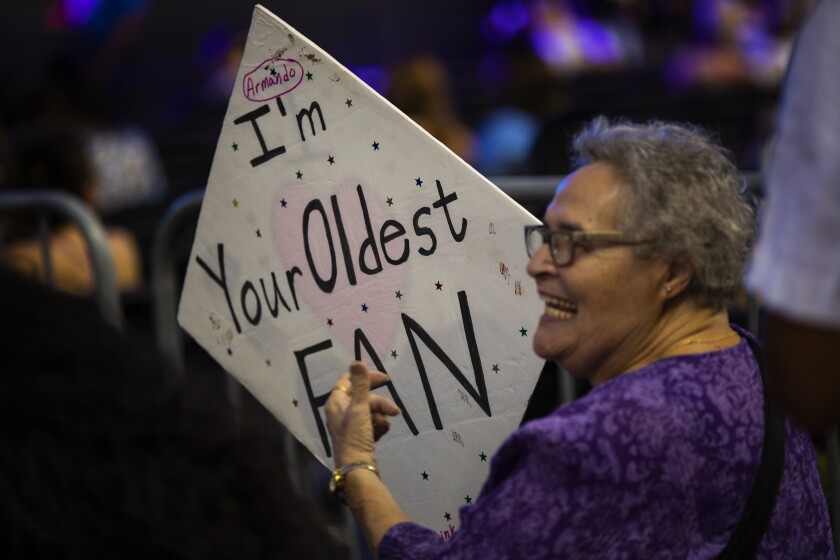 “Why did you come this year?” asked her grandson David.

“Pitbull,” said Russell without pause. She keeps three small photos of the Cuban American artist in her wallet next to pictures of her grandchildren.

When the stadium lights went off and Pitbull, all clad in black, came to the stage, the fans at the sold-out show clapped, cheered and whistled.

And Russell, smiling from ear to ear, rose from her wheelchair briefly, waving her left hand in the air. During the almost two-hour set, her grin never faded.