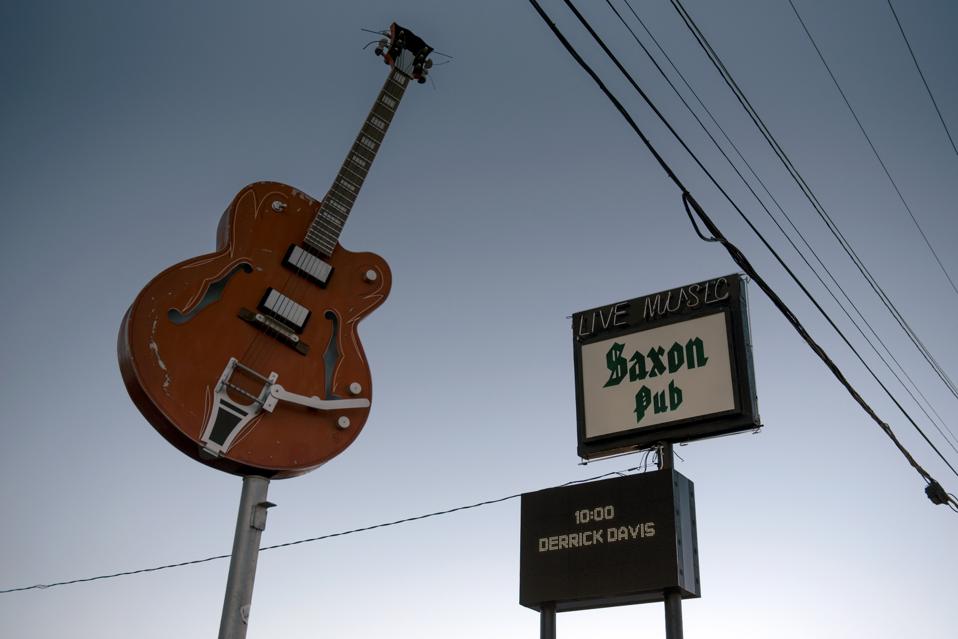 The Saxon Pub in Austin, Texas.

As the coronavirus pandemic continues to unfold, a casual reader thumbing through the weekly film and music listings in The Austin Chronicle might get the impression that the city’s renowned cultural life has somehow avoided the social restrictions and business closures affecting the rest of the nation. Miraculously maintaining its newstand print form since 1981, the weekly journal of local art, culture, and politics has lost a bit of heft in recent weeks, but its music listings suggest that the self-proclaimed “Live Music Capitol of the World” remains committed to its mission even if the music itself is no longer live in the strictest sense.

Browsing the paper’s daily “Live Music” calendar in the May 14-21 issue, it’s easy to overlook the section header’s new addition of “Streaming” in small text. While the listings are noticeably slighter than the norm, there were 16 local live streaming shows on Friday alone, and no doubt countless others the Chronicle was not aware of. Pretty good numbers by the standards of most cities, but this is Austin. Highlighted live streams in the issue included the music and comedy crossover event All Together ATX Festival; a local showcase for women in jazz (LuluFest); and renowned local avant-gardist Graham Reynolds showing viewers how to make software-aided music on their computers at home.

As many gin joints remain shuttered, live music institutions like punk/metal biker bar The Lost Well are getting heavy assists by musicians offering their live streams as fundraisers for the places they once played. The fate of many, if not most, of the city’s beloved live music spaces remains uncertain, with temporary closures compounded by the devastating cancellation of the South by Southwest Music Festival back in March.

The following month, the Austin Music Disaster Relief Fund was created by the City Council to provide grants for struggling local musicians. Many Austin artists have increasingly turned to hosting weekly live streaming happy hours in order to stay connected to their fans on Facebook, Instagram, and other platforms. The city’s live theaters, art galleries, and even museums have also upped their online game as virtual live events and other streaming content become the new norm for starving culture vultures of all stripes.

With only one movie theater in Austin currently open for public business (despite the freedom to do so with restrictions), the Chronicle’s film listings are as truncated as might be expected, with the same mid-May issue offering coverage of only three virtual releases in their “New Reviews” section. The “Special Screenings” section, however, is now under the subheading of “Virtual Screenings” and is devoted to the online efforts of Austin’s progressive arthouse cinema scene, with the AFS Cinema, Alamo Drafthouse, the Paramount Theatre, and Violet Crown Cinema all offering an array of stay-at-home streaming options.

In a press release on May 21, the Austin Film Society announced its new Lone Star Slate series, a diverse streaming program devoted to works by Texas filmmakers who have been supported by grants and resources from the AFS over the years. The Lone Star Slate is just one component of the Society’s larger Virtual Cinema platform while its own brick-and-mortar cinema remains indefinitely closed to the public. 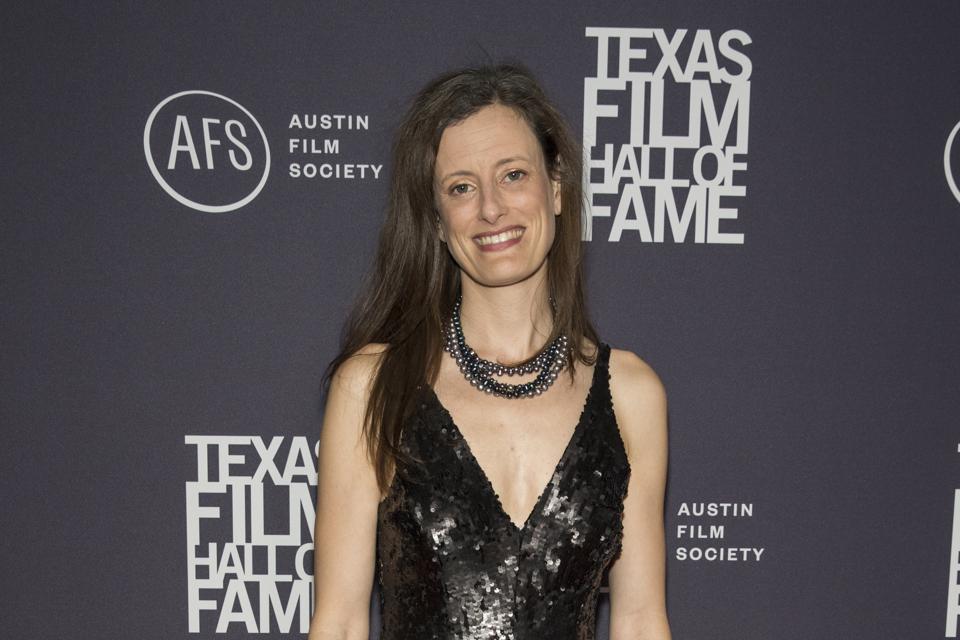 “The options available to us via streaming these days are overwhelming. Finding independent and regional stories can be like looking for a needle in the haystack on the corporate streaming services,” Holly Herrick, head of film and creative media at the Austin Film Society, explained. “AFS is positioned to champion Texas filmmakers, and connect them with audiences. In the past, the AFS Cinema was our primary strategy for this, but the current crisis pushed us to explore other avenues for engagement. Advances in VOD technology allow us to partner with our filmmakers, creating an opportunity for them and for our audiences.” Proceeds from the streaming platform will be split between the AFS and the featured filmmakers.

The city’s many annual film festivals are also finding new ways to stay connected to their faithful audiences. On May 17, the Austin Jewish Film Festival hosted a live webinar with film star Jessie Eisenberg and director (and University of Texas alum) Jonathan Jakubowicz discussing their work on Resistance, a new VOD release chronicling mime maestro Marcel Marceau’s time with the French Resistance during World War II. 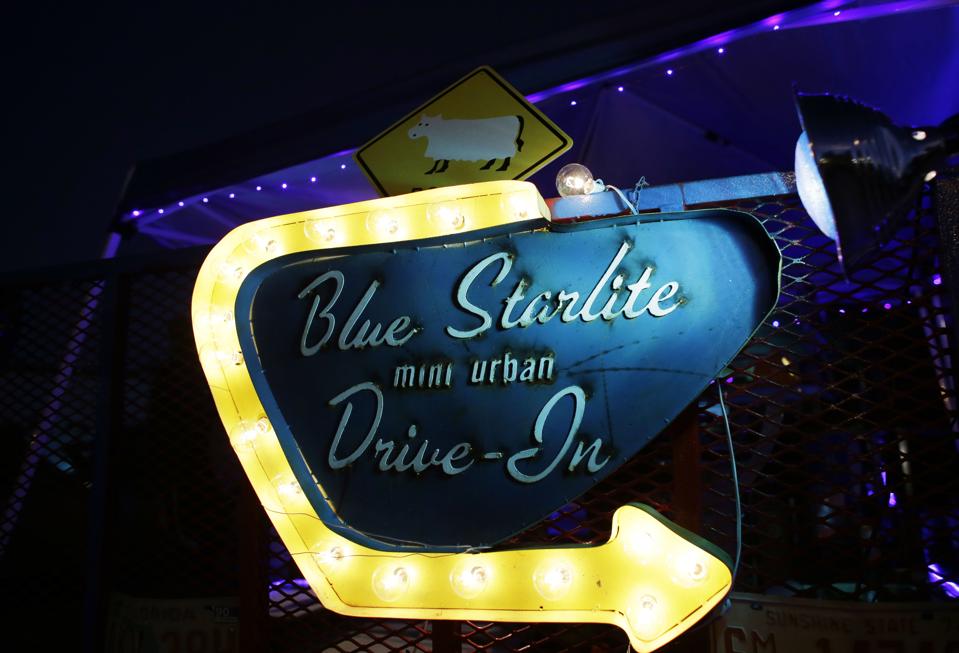 Austin’s trendy drive-in movie culture is in a unique position to thrive during the time of social distancing. The Blue Starlite Mini Urban Drive-in continues to operate in two area locations while implementing ESD (extreme social distancing) rules requiring customers to stay in their cars at all times. Doc’s Drive In takes a similar approach in repertory programming, with concessions preordered online then deposited on car roofs as patrons enjoy the film in a safe, semi-public setting. The Starlite’s East Austin location currently hosts as many as seven screenings a night, while Doc’s offers one or two features most nights of the week. 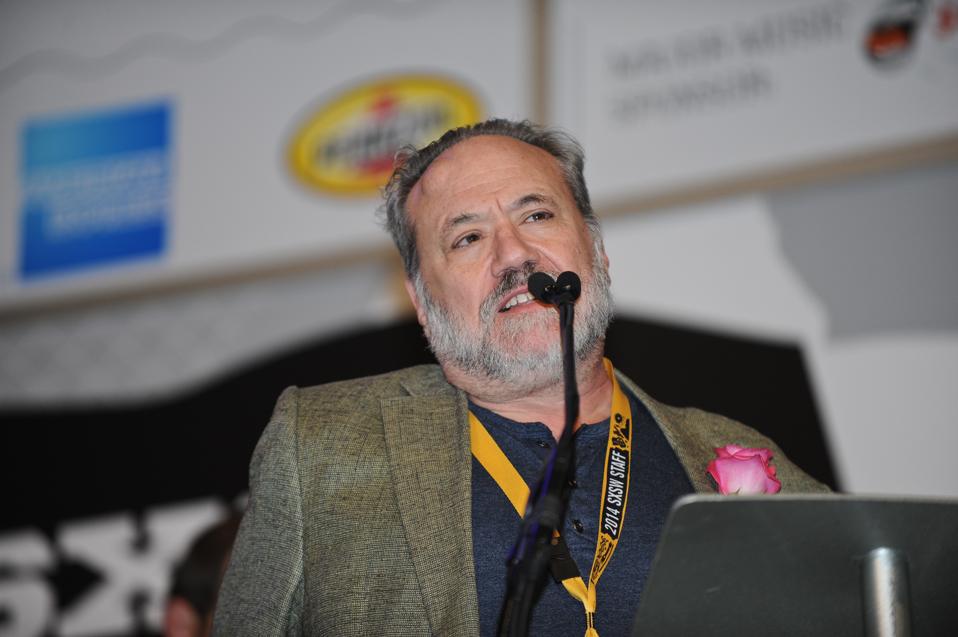 Louis Black co-founder of The Austin Chronicle and SXSW speaks at the Austin Music Awards during … [+] SXSW on March 12, 2014 in Austin, Texas – USA. (Photo by Manuel Nauta/NurPhoto/NurPhoto/Corbis via Getty Images)

The Chronicle itself is, as always, instrumental in making a lot of things happen and keeping Austin virtually weird these days. After all, Chronicle cofounder and longtime editor Louis Black, arguably Austin’s de facto cultural czar, also heads up the city’s legendary South by Southwest Film and Music Festival and is a cofounder and former president of the Austin Film Society.

Kevin Curtin, the paper’s music scene scribe and tireless promoter, performed alongside local Waits-ian pirate punk Gary Lindsey and an impressive roster of Austin musicians at a game-changing pop-up drive-in event in early May. Taking over a field in South Austin, organizer Ben Ballinger provided an FM radio signal for the sold-out 25-car event. Roughly 100 people enjoyed an evening of actual live music under the stars filtered through their FM radios while observing social distancing in their cars and truck beds.

Austin-flavored drive-in music events are likely here to stay, with moody folk artist Strand of Oaks following up on May 21, and funkadelic blues singer Shiny Ribs taking the field the following night.

Despite the ever-present darkness of the times, players in the city’s rich film and music scenes seem determined to ride out the storm in ever-inventive ways.