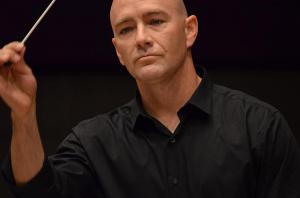 Recent Commander of the U.S. Army School of Music, Huff currently is associate director of the Boulder Chamber Orchestra, music director emeritus of the Astoria Symphony Orchestra (NYC), incoming Commander of the 44th Army Band (NM) and co-director of the International Conducting Institute, an organization dedicated to training the world’s next generation of conductors. Huff has conducted across the U.S. and Europe for more than 15 years. As a U.S. Army Music Officer, he has conducted concerts at the White House, U.S. Capitol, Arlington National Cemetery, Pentagon, and other important monuments and landmarks in Washington, D.C., for audiences numbering in the thousands. Abroad, he has conducted in France, Germany, Italy, Russia, Bulgaria, Czech Republic, and Jordan.

“I am honored and flattered to have been selected by this great organization,” said Huff. “I moved to Boulder in search of opportunities to make music, and having spent fifteen years standing in front of musicians, and the last six in front of Army bandsmen, I feel like this was inevitable. I love concert band music, and being named music director of the Boulder Concert Band feels right to me. The band and I are going to do a lot of great things together. I can’t wait to start!”

Maestro Huff’s past positions include music director of the Round Rock Symphony Orchestra (TX), director of the U.S. Army Orchestra (DC), conductor of Moscow Ballet’s U.S.A. east coast tours, and associate producer of opera at the Manhattan School of Music.

Maestro Huff holds degrees from Texas State University and UCLA, and also studied at the Trossingen Hochschule für Musik (Germany) and L’Institut Musical Provence-Aubagne (France). In 1999, he earned first prize in the Los Angeles Valley Composition Competition for his homage to Charles Ives, Begging the Question. In 2001, he was named Conductor of the Year by the California State University system, and he was a semi-finalist in the 2004 Maikop International Conducting Competition (Russia). In 2011, the Texas House of Representatives signed a resolution recognizing Maestro Huff’s distinguished musical service, and in 2015, the U.S. Army conferred upon him a Meritorious Service Medal for his outstanding and exceptionally meritorious leadership of the U.S. Army Orchestra in Washington, DC.

Huff recently began studying at the University of Colorado in Boulder in pursuit of a Doctor of Musical Arts degree in Orchestral Conducting. At CU, he is co-director of the Campus Orchestra.

“I marvel that the Boulder Concert Band now has the privilege of working with a conductor with such broad and distinguished experience,” commented Bernard Buster, president, Boulder Concert Band Board of Directors and principal French Horn. “Our first rehearsal clearly exemplified why his resume is so impressive. I am confident that our upcoming concert season will be spectacular under the direction Maestro Huff, and urge everyone to experience our concerts.”

Under the direction of Maestro Huff, now is the perfect time to join the Boulder Concert Band’s audience family. All concerts will take place at 7 p.m. at the First Congregational Church, 1128 Pine Street, Boulder.

About the Boulder Concert Band

The first records of a performing band in the city of Boulder date back to 1870. The Boulder Concert Band was reorganized in 1976 by the late Hugh McMillen, former Director of Bands at the University of Colorado. The current organization has over 70 volunteer musicians from the business, professional, and educational communities in Boulder County and the Denver metro area.