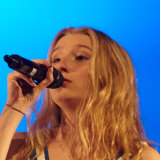 “I love how a culmination of theory, instrument practice, connection with a particular song, appreciation of the tone of an instrument and of so many other things builds to the performance of a piece: a few minutes that reflect the immense work that the process has taken,” she says.

Many independent schools offer high school music scholarships, requiring young candidates undertake both an audition and academic testing before being considered.
Scholarships may cover all or part of a student’s school fees and music tuition. Some schools state which instruments they prefer along with a minimum level of attainment required.

The discipline, commitment and sheer talent common among music and performance scholars sees many of them schooled for free for six years of high school, excel in study and capably work in teams.

Some schools offer music scholarships from an earlier age: from year 4 at both PLC Sydney and at SACS, where entry can be for instrumental or vocal proficiency or those gifted in music theory, says Dr Christian Watson, director of performing arts. “Our music scholar program is a community of music education excellence where our city location allows us to nurture and develop student talent,” he says.

‘‘I love the feeling of creating a piece of music that has a depth, helps people feel, unlocks their vulnerability and joy,” she says.
APGS assistant principal Eunice Chung Lee says the calibre of scholarship candidates is exceptional and that students often show remarkable tenacity about the gruelling workload required.

Students further their skills through hands-on training within the performing arts curriculum and make valuable connections with practicing artists, she says.
That opportunity recently took Holly Riva to the United Kingdom.

“I worked in the heart of the music industry in London, and loved co-writing three new demos for my future album with producers that write and work with incredible artists like Robbie Williams, Britney Spears and Kylie,” she says.

For orchestra and solo scholars, the competition and performance schedules at many schools can include national and international tours.

At MLC School in Sydney’s inner west, successful music scholarship applicants are required to participate in the full music program offered by the school, including the elective music program from years 9-12 – an integrated course of individual performance, ensemble performance, study of musicology, aural development and composition.

At Sydney’s Shore and Knox boys’ schools, several part- and full-fee scholarships are available in year 7 for a range of orchestral instrumentalists.