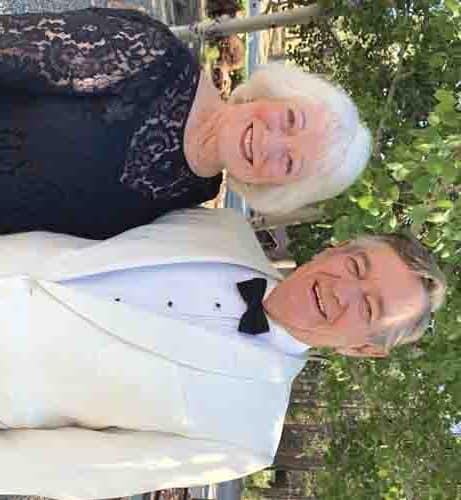 Nancy Walker and Steve Gaghagen star in the Big Bear production of Tenderly: the Rosemary Clooney Musical at the Performing Arts Center September 14-15 and 19-22.

There may be 19 songs including several chart-toppers, but Tenderly the Rosemary Clooney Musical isn’t really a musical, at least not in the traditional sense.

“This is not your typical juice box musical,” co-star Nancy Celeste Walker said. “It’s Rosemary Clooney’s life story as told to her psychiatrist, her ups and downs, addictions, struggles with depression. It’s very personal and poignant.”

Tenderly is a new show written by Janet Yates Vogt and Mark Friedman, at the Big Bear Lake Performing Arts Center six shows only on September 14-15 and 19-22. There’s two performers, Walker as Clooney and co-star Steve Gaghagen as Dr. Victor Monke, yet the audience becomes immersed in the story through script and song. Beth Wheat directs.

Gaghagen gets tasked with playing multiple roles in the show, as Clooney reflects and reminisces on her life during their therapy sessions. At different points he becomes her sister and mother, two husbands, even Frank Sinatra and Bing Crosby. All important people in her life, though Clooney’’s memories may or may not be accurate.

Walker meanwhile recreates Clooney’s music and story, something she’s already familiar with. She’s a longtime Big Bear favorite who several years ago performed Clooney’s music in her outdoor Concert on the Green series.

“I read her bio when I did that show,” Walker said of Clooney, star whose credits ranged from big band and stage to television and the big screen, appearing with the likes of Danny Kaye, Tennessee Ernie Ford, many more. “She was a big influence on my musical style. I adored her as a child. I saw her on television shows and my parents listened to her.

“You really feel for how Rosie went through it all,” she added. “It was a difficult time in her life. But she went to Cedar Sinai and committed herself and turned her life around.”

Much of the story is told through music woven throughout and there’s no shortage of memorable music when it comes to Rosemary Clooney. Songs like “Count Your Blessings,” “Someone to Watch Over Me,” “Some on a My House” and “Straighten Up and Fly Right” come to life through the voices of Walker and also Gaghagen, who gets to show off his talents during several duets.

Little doubt that this will be one of the best opportunities to see Tenderly because Walker and Gaghagen are two of Big Bear’s top talents. Walker, who started singing professionally age 21 and was a noted singer at South Bay nightclubs and venues, twice performed at The White House, performing for both the Clinton and Obama administrations. In 2005 she was asked to sing two songs for the United Nations Ambassador’s Ball during the 60th anniversary in New York City.

Three times she’s sang at the Redlands Bowl in front of thousands. In Big Bear Walker has performed nine tribute shows to Joni Mitchell, Nat King Cole, Clooney and Patsy Cline among others and appeared on stage in many productions for Community Arts Theater Society (CATS), including Steel Magnolias, Cinderella, Senior Class and others.

Gaghagen also has extensive credits, earning awards from Inland Theater League for roles with CATS in shows like Man of La Mancha, Music Man and Carousel among others. The noted Big Bear actor’s rendition of “The Impossible Dream” literally was a showstopper.