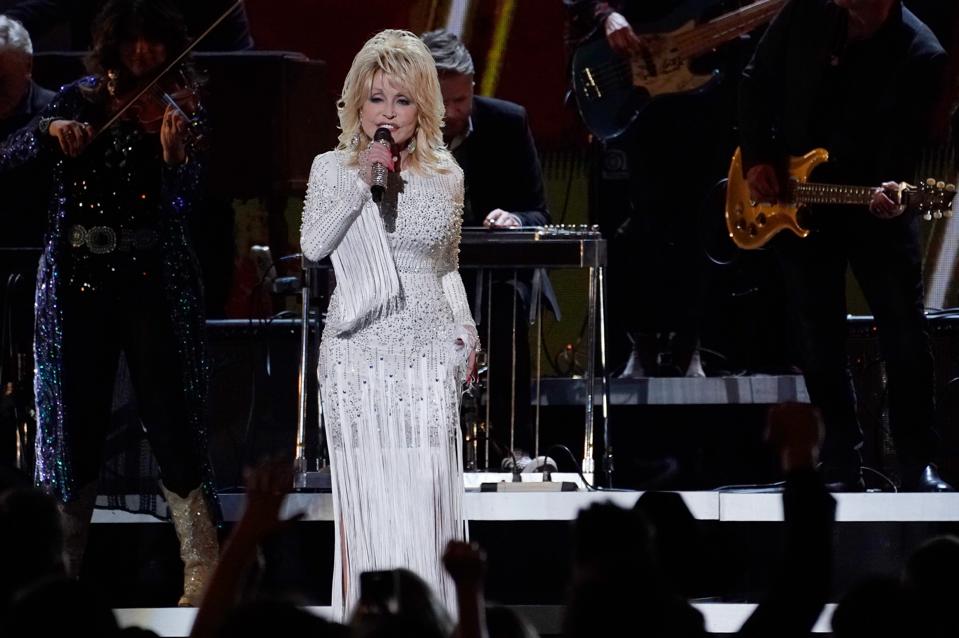 NASHVILLE, TENNESSEE – NOVEMBER 13: (FOR EDITORIAL USE ONLY) Dolly Parton performs onstage at the … [+] 53rd annual CMA Awards at the Bridgestone Arena on November 13, 2019 in Nashville, Tennessee. (Photo by Mickey Bernal/WireImage)

When I started year-end honors a few years ago it was because the best albums and songs of the year don’t do justice to the year in music. And that becomes even more true today in this day and age of music algorithms.

They don’t tell the story of how exciting it was to see Gary Clark Jr. grow into a top songwriter to go along with his dazzling guitar prowess or the joy, as a Springsteen fan, of watching him continue to explore new artistic mediums at 70.

Nor do they capture the vigor of fans screaming with glee on social media at the thought of My Chemical Romance and Rage Against The Machine reuniting in 2020, or the tears of fans saying goodbye to Bob Seger and Elton John on their brilliant farewell tours.

Music remains about emotion. It remains about hearing a song and not knowing why it speaks to you so deeply. These artists I honored delivered emotion and great art in their own unique ways. You can’t measure that in numbers.

Artist Of The Year: Billie Eilish

How dominant was Billie Eilish this year? Imagine if LeBron James averaged a triple-double, led the Lakers to a record 75 wins and they went 16 – 0 in the playoffs. Or if Serena Williams won the grand slam in tennis, winning six – love, six – love in every final. Eilish was the musical equivalent of a grand slam winner in tennis, the unanimous MVP in every sports league, an Academy Award winner in the top moneymaker of all time. I can go on. From her debut album, When We Fall Asleep, Where Do We Go, to her Coachella set to sold-out tours, Elish lived up to every moment put in front of her. But the most impressive thing about her is how she handled it all. She relished the challenges, having fun, galvanizing her fans and creating a new generation of music zealots all while demonstrating the poise of someone who had been in the public eye for decades. As I wrote when I saw Eilish at the Fonda in 2018 the most exciting thing was seeing fans sing every word because she spoke for them. Well, in 2019, she accomplished the same, but doing it for millions. And in how she handled the pressure she inspired her fans, musicians, actors, everyone she came in contact with, making everyone from Julia Roberts and Dave Grohl to six-year-old kids an Eilish fan. Going back to the sports analogy Eilish is the slam dunk choice for artist of the year in 2019 and no one else is even close.

Trailblazer Of The Year: Bruce Springsteen

How do you follow a record-breaking Broadway run that no one had ever tried before, a best-selling memoir and a critically acclaimed Netflix concert film? If you’re Bruce Springsteen you release a brilliant new album in Western Stars and when you don’t want to tour for it you turn it into a stunning theatrical documentary/concert film that marks your directorial debut (co-directed with Thom Zimmy). All while turning 70 this year. Maybe the adage was wrong, maybe you can teach an old dog new tricks. or maybe it’s just that Springsteen is unique. Whatever the case might be at an age when artists are supposed to be resting on their laurels Springsteen is enjoying a creative renaissance that enriches his fans, his legacy and seemingly, most importantly, himself.

Icon Of The Year: Dolly Parton

Seemingly the only thing we can agree upon in 2019 is that we can’t agree on anything. The world is more divided than it has been in centuries. So we grasp onto any little thing that unites us. And one thing that unites us is the ageless Dolly Parton. Regardless of age, political party, gender, sexual preference, ethnicity, everyone agrees that Parton is an icon. And man did she drive home that point in 2019, co-hosting the CMA Awards, creating Heartsrings, a Netflix series around  some of her best-loved songs, an NBC special celebrating her 50 years at the Opry and more. What makes Parton such a joy and inspiration is that she never loses her smile, she seemingly has fun with everything she does. And in the dark days of 2019 that is the greatest gift she gives her fans.

Gary Clark Jr. was already a critical favorite and one of the greatest guitarists on the planet coming into 2019. But, as I told him, when we spoke earlier this year, on This Land the songwriting and the playing finally came together. The result was a sold-out Hollywood Bowl show and four deserved Grammy nominations, including Best Rock Song and Best Rock Performance for “This Land.” Going back to the sports analogy, Clark is 2019’s equivalent of the NBA’s most improved player. The talent was all there but this year he became  an undeniable music all-star.

The National have consistently been one of the best touring acts in music for over a decade. And they delivered another masterpiece this year in I Am Easy To Find. So it was brilliant that the band did a brief tour introducing the new album, complete with the guest vocalists. Their L.A. show at the Orpheum was easily one of the top 10 shows of the year and was a superb way to showcase the new album. That was followed with a more conventional tour, including a standout show at L.A.’s Greek Theater. Another banner year for one of the most dependable acts in all of music.

As brilliant as the Chris Cornell tribute show in January of this year at L.A.’s Forum was, and it was astonishing, the nerve and talent it took for Brandi Carlile to tackle one of the greatest albums of all time by herself was astonishing. And doing it in front of Mitchell, as well as Elton John and more, only added to the hugeness of the moment. As impressive as Carlile’s Grammy moment and breakthrough were, as I wrote after this Disney Hall show, triumphantly pulling off Blue in this setting will be seen as the biggest milestone from this era in her career years from now. I say this era only because it is guaranteed Carlile has many, many more triumphs coming in the future.

This might have been the hardest category to pick in what was a great year for music movies. And I’m not talking about music biopics. With the streaming wars heating up and the continual need for content music documentaries continue to impress. But in a year when the Band documentary Once Were Brothers dazzled, and Springsteen’s Western Stars shone, the candor of the David Crosby documentary Remember My Name absolutely astonished,  Moving, inspiring, heartbreaking and at times funny, Remember My Name was a brilliant look into a complex life of a rock icon.

Over the last few years farewell tours have become a major part of music, with everyone from KISS and Ozzy Osbourne to Paul Simon saying goodbye to the rigors of the road. Two very different all-time greats in Elton John and Bob Seger have joined that list. And both began or said their goodbyes in their signature styles. But while John’s show had much more flair and Seger said his goodbye without a lot of production, each delivered beautiful farewells with the right amount of heartfelt sentiment and classic hits. Both Rock And Roll Hall Of Fame left their sold-out crowds smiling, singing along and wanting more, which is the way a legend should go out.

There are a lot of reasons to be excited about music in 2020, including the just announced Alanis Morisette tour with Garbage and Liz Phair. But the news that first My Chemical Romance, who are making their reunion technically late this year at the Shrine in L.A. December 20 before more dates next years and Rage Against The Machine are reuniting have rock fans counting the days until 2020. The thought of Rage Against The Machine once again leading 100,000 fans in a political revolt under the desert skies at Coachella is enough to make one giddy with excitement. Imagine a new generation screaming, “F**k you, I won’t do what you tell me,” and in this politically charged environment of an election year, it will be a rock and roll moment for the ages.