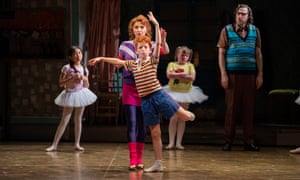 There might not be a musical easier to love than Billy Elliot.

The story of a young boy who just wants to dance, from a village brought to its knees by the UK miners’ strike of 1984-1985, Billy Elliot is fuelled onstage by its movement. And it moves very well indeed.

Based on the 2000 film written by Lee Hall and directed by Stephen Daldry, the musical – also written by Hall and directed by Daldry, with music by Elton John – is back in Australia a decade on with a replica touring production. It remains a refreshing charmer that refuses to put on airs, but contains many genuine moments of grace.

When Billy (the role is shared by four boys: Omar Abiad, River Mardesic, Wade Neilsen, and Jamie Rogers, who played the part on opening night) stays late in the town hall after a boxing class, he finds himself in the middle of a community ballet lesson. That’s all it takes for his little world to spin around and open up. Teacher Mrs Wilkinson (a wonderfully tough Kelley Abbey) sees genuine potential in this rough-as-guts working class kid, and it’s not long before she’s giving him private lessons and organising an audition with the Royal Ballet School.

It’s a good outlet for Billy, whose family has been struggling since his mother died. His father (a moving Justin Smith, who played Tony in the last Australian tour) and older brother Tony (Dew Livingston, proud and brash) are coal miners who staunchly support the strike, and they don’t quite know what to do with this little boy in their care – or his eccentric Grandma (a blithe Vivien Davies), either.

Sometimes, in small towns, difference can feel like the most isolating and impossible thing in the world. Billy’s friend Michael (James Sonnemann on opening night) is another different kid, although he enjoys this about himself – and is shrewd enough to keep extremes hidden from other villagers. In the joyous Expressing Yourself, Michael dances in his mother’s dress with Billy and a series of anthropomorphised dancing articles of women’s clothing. It’s a giddy, proud ownership of young queerness, and 10 years and a marriage equality vote later, it still holds up.

Much of the show does. Its sweetest spots are still its strongest: Billy’s dream ballet with his older self; Billy and Mrs Wilkinson reading aloud a letter from Billy’s late mother; a father’s sacrifice to support his son; the invaluable pleasure of watching a stubborn, confident little girl (Mrs Wilkinson’s daughter Debbie, played by Gabrielle Dagger on opening night) put everyone around her in their place.

Some musicals can’t resist wanting to safeguard their audience against the real world, particularly the grim realities of work and of class struggle, but there are outliers, and like The Pajama Game, Rags, and Newsies before it, Billy Elliot is a story about a working conflict, a union and a strike. Characters gather at makeshift soup kitchens; children run around at union meetings. And it’s through the strike, which is given even more dramatic heft onstage than in the film, that Billy Elliot resists feeling or becoming a slight. It raises the stakes of Billy’s dream even higher; a working class kid from a mining town doesn’t go to London to learn to dance. It’s almost inconceivable to the villagers, including Billy himself, and it seems in direct opposition with the spirit of the strike. But because there should be bread and roses too, no one can resist the call of Billy’s dancing spirit for too long.

And because this is a show about dance, everyone dances. Miners face off against cops in long, opposing lines, weaving in and out and around each other in uneasy coexistence while the air grows thick with the dread of violence. Daffy amateur ballet classes collide with union meetings. Kids break into tap with happy abandon; Billy resolutely finds a spot on the wall and fixes on it until he finally, breathtakingly, masters the pirouette.

The boys who play Billy are onstage nearly constantly, are in near-perpetual motion, and have to chart a difficult, vulnerable character arc that, as it gets harder and more complex to play, features more difficult dance – another way of charting growth. It’s a lot to pull off but Rogers, at just 12, brought a real spark to opening night. There’s a sense of community onstage too – children wind comfortably around the gatherings of adults, and you can’t help but feel like they’re being looked after, not just by the adult characters, with all their gruff bluster, but by the company too. It lifts Rogers up; it lifts everybody up. And that synergy elevates the musical and makes it all the more enjoyable to watch.

The score – even with the Elton John of it all – is on the ordinary side, more anodyne folksy soft rock than blazing earworm, but a musical is more than the sum of its parts, and Billy Elliot is most effective as a whole. That score provides the beating heart for Peter Darling’s breathtaking choreography (overseen in Australia by associate choreographer Tom Hodgson) and never steals its thunder; the dance is the rightful soul of the show. The gravity and character work of the dance means there’s breathing room in the book to be cheeky and clear. And because those two storytelling arms are so strong, the show can reach out and collect the temperature of the times, letting Billy Elliot foreground collective action, showing how it works in the world of the show. It’s a compass, pointing to the characters’ hearts and reminding them that they are stronger, and better, when they look out for each other. No matter who they are or what they need.