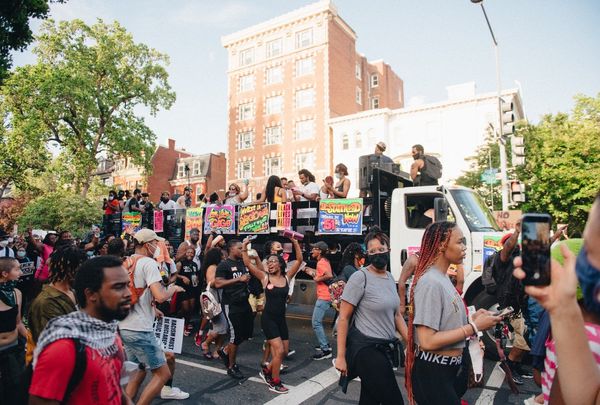 Every movement has a soundtrack. The Civil Rights Movement‘s included the promise of “We Shall Overcome” by the late activist and folk singer, Pete Seeger. The profanity of N.W.A.’s “F**k tha Police” provided foresight to the L.A. riots of 1992 after the beating of Rodney King. Kendrick Lamar’s 2015 “Alright,” delivered a myth that defied reality; anchoring our imagination in something monumental, majestic, and joyous.

Music has provided a tempo for moving forward, despite circumstances, throughout history. As communities come together to protest yet another episode of state-sanctioned violence, this time they’re calling for justice for Ahmaud Arbery, Breonna Taylor, and George Floyd. Now, there is another sound unifying the people here in Washington, D.C., and that’s Go-Go, the city’s indigenous art form. Everything about Go-Go’s drum beat is meant to disrupt.

Justin “Yaddiya” Johnson, an activist and organizer of Moechella (the name comes from the mixing of Moe, a popular Black D.C. slang used to refer to a friend or associate, and “chella” after the West Coast music festival Coachella.) is using the power of Go-Go to bring people together in the fight for Black lives. His latest installment: Go-Go To The DOJ, featured a shuttle bus where TOB, a local bounce beat band, blasted music. Over the past weekend, people young and old were inspired to join the movement, as the shuttle made its way down to the newly minted Black Lives Matter Square, the section of 16th Street across from the U.S. Capitol.

“There are different steps to change, and I think we’ve taken the first step which is to show dissent and be out there in the streets and showing that we are not going to stand for injustice any longer,” Johnson said.

It was a state-sanctioned moment of jubilee in the middle of a protest, a place of Black joy. Complete with food trucks and folks dressed in their finest of festival attire. Proof that during a time of both political and social uncertainty many look to artists for solace and ways to make progress. “I think that artists are real politicians. Politics are all about influence, and most people don’t understand the politics or policy or how things work, so people just go with whatever sounds the best or looks the best. Artists have the most power, and politics are about what? Power,” Johnson said.

Johnson plans to keep the momentum going this summer, featuring a different band each time. “When a Go-Go band performs they bring their whole audience with them because people follow Go-Go bands like sports teams, so it’s like they follow them wherever they go,” said Dr. Natalie Hopkinson, a Go-Go scholar, and Professor at Howard University. Ensuring that the music is engaging with a wide variety of age groups is essential to it’s staying power.

“Go-Go has a long history of really taking back the power, just the fact that it exists is resistance, just the fact that you have this art form that is Black-owned, local, that holds an economy around it is also resistance,” Hopkinson said. The art form was born after Martin Luther King, Jr. was assassinated and riots swept through Memphis over four days in April of 1968. The chaos and mayhem provided a platform for Go-Go music, Hopkinson notes in her book “Go-Go Live: The Musical Life and Death of a Chocolate City.”

Chuck Brown, the Godfather of Go-Go, and the Soul Searchers introduced the congo-infused blend of funk and R&B. Go-Go music became the people’s music, language, economy, and, in some instances, a community news network. However, last spring, Go-Go was brought under fire, and thus The Don’t Mute D.C. movement started after residents in The Shay, an apartment building in the Shaw neighborhood filed a noise complaint against Central Communications, MetroPCS, on the corner of 7th Street and Florida Avenue NW for blasting Go-Go music. The intersection became ground zero for the latest cultural battle. The music has played outside of the store since the beginning of time, 1995 to be exact, serving as an unofficial landmark for D.C. natives.

Beyond the music, it was about gentrification, the genocide of a people’s cultural language. Go-Go was heavily policed in the early 2000s by the media for being synonymous with the increase in violence around the city. As a result, it was largely pushed out of D.C. and into neighboring Prince George’s County. The fight to continue playing Go-Go music outside of the MetroPCS store was about making sure that how people express their power was not taken from them, and degraded as simply noise.

A Howard University student came up with the digital war cry: #DontMuteDC to spread the word. Over 80,000 people signed the “Don’t Mute DC Go-Go Music and Culture” petition created by Hopkinson and activist Ronald Moten. In June of 2019, city council member, Kenyan R. McDuffie offered up a bill that would make it the official music of D.C., and earlier this year the bill was passed.

Further galvanizing the success of the bill’s passage was Moechella, which came into consciousness at the intersection of 14th and U streets during the Spring of 2019. Johnson gave the movement the hashtag #LongLiveGoGo, bringing together a diverse crowd almost every week to demonstrate Go-Go’s staying power while invigorating a new audience of listeners. No stranger to using music as a means of protest, Johnson spent much of 2018 emceeing in Lafayette Park in response to President Donald Trump’s ignominious Helsinki Summit.

Next up is the Million Moe March, a play on the Million Man March. It’s slated to take place on Juneteenth, the day African Americans were notified of their freedom in 1865. “Juneteenth is about freedom so it’s about how we get the rest of the way there because we aren’t there,” Hopkinson said. “When you think about Black joy as resistance, I think Black music is one of those things because we’re specifically free at that moment. People keep coming back to it because you don’t have to worry about the woes of the world at that moment,” she continued.

Go-Go provides the type of joy you have to reach down deep to find while weathering two pandemics at once, Covid-19, and the vicious reminder that systemic racism takes no breaks. “Go-Go music has been away for our people and our city to survive in really difficult times, so Go-Go has always been political,” Hopkinson said. This art form lifts as it mobilizes.