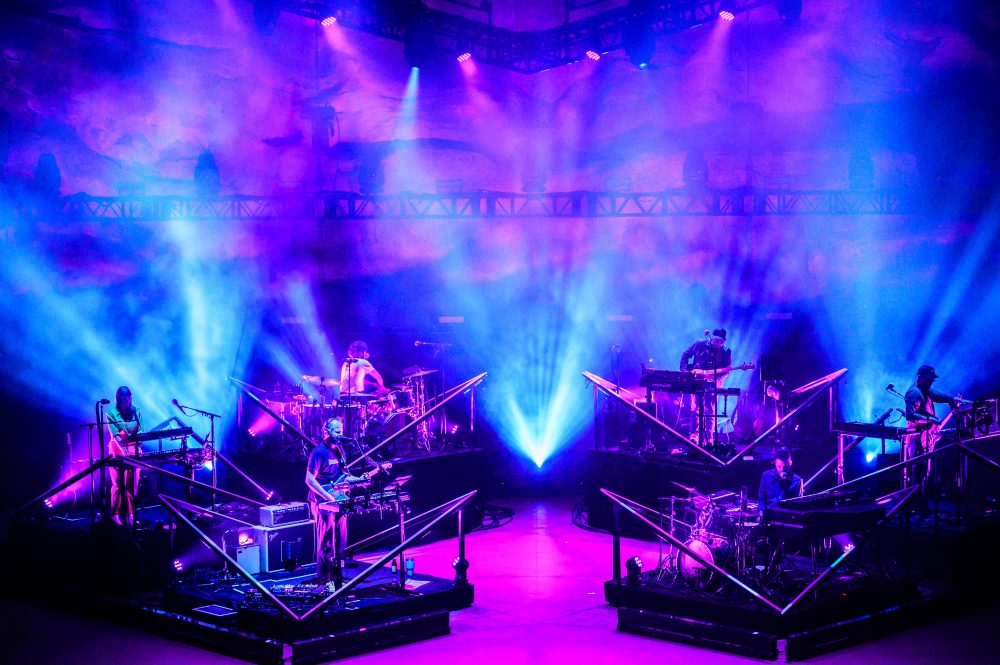 Think of Bon Iver, the indie group fronted by Justin Vernon. In 2012, they won a Grammy for Best New Artist, beating out rap artist Nicki Minaj. Their discography includes two records, a six-year hiatus and two more records, including their most recent “i,i,” released song by song, countdown-style, in August this year. Their genre-bending, atmospheric compositions evoke winter snowscapes, or the feeling of flying cross country as the sun sets, or the mood of a long mountain drive with friends.

Now place Bon Iver in the beautiful setting of Red Rocks Amphitheatre, a concert venue so phenomenal that an award is named for it. Make it a warm late summer night, with just a few raindrops falling at seemingly choreographed moments throughout the show. Throw in a variety of fashion, from streetwear to pure boho to even some iridescent raver tights. Open it up with the raw rock tones of Sharon Van Etten, emulating Joan Jett, Bonnie Raitt and K.D. Lang simultaneously, while sporting a straight-cut, shimmering suit that practically overstaged that of Michael Jackson’s.

Welcome to the show.

In some ways, Tuesday night’s show was everything a seasoned Bon Iver fan would expect. Justin Vernon’s musicianship is evident in both his recorded and live performances. He very clearly slid into a “flow” state on stage; at many points, it seemed as though he’d lost track of time, of space and of his own body, simply dissolving into the music. And the band as a whole sounded phenomenal, with six musicians in total, each one staged on their own platform, bound by a polygon of LED lights.

Bon Iver surpassed expectations further than anyone could have anticipated. The concert gave a whole new meaning to the concept of live performance. Most of the songs are quite heavily produced in recordings – even when it’s just Vernon and his guitar.

Each track played was actively pushed against the tendency to emulate the recordings. The group performed every song via crossfade, blending songs from different albums together in a paradox of raw and ethereal sound. Liberal use of bass drums danced with delicate keyboards, guest appearances from a harmonica and a wood shaker and more saxophone than anyone expected. In-the-moment production blended in synthesizers and select samples to fill in the few gaps that live instruments could not. Interludes kept the energy flowing between tracks and allowed for band members to switch frequently between instruments. Vernon’s haunting falsetto, as well as some copious speak-singing and even a bit of guttural yell-singing, weaved throughout the set. Backup harmonies, notably by Wye Oak member and multi-instrumentalist Jenn Wasner, glued it all together.

Well choreographed light shows help turn the night into an ethereal experience, almost mimicking salvation that some feel when going to church; the sentiment of Bon Iver’s lyrics ricocheting around the amphitheater with Vernon’s belts and pleas. Each Bon Iver record is a masterpiece. However, it is clear that the live renditions were Vernon’s intended form.

The temporal separation between their albums gives Bon Iver a fanbase encompassing multiple generations, as was evident in the crowd.  Encompassed in the concert as a whole conjures emotion and feelings from the opener Sharon Van Etten.

The Red Rocks gig included an array of deep cuts as well as a multitude of tracks from the band’s latest album. Bon Iver dove deep into their catalog with the likes of “Michicant,” “Holocene,” “Towers” and “Perth.” They even burrowed further into their first album “For Emma, Forever Ago” to share the more upbeat “Lump Sum.” With the plethora of deep cuts provided, Bon Iver left fans surprised yet satisfied when they decided to cut fan-favorite “Skinny Love” from the setlist. Needless to say, concert-goers still left pleased having shared a communal experience of a lifetime.

But the experience isn’t only apparent at Bon Iver’s live shows. There’s a way to connect through “i,i” with other listeners, thanks to a partnership between Bon Iver and Spotify. Their ViiSUALiiZER website shows who’s listening, from where and some trends.