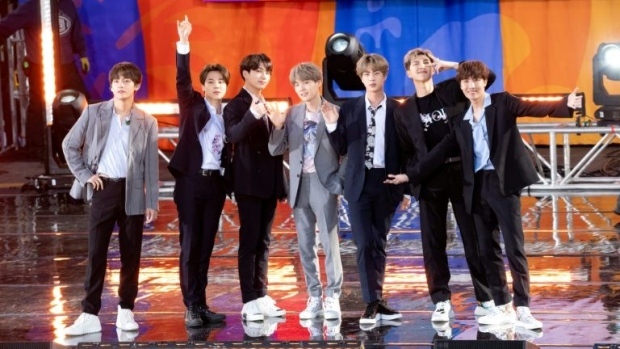 The fate of K-pop superband BTS’ roaring global music career with the full seven-member lineup is up in the air as the South Korean government is in the final stage of revising the country’s controversial military duty exemption system.

Jin, BTS’ eldest member whose legal name is Kim Seok-jin, is required by the military service law to enlist in the armed forces by 2020 when he turns the age of 28.

All-able bodied South Korean young men are compelled to serve in the military for about two years for the national defense against North Korea, with which the South is technically at war since the 1950-53 Korean War ended in a ceasefire, not a peace treaty.

If Jin enters the military next year as scheduled, it will necessarily put the six-year global music career of BTS as a seven-piece boy band on temporary hold amid the absence of the eldest member.

(AFP)
The next year, another BTS member, Suga, who is one-year younger than Jin, will also be required to start a mandatory military term, creating an even bigger void.

Appearing on an American TV interview in April, Jin also briefly referred to the possibility of military enlistment.

“As Koreans, it’s natural. Someday when duty calls, we will be ready to respond and do our best,” he said in the interview with CBS’ “Sunday Morning.”

The two-year military service has often been one of the grimmest risks to the high-flying careers of young South Korean actors and singers who are forced to take time out of their prime years to fulfill the duty.

In comparison, award-winning South Korean sports stars or classical musicians under the current military exemption system are given a military service waiver in recognition of the roles they played in “promoting Korean culture and elevating the reputation of the country.”

Every year, some 30 to 40 sportsmen and artists benefit from the waiver system, aimed at helping them dedicate themselves to their lifelong careers without disruptions. The list includes Tottenham Hotspur forward Son Heung-min and South Korean pianist Cho Seong-Jin.

A major debate on the system’s partiality was set off last year, and since then a government task force has been discussing ways to revamp the system.

As the TF is nearing the final stage of its mission, multiple lawmakers came forward to push the government to include award-winning pop artists in the military exemption list, including, most notably, BTS.

“In fact, (classical and fine arts) artists are granted an exemption if they win more or less than the second-highest prize at an international competition,” Rep. An Min-suk said during a parliamentary audit.

The current military waiver standard was designed in the 1970s, and the standard is no longer applicable to today’s environment where the wall between pop arts and fine arts is obscure, according to the lawmaker of the ruling Democratic Party.

“In terms of elevating national reputation, (BTS’) topping of Billboard charts made as much contribution as did Olympic gold medals,” An noted.

With the band’s globally sensational hit songs sung in the Korean language and employment of traditional Korean cultural elements for its music presentation, the septet has practically served as one of the highest-profile private ambassadors of Korean culture.

The band’s roles were recognized also by the government, which awarded a revered cultural medal to the band for its roles in promoting Korean culture and the language worldwide.

“(The government) needs to consider making a military service waiver available to K-pop (stars) as part of providing an incentive for the development of cultural content,” another ruling party lawmaker, Kim Byung-wook, said in a separate parliamentary audit session last week.

Kim also referred to a research result that put the value of the economic effect BTS creates annually at 5.6 trillion won ($4.8 billion).

Despite such calls, the government has been reported so far to have dismissed the option to excuse BTS or other potential pop artists from the national defense duty as it is preparing to finalize its mission.

Speaking to the National Assembly on Monday, Culture Minister Park Yang-woo said, “I have heard that it is difficult to set the standards (for exemption) in the popular arts field because there are no clear international or domestic competition events like the sports or classical music worlds have.”

But the issue is expected to recur constantly to press the government, going forward, as K-pop stars continue to make global hits and bring K-pop to the forefront of the global music scene. (Yonhap)