Independent music venues, along with other arts and entertainment groups, were among the first businesses to close their doors as a result of the Covid-19 pandemic. Being in phase four of the reopening plan, they’ll be among the last to reopen.

The longer they remain closed, it gets closer to disaster for these venues, among them such long-serving area businesses as Mohawk Place, Town Ballroom, Buffalo Iron Works, Sportsmen’s Tavern, Rapids Theatre, Rec Room and Tralf Music Hall, all of whom number among the charter members of the National Independent Venue Association (NIVA). The organization was launched in April by Dayna Frank, CEO of First Avenue in Minneapolis; Gary Witt, executive director of Milwaukee’s Pabst Theater Group; and Rev Moose of Marauder Management.

The 1,600 venues in 50 states NIVA represents all face the same quandary – their revenue streams have run dry, while their financial obligations and costs remain and continue to accrue.

According to Pollstar, the industry will lose $9 billion in ticket sales if venues remain closed through the remainder of 2020, plus losses in beverage and food revenue. The longer shutdowns continue, the closer these businesses get to not being able to reopen. They’ll need financial assistance to survive. If they don’t get it, it’s likely that the cultural landscape of Buffalo and the entire country will be all but unrecognizable within a year. 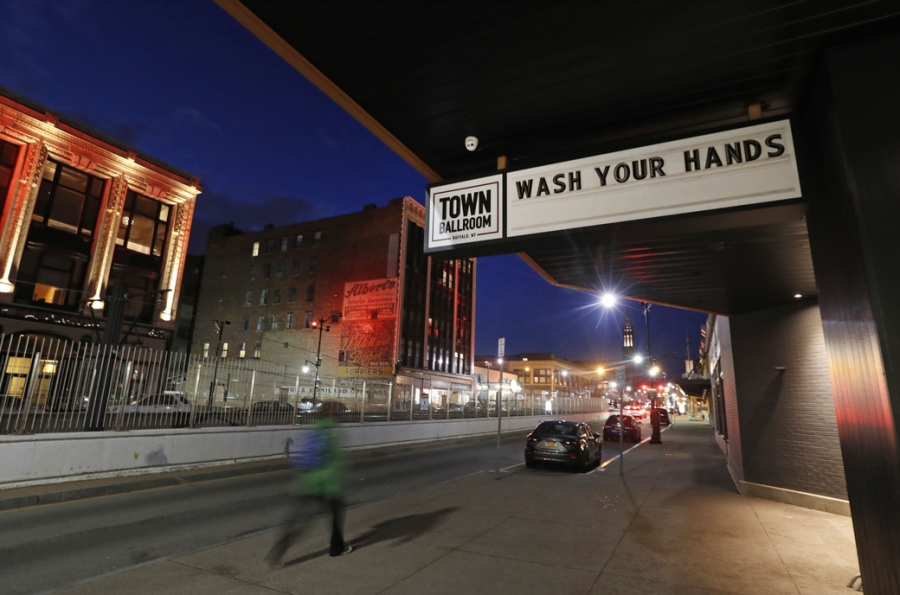 The Town Ballroom is one of several area venues to join the National Independent Venue Association. (Robert Kirkham/News file photo)

The music business is haunted by the ghosts of good intentions.

It has ostensibly been the purview of artists and artistic types, dreamers who have on occasion turned those dreams into a means of making a living, but just as often, have failed in spectacular fashion. It is not the sort of industry that is generally associated with clear-eyed focus, unified vision and a consistent, disciplined approach to problem-solving, at least in the common popular conception. This is particularly so when it comes to the independent, noncorporate sector of the industry.

But as it stares down the most severe existential threat it has ever faced, the independent music industry has proven itself to be far from a bohemian enclave with its collective head in the clouds.

Beneath the banner of NIVA, what was at first a loose collective of independent music venues and promoters scattered across the country has come together as a unified front. They’ve enlisted Akin Gump, one of the most successful lobbying firms in the country, to assist them as they target Washington for the federal aid they claim represents their sole hope for survival in the current crisis.

“With the commercial entertainment business heavily driven by corporate conglomerates, the independent and smaller venues and organizations have not historically been given the attention or credit they deserve,” Artpark executive director and NIVA charter member Sonia Clark said. “NIVA is helping organizations such as ours present a unified voice and demonstrate on a broader scale that we are vital components of the greater entertainment and small business ecosystem and collectively generate significant economic impact.”

Clark added that while Artpark generally operates on a larger scale, she sees the current struggle as underlining the interconnectedness of every venue along the indie food chain, from nightclubs with 100 person-capacity to amphitheaters that holds thousands. “We also appreciate that those artists that perform on our amphitheater stage before 9,000 people once developed their craft in a small venue, thanks to an independent promoter that gave them a chance.”

“Fear for our collective existence”

On May 4, charter members of NIVA received an email from the organization.

“This is a week that will transform our movement,” the email began.

“As we gain momentum & bi-partisan support in D.C., it’s time to bring our message to our elected officials through our dedicated fan bases across the country. We have always worked with unyielding diligence and creativity to promote our shows and events. Now we must take our knowledge and apply it to these efforts to seek the relief we need to save our industry.”

“Our entertainment hubs are important economic multipliers for our local economies and tax bases as employers and tourism destinations, and revenue generators for neighboring businesses such as restaurants, hotels, and retail. One Chicago impact report estimated that for every $1 spent on a ticket, a total of $12 in economic activity was generated. In New York City alone, our ancillary impact is more than $500 million. While we are small businesses, the estimated direct annual economic impact we bring to our local communities is nearly $10 billion.”

“Many of our members … are historic, iconic institutions that have withstood normal business cycles and economic hardships. Our passionate and fiercely independent operators are not ones to ask for handouts. But because of our unprecedented, tenuous position, for the first time in history, there is legitimate fear for our collective existence.”

A plea for help

While  local member venues eagerly embrace NIVA’s lobbying power and feel that there is both strength and comfort in its numbers, so far, there has been no indication that help from the federal government will be forthcoming.

“The conversations have started, but unfortunately, we don’t know of anything specific secured at this point,” said Artpark’s Clark, who is presiding over a not-for-profit venue that, she said, is still susceptible to the whims and winds of industry-wide trends. “As a not-for-profit, our structure and resources differ from those of a for-profit entity, but the economic realities are just as delicate, if not more so.”

Adrianne Salmon, marketing director for Buffalo Iron Works, one of the first Buffalo venues to become a NIVA member, remains hopeful of change and help.

“There certainly is a lot of hope that our federal government will step in and lend some help in the form of grants or additional loans,” Salmon said. “It’s really hard to imagine that they would stand by and let the independent venues fall by the wayside. I think we can all agree they are essential to the entire music industry.”

How WNY music club owners are coping: ‘Fans will be back’