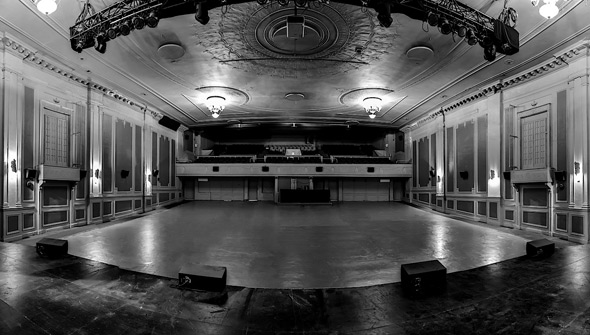 The interior of The Danforth Music Hall as seen from the stage.

The building that is home to The Danforth Music Hall celebrates is 100th anniversary on Saturday, Aug. 17.

A special celebration in front of building, at 147 Danforth Ave. just east of Broadview Avenue, is slated for 12:30 p.m. on Aug. 17 featuring cake and a presentation by the City of Toronto.

Built in 1919 as Allen’s Danforth, it was part of the Allen Movie Theatre Chain. The movie theatre officially opened its doors to the public on Aug. 18, 1919 and the first movie screened was called Through The Wrong Door.

In 1923, Famous Players bought most of the Allen chain’s theatres including the one on Danforth Avenue.

It was renamed The Century and remained operating as a movie theatre under that name until the late 1960s. After that, the theatre was renamed The Titania and showed mostly Greek-language films up until 1978.

In the late 1970s, it became a popular venue for live music and was named The Music Hall. Along with concerts it also showed second-run movies and became part of Toronto’s Festival Chain of theatres.

In 1985, the building was designated as a property of historic interest under the Ontario Heritage Act.

The new millennium saw the building face a number of challenges. It was closed in 2004 and remained so for about a year and a half. It then reopened in 2006 as a music venue.

It was closed again in August of 2010, but reopened in its present incarnation as The Danforth Music Hall in December of 2011.

As The Danforth Music Hall under the ownership of Impresario Inc., it has played host to concerts by both music legends and up and coming bands and artists. Some of the famous acts to have played there this decade include The Tragically Hip, Justin Bieber, Rihanna and Lorde.

Helping the Danforth Music Hall celebrate its 100th anniversary this weekend will be The New Pornographers with a concert on Saturday, Aug. 17, night.

For more on upcoming concerts at The Danforth Music Hall, please visit www.thedanforth.com