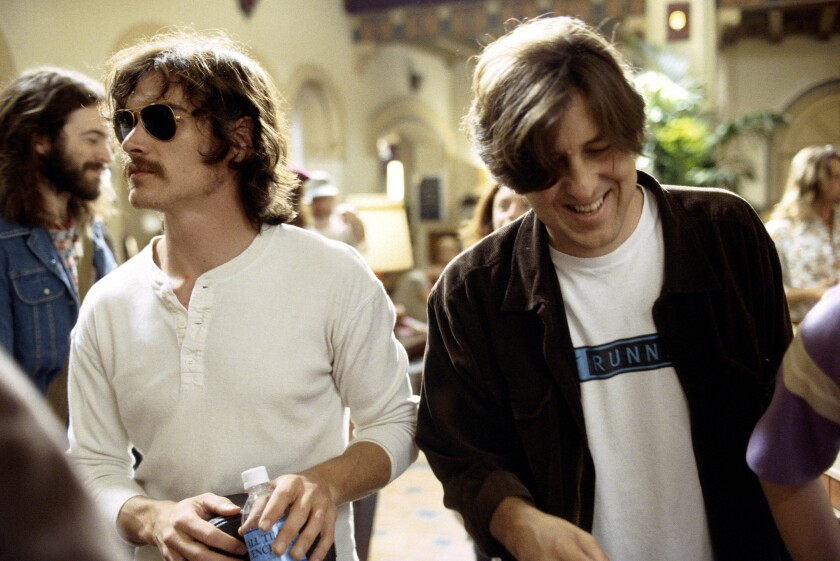 Cameron Crowe’s phone sounded just before midnight. It was a lengthy text from Casey Likes, who portrays a teenage version of the journalist-turned-director in the musical adaptation of “Almost Famous.”

“Hey Cam, sorry it’s so late,” the message read. “Whenever you can, I’d love some help. What was it like being a journalist during this time? What were your goals at that time? What were your goals with your life? Why did you want to write these things? Like, was there a higher goal you were trying to reach? And also, how did you present yourself? What was the most important thing you felt you needed to prove? Sorry for all the questions, they just popped in my head.”

Crowe wrote him back immediately. “Killer questions, Casey. The very thing that makes you ask these specific and great questions is probably very close to why I became an interviewer: to follow my instincts and be a fan of what I loved. You were on the right track, and I will tell you more tomorrow. Can’t wait.”

It’s rare that actors have access to a source material via text, but such is the case with the “Almost Famous” musical, making its world premiere this month at San Diego’s Old Globe Theatre, blocks away from Crowe’s childhood home. He has adapted his Oscar-winning, semi-autobiographical screenplay into the show’s book and lyrics. He even showed the cast around the Pechanga Arena San Diego, formerly the San Diego Sports Arena, the venue that’s seen in the film and the place where he first rubbed shoulders with Yes and Black Sabbath and Wild Turkey nearly 50 years ago.

“He brought us to the dressing rooms and the hallways where he met everyone, and he’s so excited about everything,” Likes recalled of the arena tour. “It’s really helped give me the headspace of where he was at the time. I’m discovering how confident Cameron really was, the guts he had to get out there and ask these questions, even though he was so young.”

Billy Crudup as Russell Hammond with writer-director Cameron Crowe on the set of the “Almost Famous” film, which Crowe described as a project “made 20 years ago about a time 20 years before that.”

Released in 2000, the movie starred Patrick Fugit as William Miller, a newbie rock journalist who shadows a band on a cross-country tour and gets an inside look — albeit with the naivete of any 15-year-old fan — at the treasured turmoil that was 1970s rock ‘n’ roll. It’s simultaneously a coming-of-age story and a nostalgic love letter to a very specific time and place; William essentially finds his voice amid a scene fading fast.

To Crowe, the juxtaposition is primed for the stage — possibly one on Broadway in the future. “This is a story about being a fan of rock music at 15, and of feeling like you found a place where you belong,” he told The Times excitedly. “Musical theater fans are like that. They’re as adamant and strict and loving as the people that loved rock when I was growing up. So to tell a story about being a fan to that audience is perfect.”

It’s all happening — but how, exactly? Is it possible to bring an R-rated drama, laden with sex and drugs, to the generally family-friendly form of musical theater, without betraying a source text rooted in authenticity? Can the movie’s critically-acclaimed nuance about vulnerability, loneliness and growing pains translate to a two-act musical in which characters sing out their feelings?

“When adaptations don’t work, it’s either by not understanding the spirit of the movie or by being too literal, and everybody sort of has a dreary evening and really wishes they just rented the movie again,” said director Jeremy Herrin, who caught Crowe’s eye with his “People, Places & Things” staging off-Broadway. “There’s a small target area to refresh the narrative and tell this story in a way that is uniquely theatrical. It’s easy to do something that’s derivative, but we want to do something that is shoulder-to-shoulder with the movie.”

The strategy begins with the music, “represented with the same kind of freshness that it felt like in the day, not through the filter of decades gone by,” said Crowe. The score — played by a 12-piece band with three electric guitars — includes songs from the film’s fictional band, Stillwater (and written by Crowe and his then-wife, Nancy Wilson, on their honeymoon).

Plus, the needle drops from its Grammy-winning soundtrack (Led Zeppelin, Lynyrd Skynyrd) and hits of the time period (Joni Mitchell, Deep Purple) are now full-fledged musical numbers. The movie’s memorable sing-along sequence, starring Elton John’s “Tiny Dancer,” has evolved into a layered act-one closer, sourced from the scene itself while also pushing forward the story of those singing it.

Additionally, original songs explore these beloved characters’ internal monologues, like William’s attempts to befriend band members while maintaining his journalistic integrity, his first sexual experience at the hands of multiple female groupies, and his mother’s struggle to let go of her son as he faces the dangers of the world — rock ‘n’ roll or otherwise. 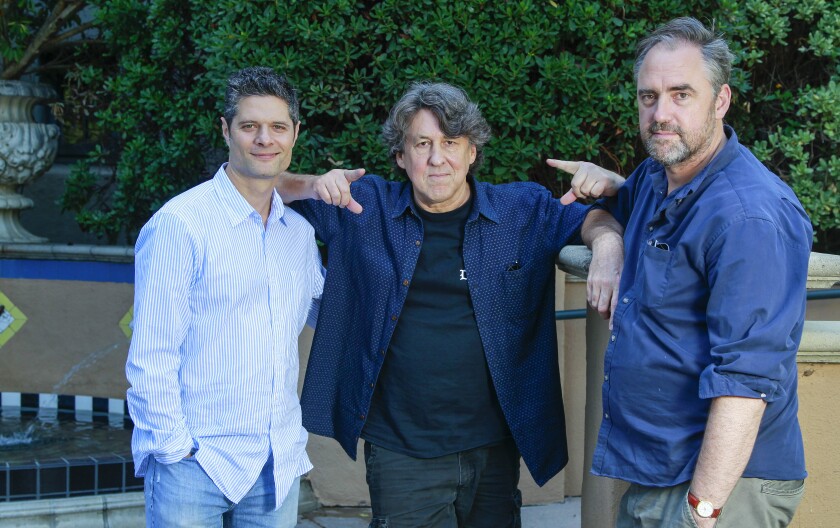 “I told the actors: Ask me anything, because I could give you more than you ever saw in the movie,” said Crowe, flanked by composer Tom Kitt, left, and director Jeremy Herrin outside the Old Globe Theatre in San Diego.

Even the intimate conversations between brooding guitarist Russell Hammond (Billy Crudup) and devout disciple Penny Lane (Kate Hudson), held entirely behind slammed hotel doors onscreen, take center stage. One new duet outlines how the couple (played by Colin Donnell and Solea Pfeiffer at the Old Globe) first met, and that they bought her signature shearling coat together at an antique store.

Such new details cast a revisionist light on the mysterious, free-spirited Penny Lane. Though Hudson’s Golden Globe-winning performance “is so delicate, authentic and accomplished,” wrote Times critic Kenneth Turan in his review at the time, Crowe has been criticized over the years for creating a problematic male fantasy, a “manic pixie dream girl” who isn’t seen as human until a close brush with death. Wrote Dennis Parsons in 2005: “She is constructed for consumption, and viewed through the eyes of the male gaze.”

Crowe says that was never his intention. “I don’t think she’s like a cipher, I never did,” he said. “She was never a manic pixie dream girl to me. She’s based on a real person who is definitely not a manic pixie dream girl, in the best way. I always thought she was just a soulful, selfless, loving person who was super into community and kept herself a little bit hidden. She lit up a room by knowing everything about everybody.”

While the film strongly hints that Penny is underage, despite being sexually involved with Russell, Penny’s age — or that of any of the “band aids” — is never explicitly stated. “I just figured, let’s not invite the wrong kind of debate,” said Crowe of the musical. “Penny in the day was an adult to me — they all felt like adults, even though they were adolescents — and I never really felt there was some kind of predatory experience going on.

“Maybe that’s because I was 15 and 16, and people just knew that I had some rose-colored glasses on because I just loved music,” he continued. “But if you had that sense about the movie, which was made 20 years ago about a time 20 years before that, I feel like we’re opening the blinds a little bit, letting in more sunlight and seeing who she is.” 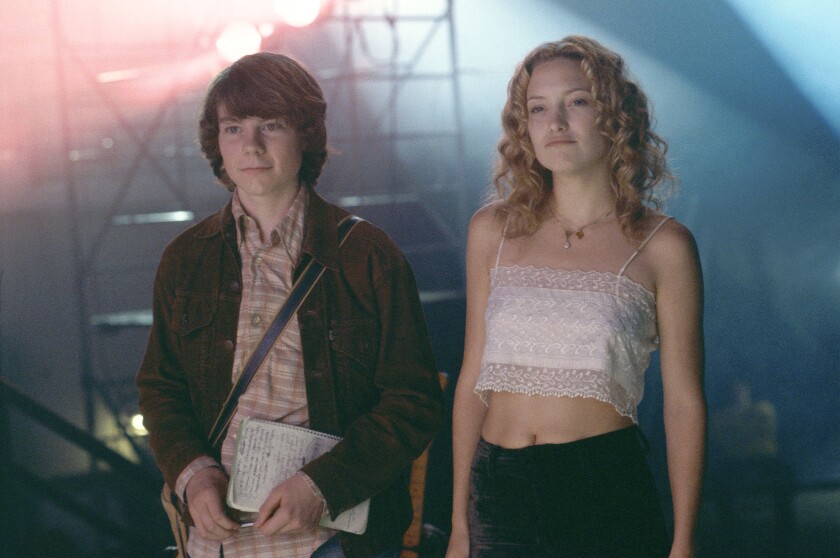 Pfeiffer was aware of the existing discourse around the character before choosing to play a new version of her onstage. “My biggest fear was that I’d be playing more of a vibe or an idea of a woman, or a copy-and-paste version of a cool girl,” she said.

“There are issues with the way women are portrayed and viewed in the movie, but that’s what was happening at the time. Is it accurate, yes. Is it problematic, yes! Let’s talk about it,” she continued. “Cameron has been more than willing and enthusiastic to shape these scripts to fit the actors now doing it, and with complete and utter respect toward women.”

Pfeiffer — who is of mixed race and excited to play the character “as someone more people can see themselves in” — spoke with Crowe about the real-life Penny, and learned more about these next-generation groupies who supported rock musicians on the road.

“There were more people involved than just these long-haired men, as amazing as they were,” she said. “These women were always present, but they never really get the credit or the chance to be seen as part of the revolution. They were the inspirations, they were ironing the shirts, they were fully part of it even if they weren’t on the posters.”

The film’s non-consensual kiss, planted by William on an unconscious, overdosed Penny, is left out of the musical. And the unsettling stomach-pumping sequence that follows is no longer set to Stevie Wonder’s whimsical hit “My Cherie Amour.”

“We tried that, but it didn’t work onstage, when it’s so visceral and heartbreaking,” said Tom Kitt, the Pulitzer-winning composer of “Next to Normal” who wrote the new music for “Almost Famous” and is heading up orchestrations. That moment now has a well-known, melancholy song that, according to Kitt, “gives it the stillness and gravity and all the angst and frustration and fear that William feels in that moment.” 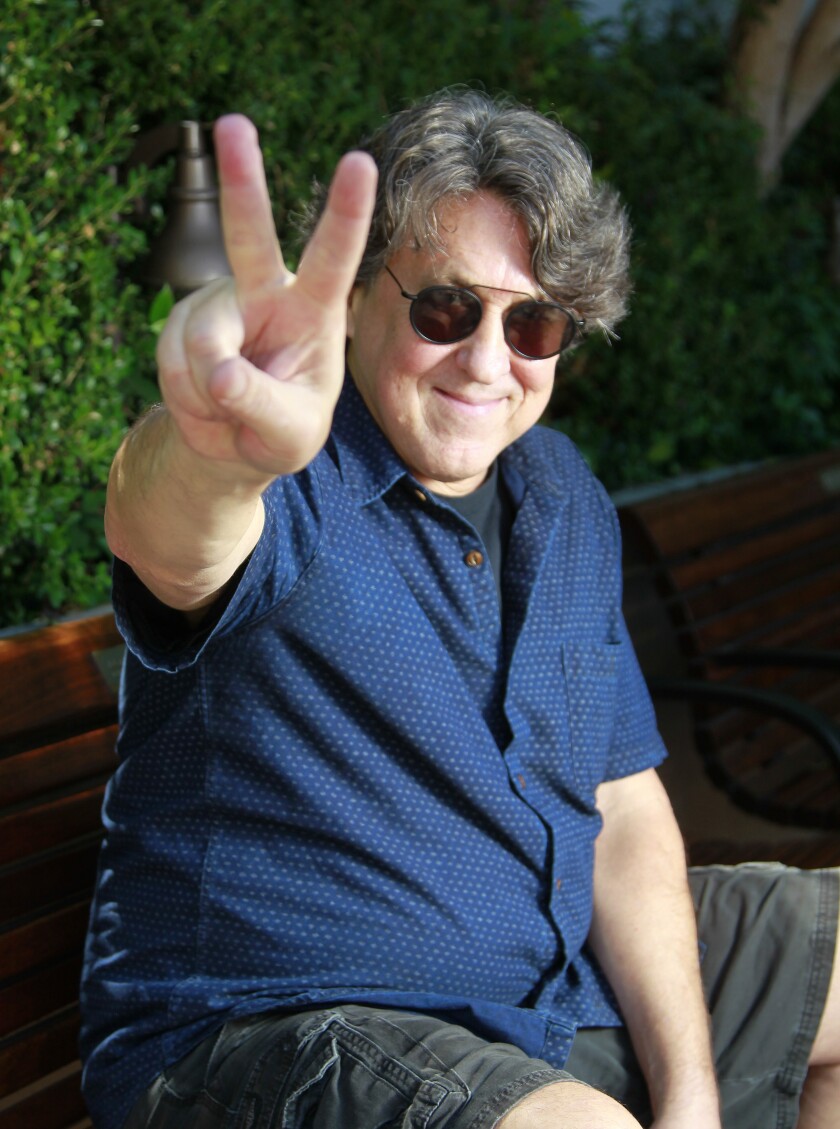 “Lester was always talking to me throughout the entire day,” Cameron Crowe said of critic Lester Bangs.

Throughout the musical come welcome interjections by Lester Bangs, the late rock critic and magazine editor who was a mentor to Crowe. Rob Colletti portrays the San Diego legend onstage, facing the audience to share honest and unmerciful proverbs once said by Philip Seymour Hoffman onscreen and by Bangs himself, either in published writings or to Crowe privately.

“Lester is the voice of reason and the conscience of William, almost like a Greek chorus reacting to the story and sharing bits of advice,” Colletti said. “There are moments when William is lost, and those are times you can’t see Lester. It’s its own version of the show to watch Lester specifically.”

Music fans can get to know Colletti’s Lester by arriving early to a performance and speaking with him directly. Before showtime, the actor can be found strolling through the aisles of the audience, answering questions about rock music — of course, only of a certain period. The real-life Bangs died in 1982.

“I love the idea that you could go to him and say, like, ‘Lester, what do you think of Beyonce?’” teased Crowe. “He’ll be confused but then say something like, ‘Have you heard the new Lou Reed album?’”

Crowe laughed, thinking of his formative friend. “Lester was always talking to me throughout the entire day, so I wanted to give him more of a presence in the show,” he said. “This is the folly of a rock journalist. I had to do it!”