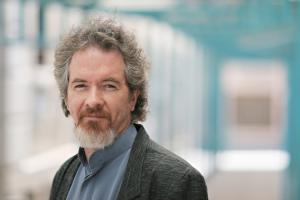 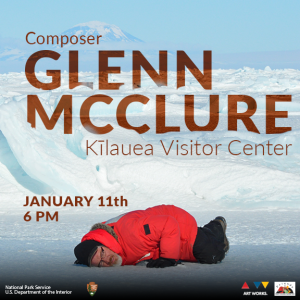 Central to his compositional process, McClure embeds scientific data into his music through sonification.”

HAWAII VOLCANOES NATIONAL PARK, HAWAI’I, US, December 21, 2018 — Hawaiʻi Volcanoes National Park and The National Parks Arts Foundation are proud to announce that Glenn McClure, composer, educator, and data scientist, will be the Winter-Spring Artist in Residence. The park has reopened, after increased volcanic and seismic activity forced closure of the Kilauea section for safety.

McClure will be doing a free to the public presentation about his compositions, art practice, and his travels and adventures on January 11th, at 6 PM, at the Park’s Kīlauea Visitors Center.

Originally from upstate New York, Glenn grew up in a rural area that had a wide variety of musical confluences running thought it. “I heard gospel, merengue, and salsa at the migrant camps when I accompanied my parents. I learned to sing harmony with the elderly ladies in the Presbyterian Church choir and psalms with the monks at the Trappist Monastery. My small, rural, k-12 school was blessed with brilliant music teachers that prepared me for college music programs and eventually becoming a professional composer.” After studying as a child at the Eastman School of Music in Rochester, McClure has gone all over the world performing his music, even to Antarctica. But his approach is always sensitive to the communal aspects of music. Says Glenn: “The most important thing my home town showed me, was that music happens in context. It happens in the middle of a place, with specific people who carry history and identity that molds and shapes their music. It was never about competition. It was about music with a sense of place and purpose.”

During the residency, McClure will be sharing his creative process through blogs, videos, and more at www.artforbrains.com. He will also produce a presentation about his work and travel adventures all over the world, for visitors and the public at large. This event is made possible with support from the National Park Service, the National Endowment for the Arts, and the Friends of Hawai’i National Park. THIS EVENT AS WITH ALL THE NPAF AIR PROGRAMMING is free and open to the public. For more information please call the park at (808) 985-6000.

McClure will spend thirty days working closely with park rangers, scientists and indigenous musicians to create new music that tells the story of the science and history of their volcanoes. Central to his compositional process, McClure embeds scientific data into his music through sonification. This involves the mathematical translation of numerical data sets into melodies, harmonies and rhythms. Glenn has used this technique in all sorts of far-flung locations to make music that literally embodies a harmonic spirit of place. “Later, after working with choir based at the European Space Agency Operations Center in Darmstadt, Germany, I composed a piece with the flight dynamics team of the Rosetta Mission. We sonified orbital data from the day that the spacecraft encountered the comet after 9 years of flight. My work with the National Science Foundation in Antarctica returned me to my roots in musical activism for the environment and now, that continues with the Hawaii residency.” In addition to the final musical compositions and a lecture/concert at the park, the public will be able to follow his research, hiking, and artistic process through a blog found at www.artforbrains.com starting in late December.

The music generated in this residency builds upon a larger body of McClure’s work with the European Space Agency, the National Science Foundation’s Antarctic program, and other music/science collaborations. It also adds a new chapter his life-long advocacy for the environment that has included musical compositions, K12 arts programs, multiple concerts with folksinger, Pete Seeger.

Once in residence in Hawai’i Volcanoes, Glenn will use a wide-ranging, open approach seeking to synthesize musical sources from all corners of the Big Island. Says McClure: “I will work with volcanologists, analyzing current data that describes the volcanos and listening to the music that emerges from the sonification process.” But data sonification is just the beginning of his explorations, adds Glenn: “Similarly, hiking through the park (and other locations on the Big Island) and improvisation with local musicians will generate impressions and sounds that I cannot predict. I look forward to hearing the voices of the Big Island through the volcanoes, the scientists, and the musicians.”

Glenn McClure is a composer and scholar. He currently teaches Music and Humanities at Paul Smiths College in the Adirondack Mountains of New York State. He has also served on the faculties of SUNY Geneseo and the Eastman School of Music/University of Rochester. His music has enjoyed international acclaim in Germany, Italy, Mexico, Nicaragua, Japan, Korea, Thailand, and beyond. In the US, McClure music has been featured at multiple concerts at Carnegie Hall, Lincoln Center, and Orchestra Hall. National broadcasts of his music and artistic process include National Public Radio’s All Things Considered and the CBS Christmas Special. As a scholar and educator, McClure received the Chancellors Award with is the highest award given to adjunct lecturers by the State University of New York.

NPAF is a 501(c)3 non-profit dedicated to the promotion of the National Parks of the U.S. through creating dynamic opportunities for artworks that are based in our natural and historic heritage. This project is supported by the National Endowment for the Arts, Friends of Hawaiʻi Volcanoes National Park, and other generous benefactors. All NPAF programs are made possible through the philanthropic support of donors of all sorts ranging from corporate sponsors, small business, and art patrons and citizen-lovers of the Parks. NPAF is always seeking new partners and donors for its wide-ranging artist-in-residence programs.