“Central Park” is as ambitious as the 840-acre park it portrays. Each episode of the animated series includes a whopping four original musical numbers, all of which will become available to stream on Apple Music as the series progresses.

“We told ourselves that if we were going to make this show, the songs have to be as diverse and dynamic as the real place in New York City,” said Josh Gad, who created the show with “Bob’s Burgers” vets Loren Bouchard and Norah Smith. “You can’t depend on just one or two songwriters to accomplish that massive workload without it quickly sounding redundant.”

Gad set out to “assemble ‘The Avengers of musical theater’” — including Sara Bareilles, Fiona Apple and Cyndi Lauper — to write songs with clever punchlines, catchy hooks and thoughtful commentary on real-world matters. The Times got the story behind the standout show tunes in the initial trio of episodes, now available on Apple TV+:

Episode 1: “Central in My Heart”

Gad, who voices the show’s troubadour narrator, leads a spectacular opening number that introduces the park’s many people and pastimes, and its role as the city’s defining public space. Kate Anderson and Elyssa Samsel, who also wrote Gad’s songs in the Disney short “Olaf’s Frozen Adventure,” penned the love letter to the park they both previously frequented (Samsel busked as a violinist, and Anderson fundraised for Shakespeare in the Park).

Thankfully, animation allows for the kickoff to showcase the park’s variety and versatility. “In theater, you only get so many actors and so many costumes, so writers are usually limited in what we can do,” said Samsel of the song, initially drafted three years ago. “It was so fun to be able to dream something up and then see what the animators came up with.”

In addition to spotlighting the park’s various areas and amenities, the songwriters wanted to briefly address its “dark chapter” — the destruction of the predominantly African American community Seneca Village. “We wanted to touch on that without brushing over it in a joke, because their land was taken to make the park, in a way where they didn’t have a choice,” said Anderson, who is also developing a live-action musical movie about this historical event with Samsel and Gad.
Episode 2: “Make ‘Em Pay”

Stanley Tucci voices the series’ primary rival: Bitsy Brandenham, an elderly hotelier trying to turn the park into a business district. During a frustrating meeting with fellow investors, she enters a musical dream sequence in which she shares her backstory and vengeful motivations.

“Like so many bullies, she feels like a victim herself and wants to act out her woundedness on the rest of the world,” said Brent Knopf, who wrote the song. “Even though she’s filthy rich, she still feels like she’s getting the short end of the stick, and she wants everyone to pay for how they hadn’t appreciated her when they should. We wanted to outline where that comes from to make the story more complex, because it’s not very much fun to have a character that’s completely evil.”

Knopf drafted 40 pages of lyrics for the 90-second song, and is surprised that his lines about sexism — “I’m constantly ignored, and no one sees my genius / I’d like to be adored, must I grow a penis? Seriously” — made the cut for the family-friendly show. Tucci is unrecognizable in the tune, as he masterfully warps his voice into a scratchy, zig-zagging cantor. Said Knopf of Tucci’s recording session, “We just did a few takes and it was clear we had what we needed. It was hard to dampen my laughter while listening.”
Episode 3: “The Park Is Mine” 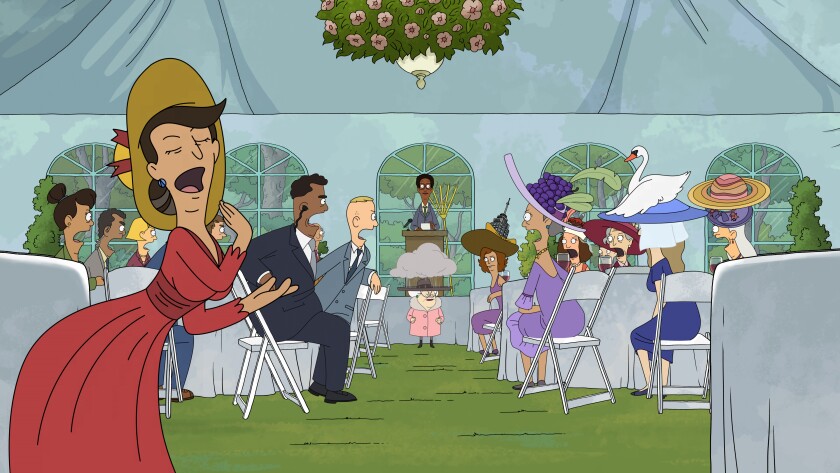 Rafael Casal and Utkarsh Ambudkar wrote “The Park Is Mine.”

The hip-hop song covers an uppity luncheon where retired philanthropists trade scathing insults with self-serving politicians. Many of the lyrics are inspired by the uninhibited conversations that Rafael Casal heard while working at Lake Merritt in Oakland as a teen. “These old ladies were so entitled and angry and didn’t care what they said in front of me,” he recalled. “In my mind, this was like if they got into a fight with a more mundane ‘Sopranos,’ this bureaucratic mafia.”

The track, written with Utkarsh Ambudkar, includes a “snappy ‘West Side Story’-like refrain” and “lots of falsettos, because they’re just inherently funny because they sound so earnest,” said Casal with a laugh. Left out of the song are “all these really inappropriate jokes, which is fair. You don’t know where the line is until you test it, right?”

The song serendipitously musicalizes the “false sense of ownership” of public spaces, as Amy Cooper infamously demonstrated last week. “It’s amazing how some people feel such entitlement to something that doesn’t actually belong to them, and then those spaces then get politicized,” said Casal of the incident. “It’s like in the song, when these groups are both calling the other ‘colonizers,’ when neither of them own the space! That’s what I love about comedy: you can slip in something authentic and important and nobody notices because it’s also funny,” he added. “We’re entertaining you, yes, but we’re also saying something very, very real.”