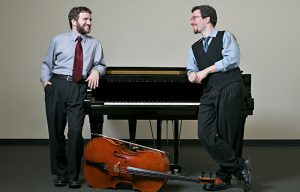 Playing cello and piano, The Rice Brothers will perform a blend of classical music, Gospel, jazz, ragtime and Boogie Woogie at 7 p.m. on Saturday, Oct. 5 at the Rock Springs High School Theater. Tickets are available at the Community Fine Arts Center.

Rock Springs, Wyoming — The first performance of the Community Fine Arts Center’s season is The Rice Brothers in concert at the Rock Springs High School Theater at 7 p.m. on Saturday, Oct. 5.

Tickets are available at the CFAC and at the performance.

“Not your normal formal classical musicians, Johnny and Chris Rice walk onto the stage casual and friendly,” said Debora Soule, CFAC director. “But don’t let that fool you, they are award-winning, outstanding artists whose music will draw the audience in and reach into your soul.”

Both brothers started their life of music at very young ages. The story from their biography explains how it happened.

“When did their parents, neither of whom claims to have a whit of musical skill, first realize that Johnny and Chris had a love for music? It was during a trip from their hometown of Phoenix, Arizona, to Disneyland that 3-year-old Johnny was mesmerized by a pianist who was playing Ragtime and Boogie Woogie on Main Street. When asked by his Dad if he wanted to learn to play the piano, Johnny responded with a heartfelt “YES!”

“Lessons started at age four and soon it was apparent that this young boy had a real gift for music. Little brother Chris, not wanting to be left out, started piano lessons at the age of two! Before long, they both began learning cello. Soon, the young Rice brothers were being invited to play music at family gatherings, church events, schools and retirement communities. They loved learning the music of the masters—Beethoven, Bach, Liszt— and because of their pride in their Polish heritage, especially Chopin. But that Ragtime from the hands of their very first mentor, Disneyland’s Johnny Hodges, stuck with them. Because of that early encounter, The Rice Brothers have always loved sharing the full spectrum of great music with their audiences, knowing its power to communicate with and transform a listener.”

Years of training from world-class teachers have provided both brothers the skills that have made them the consummate artists they are today. On piano they were both accepted into the studio of internationally renowned pianist and Arizona State University Professor Robert Hamilton. Studies with Johannes Kropfitsch, director of Piano at the Vienna Conservatory, contributed to their deep exploration into the nuances that allow the highest levels of musicality to blossom.

On cello they received more than a decade of rigorous training from Taki Atsumi, long-time president of the American Cello Congress and professor at Arizona State University. The Rice Brothers also received coaching from international icons such as Mstislav Rostropovich (who said to their father, “You need to understand … your sons are massively talented!”) and Eugene Friesen, Grammy Award-winning jazz cellist.

Full of energy and commitment, armed with the finest training imaginable, and winners each of gold medals in an international Chopin competition, The Rice Brothers emerged onto the world stage as inspiring artists.

They were invited to perform their debut concert in New York City’s Carnegie Hall, where their performance thrilled the audience and elicited multiple standing ovations. They have been enthusiastically received by audiences of all ages and walks of life in venues throughout America and in Europe. They have offered their music in large performing arts centers and churches, as well as in house concerts and in classrooms settings.

With all of their success The Rice Brothers, Johnny and Chris, are “still the same sweet and friendly guys from Phoenix, devoted to sharing the beauty of music, knowing that great music, regardless of the genre, has a unique way of reaching deeply into the human heart.”

For more information, contact the Community Fine Arts Center. Hours are Monday through Thursday 10 a.m. to 6 p.m. and Friday and Saturday noon to 5 p.m.