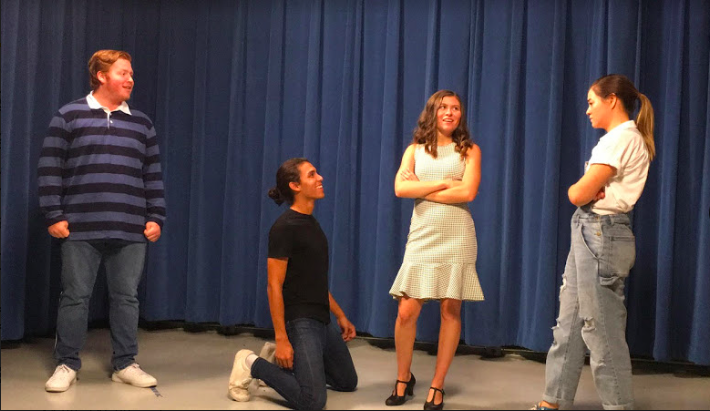 “The warden threw a party at the county jail.” These are the first words said in St. John’s Chappell Players fall musical, “All Shook Up.”  Kicking off with “Jailhouse Rock,” by Elvis Presely, immediately sets the mood for a fun, familiar and exciting show. This show is one not to miss.

“All Shook Up” follows the journey of a young roustabout who brings romance and rock’n’roll to a lifeless town in the middle of nowhere through timeless music inspired by Presley. The cast is very excited about the selection of this production. “It’s truly funny, vibrant and captivating – and has great music from Elvis, but with a different spin,” said Parker Young, a senior TV and film major and president of Chappell Players. He also says that “Everyone performing has built so much comradery and is truly enjoying themselves, so that will translate to the audience and allow them to enjoy themselves too.”

“It’s such a creative show that everyone will be able to jam to. There are so many hits, so it will connect with everyone, young and old. I will go on to say that every seat will be filled… I think this show is killer,” Angelica Cieslak, a junior Communications major and vice president of Chappell Players said.

To pull off a show with acting, dancing and singing (especially to songs that the audience may know very well) takes a lot of hard work and long nights. The cast agreed that this is by far the largest and most ambitious production that they have done as members of Chappell Players. Putting on a production of this scale in just over a month is impressive. “In high school, it would take six months for our productions. Now, we’re doing it in one month, and the performances are high-quality,” Maura Consedine, a freshman, commented.

(From left to right) Jacob LaChapelle, Ryan Michel, Fiona Castro and Kristin Camacho rehearsing a scene in this semester’s musical.

“It’s a big production with high energy. There is so much singing and choreography that we’ve been practicing from 6:30pm to at least 10:30pm, six days a week,” Sheila Kiernan, a sophomore and the Public Relations Officer for Chappell Players, added. However, being around what Kiernan calls her second family makes even the longest of nights fun. Chappell Players allows Kiernan to be a part of a supportive community, connect with others who have a love for theatre, and grow as a person by putting herself out there.

Ryan Michel, a senior cast member, explained that since there is no theatre major at St. John’s, the people that participate in Chappell Players are people that truly want to be here and put on a show with one another. “It’s not a forced class assignment or project for a major. Everyone in this group is here voluntarily because they love putting on these productions, and they’ve formed such a close bond through doing so,” Michel said. “It’s the people that make it worth it…we’re a real family,” Kristin Camacho, a sophomore and treasurer of Chappell Players, shared with the Torch.

The family-like bond that the members share with one another is so real and apparent. There is always laughter and warmth in the air, even when they are learning a lot of technical choreography. Seeing people standing on chairs during their rehearsal, joyfully singing to the catchy and classic songs was very entertaining. There are quite a few memorable numbers that will leave people wanting to sing and dance along. Be sure to attend this must-see production! You can catch “All Shook Up” on October 11, 12, 17 and 19 at 8:00pm, October 12 and 13 at 2:00pm, and October 18 at 10:00pm in the Little Theatre.