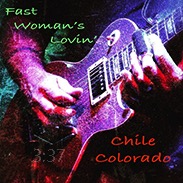 LOS ANGELES, CALIFORNIA, UNITED STATES, December 18, 2017 — The latest offering from the Chile Colorado band lead guitarist “Fast Woman’s Lovin” has recently been gathering pace online and FM radio stations. The new single releases have started to see the grow in popularity amongst platforms such as Youtube and Soundcloud.

Although the band is primarily classed as hard rock, “Fast Woman’s Lovin” is sure to attract any fan of blues, but also has the ability to introduce anyone new into the genre; giving a great rocky/blues feel. The band do a great job in creating this catchy blues number.

The song sets the mood for a classic late night bar scene, painting the perfect picture of a smoke filled room, dim lights and plenty of alcohol.

“Fast Woman’s Lovin” holds smooth vocals, cool bass licks, prominent organ, and amazing guitar solos. Sounds similar to Jimi Hendrix can sometimes be heard, especially with its impressive fast guitar shredding. However, even with these great attributes, the song still manages to give a chilled out vibe.

The band’s debut album Getting Restless has also seen success at Rock Radio. It was a headline on the Newswire Jumbotron in Times Square, Manhattan, New York. This was directly across from the Hard Rock Cafe.

The song enters with lyrics:

A fast woman’s lovin is hardened and hot

Well a fast loving woman is all she got

As an onlooker, one feels the song and lyrics might be saying that certain “fast women”, may interest men at the time, but once they have experienced them, they quickly fade away.

The band’s founder Ron Wright is currently recording new songs in Studio B Monterey, CA and just previously released “All Your Bull ” a politically motivated song. He will be producing and releasing singles for the next few months and then plans on touring. [email protected] https://www.chilecolorado.com/