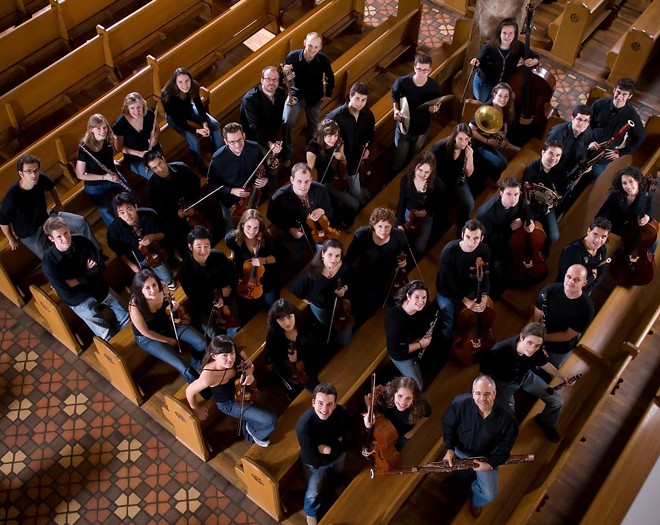 Northeast Ohio’s two itinerant orchestras are both performing around the region beginning on Thursday this week.

Apollo’s Fire is touring “Echoes of Venice,” polychoral compositions by Gabrieli and Monteverdi which raised the temperature of music in the “Most Serene Republic” around the turn of the 17th century and launched a whole new, opulent style. Boston’s early brass ensemble, the Dark Horse Consort, joins Jeannette Sorrell, Apollo’s Singers, and vocal soloists Amanda Powell, Raha Mirzadegan, and Jacob Perry in works by Venetian composers, as well as Germans who journeyed south and brought the splendor of Venice back home. Performances run through Sunday in four venues. Check our Concert Listings for details, and reserve tickets online.

CityMusic Cleveland begins its season with new music director Amit Peled and four concerts around the region titled “Between Two Giants.” The free programs include Mozart’s Symphony No. 35, Bruch’s Kol Nidrei, Jessie Montgomery’s Strum, and Haydn’s Symphony No. 104. Check our Concert Listings for details of the performances, which run through Sunday. The concerts are free.

With New York Philharmonic conductor Jaap van Zweden having cancelled due to a family medical problem, The Cleveland Orchestra’s concerts this week will be led by Klaus Mäkelä. On Thursday, October 17 at 7:30 pm, and Friday and Saturday, October 18 and 19 at 8:00 pm, violinist Augustin Hadelich will be featured in Prokofiev’s Violin Concerto No. 2. The Orchestra will launch the programs with Messiaen’s Les Offrande oubliées and conclude with Beethoven’s Symphony No. 7. Tickets can be reserved online through the Severance Hall box office.

Cleveland’s new music ensemble No Exit will present an evening of electronic music at Appletree Books on Friday, October 18 at 7:00 pm. The playlist includes Luciano Berio’s Thema (Omaggio a Joyce), James Praznik’s Exo-Narrative 1: Thanks for the Memories, Timothy Beyer’s Descent, and an untitled work by Greg D’Alessio. It’s free.

Ars Organi, a festival of organ music at St. Paul’s, Cleveland Heights, ends its run with performances by Erik Wm. Suter (Washington, D.C.) on Friday, October 18 at 7:30 pm, Steven Plank (St. Paul’s and Oberlin) on Saturday, October 19 at 4:00 pm, and Karel Paukert (St. Paul’s) with narrator John Orlock on Sunday, October 20 at 4:00 pm. Repertoire ranges from French romantic to 17th-century music and on Sunday features Petr Eben’s The Labyrinth of the World and The Paradise of the Heart (after a literary work by Jan Amos Komenský-Comenius). A freewill offering will be received.

And next up on the Cleveland Chamber Music Society series is The Jerusalem Quartet, who will play Mozart’s Quartet in d, K. 421, Korngold’s Quartet No. 2 in E-flat, and Shostakovich’s Quartet No. 9 in E-flat at Plymouth Church on Tuesday, October 22 at 7:30 pm. Tickets are available online.

For details of these and other classical concerts, see our Concert Listings page.