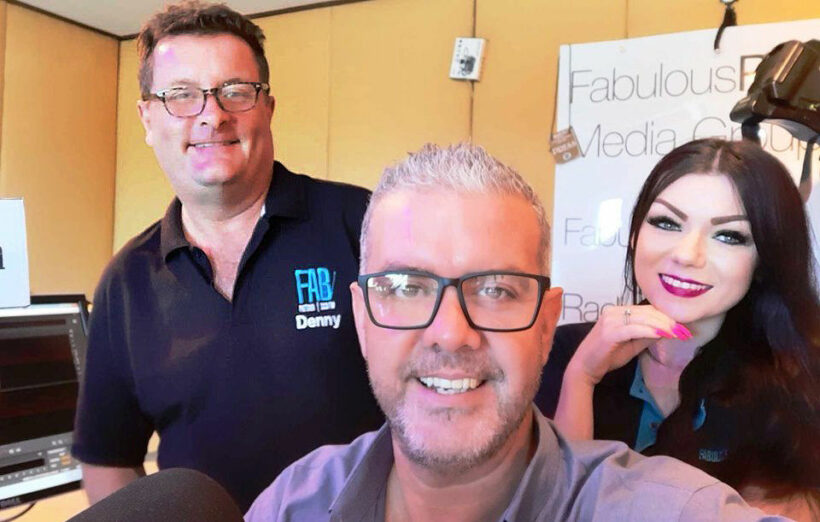 Phuket’s airwaves get a much-need make-over on Monday when a new radio station launches. The new station, Fabulous Phuket 102.75 FM takes over the old frequency from The Thaiger that operated on 102.75 FM for nearly three years before it started focussing all their attention on thethaiger.com instead.

We met with the new owner/operator of Fabulous Phuket, Tommy Dee, to find out what listeners can look forward to the Fabulous Phuket hits the airwaves from next Monday, September 2. Tommy’s other station, Fabulous 103 FM in Pattaya is acknowledged as one of the best ‘farang’ stations in the country, all due to Tommy’s persistence and professionalism.

How will Fabulous Phuket be different from the current stations available?

“When ‘Fab’ first launched we had a goal to have quality shows day and night, not just the easy ‘music…jingle’ approach run by a computer, but a fun station with experienced on-air presenters. Our daytime squad will be on duty from 6am with the BBC news content until 8am when our live shows kick off with ‘Brooksy’ on the morning show. “The Mighty” Peter Quinn is on from noon to 3pm, then “Drive Time Dave” until 6pm. After that we share shows with our sister Pattaya station through to Midnight.

“So you have someone in the studio keeping you company most of the day. We’re in your car and travelling around Phuket with you.”

“These three guys are pros, theres no pre recorded generic voice recordings like “that was a great song and this is another one”. These guys are truly “on it and in it” throughout their shows, choosing their own music and style. To me, anything else is just a Juke Box and we aren’t one of those.

“We will also have local Phuket news and hourly updates from the BBC.”

Tell us a quick history of Fabulous Pattaya 103 FM.

“Fabulous 103 in Pattaya is about 10 yrs old now, and started as a hobby. I had been involved with another station but moved on to pursue our own station. Eventually Fabulous 103 started as a one man band in what we called ‘the tin shack’.  When it rained we put cups on the mixers to catch the rain from the leaky roof.

“We struggled a bit in the early days and I even sold a house to keep the business afloat.  Wise or unwise, I invested a lot in state of the art radio radio equipment to build the best radio station facility in Thailand. We were also lucky to recruit excellent radio presenters to support Fabulous.

“Most are still with us after all these years. We became Pattaya’s Number One radio station after starting with our leaky shack just five years before, and now we’re bring our expertise and team to Phuket.

What is the ’sound’ of Fabulous Phuket

“Fabulous Phuket is a station designed and scheduled to keep listeners in touch with new music while enjoying the  classics too.  It’s lots of things, it’s fresh, it’s Fabulous and always genuinely FUN. We built the Fabulous brand to share the fun you can have with radio.”

“Without doubt, yes. That’s how we hooked up with the likes of Brooksy, Megan and Denny. They contacted me, we met and it was obvious they would be amazing.  We get emails weekly now from people “wanting to be on the radio”. But whoever is on ‘Fab’ has to be good enough for listeners to enjoy. Send us a file and we’ll get back to you.”