Lovatics rejoice! Demi Lovato told her fans that they won’t have to wait long for new music in an Instagram post on Wednesday, November 13.


Demi Lovato Through the Years

“Wouldn’t y’all like to hear … ” the songstress, 27, captioned a muted video of Grammy-nominated record producer Warren “Oak” Felder listening to a new song in the studio on her Instagram Story.

She followed up the clip with a photo of a microphone in the recording booth. “Recording a song for my loyal #Lovatics. The ones who support me and whatever makes me happy… If you hating – that ain’t you, BYE,” Lovato wrote along with a waving hand emoji.

Lovato and Felder, 39, collaborated in the past on the songs “Sorry Not Sorry,” ” Sexy Dirty Love,” “Daddy Issues,” “Only Forever” and “Games” from her 2017 album, Tell Me You Love Me.

This will be the first time she has released new music since the pop star was hospitalized for two weeks following a nearly fatal overdose in July 2018. After the incident, Lovato completed a 90-day stint in rehab for substance abuse in November 2018. The former Disney Channel star released her last single, “Sober,” which detailed her relapse after more than six years of sobriety, in June 2018.


Celebrities Who Have Been to Rehab 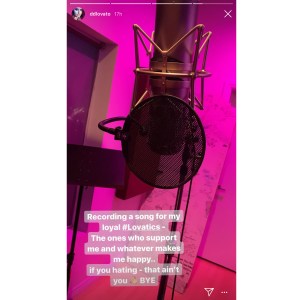 The pop star has been open about her struggles with drug addiction, eating disorders and bipolar disorder in the past. Lovato explained at the Teen Vogue Summit in Los Angeles on November 2 that she’s now looking forward to a brighter tomorrow.

“What I see in the mirror [is] someone that’s overcome a lot. I’ve been through a lot and I genuinely see a fighter,” she said at the time. “I don’t see a championship winner, but I see a fighter and someone who is going to continue to fight no matter what is thrown their way … a strong woman.”

Lovato is stepping into that future with a new man by her side. She and her boyfriend, Austin Wilson, went Instagram official on Wednesday. A source told Us Weekly that the couple clicked because they have similar values.


Celebrity Couples and How They First Met

“Demi’s friends approve of Austin and they’re both great influences on each other,” the insider told Us on Wednesday. “Austin and Demi are both sober and it’s easy for them to connect and understand each other.”

Before she began dating Wilson, 25, Lovato had a short-lived fling with Bachelorette alum Mike Johnson but the pair parted ways in October.