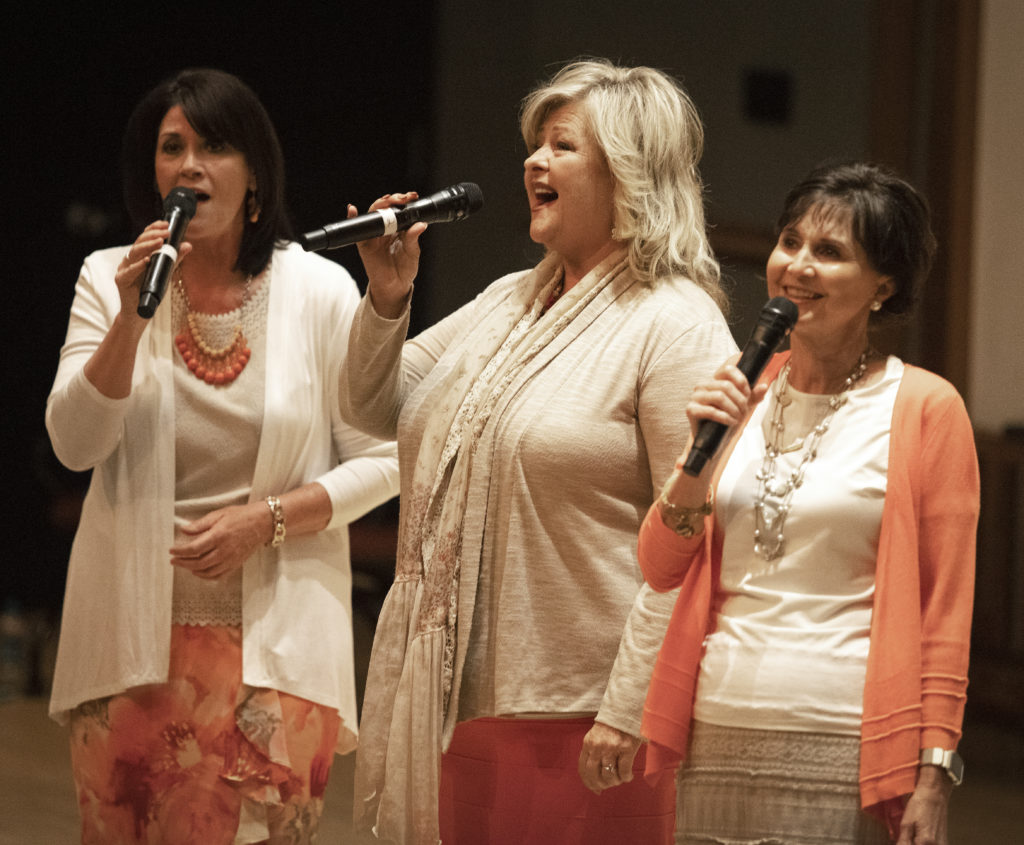 From left: Lori Hales, Me’Chel Musgrave and Debbi Bastian of the musical trio “Heartbound,” shared their thoughts about seeing God’s hand in one’s life through music and word. (Addie Blacker)

The group started singing together in the 1980’s and have been inspiring others through music ever since.

“We hope and pray that today you will be able to come with eyes to see the great and marvelous work we have the privilege of being a part of,” Bastian said, as the trio then began singing a song called, “A Marvelous Work.”

Bastian then shared one of Jesus Christ’s miracles in Matthew 17:27, when the people came to collect tribute money and Christ asked Peter to collect the money by going to the Sea of Galilee and casting his hook. Despite Peter’s probable doubts, he obeyed the Lord, and the first fish he caught had a gold coin in its mouth.

“God orchestrates miracles in our lives; He is — by design — in the details of our lives,” Bastian said. “When have we caught the fish with the coin?”

Bastian shared an acronym with the audience for the word “SMILE:” See Miracles In Life Everyday.

The trio then sang a song written by Bastian and her husband entitled, “Stand As A Warrior Today.” The instrumental music they sang along with included male voices singing “We’ll Bring The World His Truth,” who Hales later identified as their missionary sons.

“Music best expresses our testimonies and our love for God,” Hales said. “When I see God’s hand in my life I also see music. Music has totally and completely blessed my life.”

“I thank God for His divine signatures, for those times when He allows us to see His hand in our lives,” she said. “I don’t know how He does it. But oh how thankful I am that he does.”

They then sang the well-known Christian song, “I Can Only Imagine,” and invited the audience to sing along with them.

Noting the recent 50th anniversary of the man on the moon, Musgrave compared the challenging path of an astronaut traveling to space to one’s life on earth — both have the ultimate goal of returning home safely.

“We have all experienced turbulence in our life at times, when we wonder if we can continue on,” she said. At times, even NASA has failed, and so will we, she said.

Though everyone’s mission may not be to walk on the moon, Musgrave suggested to the audience they have an even greater mission. “We will live eternally forever and ever as we have eyes to see His hand in our lives.”

She quoted the famous words of Neil Armstrong, “One small step for man, one giant leap for mankind.” She then asked the audience what their last words will be and what will they leave behind — for their posterity, and for mankind.

The trio finished their performance by singing an emotionally-stirring arrangement of “How Great Thou Art” and “I Need Thee Every Hour” as pictures of Jesus Christ showed on the screen, then concluded by sharing their testimonies.