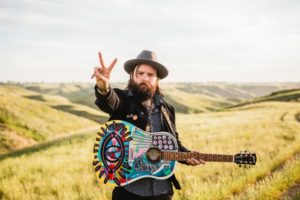 Former Victorian Leeroy Stagger has a long and rich history here in the capital. Now, Stagger is returning to town on the back of his 11th studio album, Strange Path. Stagger says that he tries to visit Victoria as often as possible.

“I spent lots of time there over the summer, but I’m really excited to come back to play at the Capital Ballroom,” says Stagger. “I’d say it’s the premier venue in Victoria. It’s really my first headlining show at home since Rifflandia a few years ago. I’m really excited.”

Stagger says that he feels like Strange Path is a much younger sound. He remains true to his roots on it while experimenting far more in the studio than on previous recordings.

“I don’t know how I’d describe the new album,” he says. “The description is kind of in the songs. It’s up to the listener to interpret it. I’d say that, like most of my records, it’s very diverse. But I’d also say that it’s my most contemporary record. Everything about it feels complete. As a musician that’s a really good feeling.”

Former Victoria resident Leeroy Stagger is learning to juggle being a musician, parent, DJ, and more (photo by David Guenther).

Diversity has always been Stagger’s calling card. He’s found success playing punk, rock, folk, and country, which he says reflects his tastes as a listener.

“I like to listen to everything, and it changes all the time. The past couple of days I’ve been on an old-school funk kick,” he says. “I’ll go through phases where I’ll listen to nothing but Warren Zevon, or Springsteen. I’m drawn to music that speaks the truth of the times. Music that’s politically driven. I like artists who aren’t afraid to step outside the box, but not too far. I like a recognizable melody that’s catchy, or palatable, I suppose.”

Stagger’s eclectic ear has landed him a DJ spot at CKUA, which airs across Alberta and streams worldwide. Stagger says that it’s the biggest radio station in the province for a reason.

“One thing that we [CKUA DJs] love is that we’re not told what to play,” says Stagger, whose show is called Dirty Windshields Radio Hour. “There are so many great songs that just don’t get airplay anymore, and B-sides that are just killer stuff that commercial radio just won’t play, for whatever reason.”

It’s not just DJing and playing music: the work never ends, says Stagger. He says he’s spending a lot of his time rehearsing for the upcoming tour, but that’s just one of the balls he’s juggling.

“When I’m home, I’m dropping off and picking up kids from school,” says Stagger. “I’m being a dad as much as possible. I’m right in the middle of this album tour, so I’m not producing any records right now. We are just so busy with the tour, and we are dealing with the promotion of the record on top of it.”

Stagger admits that it can be tough to keep up, but he has a great manager who takes really good care of him.

“This day and age, there just aren’t the numbers of staff that there used to be,” says Stagger. “I’m kind of the ringmaster, making sure that everyone is on top of everything. A lot of the time that’s just me writing posts on Facebook and newsletters to fans. I’m constantly creating content to give to fans. Some days it feels like I’m doing everything but writing songs.”

With so much happening at once, Stagger says that some days are easier than others.

“Sometimes you’ve just gotta breathe,” he says. “I meditate and practice mindfulness. Some days it’s pretty hard. There are days when I question doing this for a living. I just try to balance it all, and I let my kids know that I love them as often as possible.”