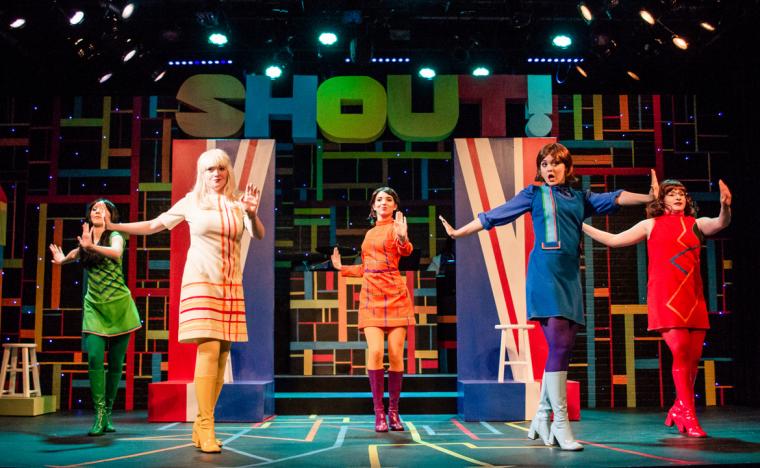 The Clinton Area Showboat Theatre’s Shout! The Mod Musical played to a full boat on Friday. The performances were exhilarating, and the winning score was comprised of 1960s hits. However, the script made that of Mamma Mia! seem Oscar Wildean. Well, you can’t have everything. And what you do have here is substantially entertaining.

Courtney Kattengell directed and choreographed, Laurie Lewis was music director, and with much singing and dancing here, they handled their daunting jobs wonderfully. With a production bursting with lively action, lighting designer Marly Wooster and sound designer/engineer Hayden Bearden had full plates, too, as did scenic designer Stephen P. House, whose backdrop is a forest of multicolored Mondrianesque stripes with niches for the musicians. I liked the brick patterns under the paint, and the occasional use of pinpointed lights studding the wall was effective. Conversely, the designs of the six narrow flats flanking the stage were busy, non-period, and overkill; with the profusion of colors already present, their patterns and hues were lost. (I did love the Union Jack pair, but would’ve included a black pair and a white pair for contrast.)

The show’s four Carnaby-Streetworthy birds and one Yank kick things off with a rainbow splash. In fact, only the colors they wear identify them, as they’re otherwise nameless. Costume designer Rebecca Ranking provides gorgeous minis and a panoply of ’60s wigs at the start, and really gets to spread her wings in Act II with her multiple wardrobe selections, and her fish-out-of-water elements for the sole American kept that character apart from the others.

I’d seen most of Shout!’s performers before in other Showboat productions this summer, so I knew they had rich, compelling voices and solid acting skills. These four young undergrads and a recent grad could no doubt take on almost any stage challenge (and thankfully, as these songs and dances were demanding and the script problematic).

The explosion of talent here makes it challenging to say anything I haven’t before. Lauren Medina (Orange) is engaging and confident as always, but also embraces vulnerable moments, as in her highlight “You Don’t Have to Say You Love Me.” Sydney Howard (Red) handles physical comedy as nimbly as everything else – but her earnest “To Sir with Love” blew me away. I hadn’t seen Allison Winkel (Green) before, but she is as marvelous as the rest. Winkel takes lead vocal on another hit from the big screen. (I won’t spoil it, and if you want a vastly entertaining surprise, don’t read the program in advance.)

The versatile Eden Mau (Blue), singing “You’re My World” paired with Orange’s “All I See Is You,” is a heartbreaker. Kathryn Aarons (Yellow), as “the American,” is (appropriately) not quite as swinging as the others at first. But then she rattles the timbers with her outstanding “Son of a Preacher Man” as the rest let loose with enthusiastic gospel backup. The full-cast numbers are sassy and fun. (Again, I’d advise skipping a perusal of the program and enjoying them as they come.)

These women overflow with so much talent that the little blips glared. Their British accents faded in and out (unlike in this company’s season opener A Gentleman’s Guide to Love & Murder). And while they clearly have extensive classical-voice training, I would’ve liked them to bring a looser pop style to the songs.

And oh, that script is one big blip. I was looking forward to enjoying Shout! like a smooth, frothy confection. But it was more like a yummy strawberry milkshake with some unexpected chewy bits that turn out to be raisins . . . I think. 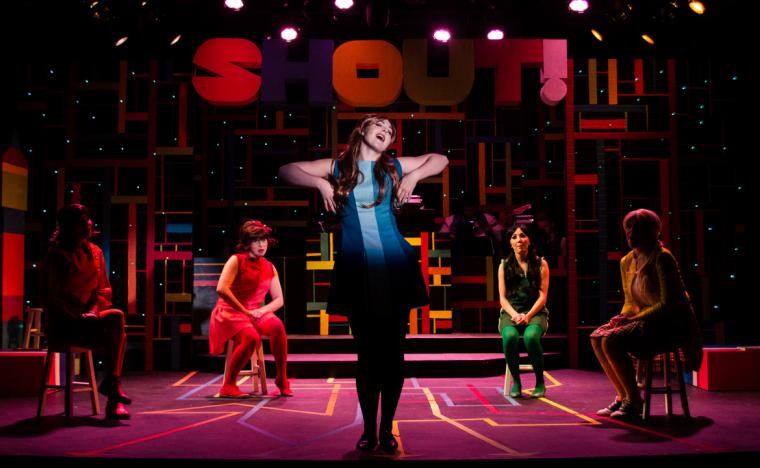 The framing device for the songs is an omnipresent magazine (its contents voiced by David Coolidge and Jami Witt) that harangues the quintet about the importance of beauty and marriage. It’s a good idea poorly executed as the comedy here is written both broad and shallow – and one bit of drama was so disturbing it jarred me right out of the show’s illusion. Thus, the plot is more a nuisance than a unifying force.

Getting the rights to more than 25 songs must have been expensive for the creators, and I assume that after dropping that wad, they had to settle for a discount book writer whose name wasn’t even in the program. Embarrassed, maybe? (I’d planned to refer to him as “Allen Smithee.”) But the Internet tells me that the “mod musings and groovy gab” (insert eye-roll) were by Peter Charles Morris and Phillip George (the latter, co-creater of the show alongside David Lowenstein). They have acting, directing, and choreography experience, but no prior writing credits. Not a shock. The dialogue includes Laugh-In-style quips that aren’t very funny. The use of British slang and sex references is forced and awkward. And I’m pretty sure “cosmic,” as slang, dates from the 1970s, not the ’60s. These (probably) American dudes should stick to writing what they know.

I was hoping that during Shout! The Mod Musical’s finale, its characters would “shout” their actual, absent character names. (Their unseen beaus, after all, had real names instead of “Brown,” “Grey,” and such.) Didn’t happen. But no one goes to a jukebox musical for the stunning drama – it’s for the music. And you’ve gotta hear these folks perform it live. It makes me want to kick my heels up and … . Well, you know.

Shout! The Mod Musical runs at the Clinton Area Showboat Theatre (311 Riverview Drive, Clinton) through August 18, and more information and tickets are available by calling (563)242-6760 or visiting ClintonShowboat.org.