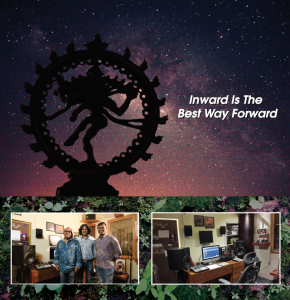 NAVI MUMBAI, MAHARASHTRA, INDIA, February 28, 2018 — Lack of concentration and the inability to focus the mind on one thing is a widespread problem, irrespective of age, gender or country. Lack of concentration affects work, relationships, school, and almost everything else. In this age of the Internet, smartphones, the social networks & information overload, the problem is even bigger and make the attention span even shorter. When the problem is severe, it might require medical attention and advice. However, if you are an average person, lacking concentration, but have no health problems as the cause of the lack of concentration, you can remedy this by listening to relaxing, instrumental music. Instrumental music is medically proven to be beneficial to improve focus and productivity.
Meet Ajit Padmanabh, a self-taught solo musician & artist from Bangalore, whose love for instrumental music and focused listening, led to the making of his debut album, Think Void, with the tagline “Inward Is The Best Way Forward”. Seeking an alternate identity which is neutral in gender, community, region, religion or nationality, he calls himself World Void Web. The concept of Void – nothing that’s everything – always fascinated him. Sony DADC released Ajit’s debut album, Think Void, on 24th November 2017, including packaging, distribution & marketing worldwide. The album features collaborations with legendary artists like Grammy Award winner and Hindustani Classical Hawaiian Guitar proponent Dr. Prakash Sontakke, Legendary Bass Guitarist Keith Peters, Rock Guitarist with his signature Carnatic leads Baiju Dharmajan and an International act from Spain, Music Saw proponent and Spain’s Got Talent Participant Adriano Fernandez.
Taking a break from his full-time job at a leading IT firm, Ajit got down to conceptualize, create and mold this album to its final shape in 4 months. He conceptualized the album and track titles after focused and extensive research on the subtlest of the five elements (Panchabhoota in Sanskrit) known as Ether/Space/Void (Akasha in Sanskrit), the essential message being Think “Void” since that’s what makes all things fall in place, that’s what makes all of what we sense, actually manifest! With influences of rock, jazz, metal, dance & fusion, Ajit arranged and recorded this multi-genre album at his home studios, Blank Point Studios and was mastered at the legendary Sterling Studio, New York.
Think Void, with its subtle yet evocative, ethereal mix of sounds, helps transport the listener to a world within oneself, bringing in concentration and enabling a focused work of creation to take shape. With every listener’s world being essentially different, an introduction of lyrics into the music would have definitely altered the listener’s imagination or concentration. Thus, World Void Web chose not to include words but instead, brought in voiceless emoting, leading the listener to focus on his/her activities, thereby improving productivity.
An avid reader, Ajit believes that each of us is experiencing 3 states at any given point in time – World, Void & Web. You could be overwhelmed watching the simplicity of rain (World), absorbing all of what you see around, breathing (Void), while lamenting about the traffic, sitting inside your vehicle (Web). This is the core philosophy of his songs and albums. Ajit firmly believes that Music has been teaching him all he knows about it.
“Those 4 months were transformational. When I opted for a break from my day job, I didn’t even have a sketch of the intended final outcome. I was a seeker, a learner. It was as though I was being guided by the Supreme one above, with sudden-born ideas and collaborations with renowned artists and engineers. The journey was surreal!”
Amidst all the “heavy” philosophy, he chuckles “Sometimes, when I listen to the tracks, I go in amazement and utter reverence to the Higher Force – Did I just play that?”
The album has received some rave reviews already. “Philosophical, musically deep, and with arrangements that will stand up to repeat plays, World Void Web’s Think Void is an album that would be best enjoyed with listeners sitting back, focusing on the music issuing forth from speakers, and contemplating what each note means to the overall enjoyment of the album” – NeuFutur Magazine, released on a bimonthly schedule, available in Ohio, West Virginia, and Pennsylvania, USA.
The first music video from the album was released recently, for the song “Memories In Raindrops”.
Watch Song Here: YouTube – https://www.youtube.com/watch?v=S1X4dA6x8n8