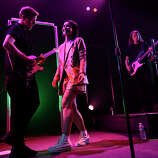 For D.C. pop band Shaed, the music dream is all about family

Chelsea Lee’s voice, gravelly on the edges, bends like a beam of light, piercing through hazy bass thumps.

“My mom used to tell people I smoked two packs a day,” Lee recalled with a grin. “She’d be saying that when I was 4.”

As the lead singer of Shaed, the Washington, D.C.-based alternative-pop trio, Lee’s voice is finding new people in new spaces. It has hypnotized crowds at Lollapalooza, on “Jimmy Kimmel Live,” at the Apple event in 2018 unveiling the new MacBook Air.

At the moment her voice was filling a more modest space: the kitchen of the band’s home in Silver Spring, Maryland.

“The garden was fun when it was thriving,” Lee said on a hot September morning, wistfully surveying the vestiges of pepper plants in a plot in their yard.

She’s standing by a side door of the band’s single-story brick house, where they make music. The three band mates are also housemates: Lee; her husband, Spencer Ernst; and Spencer’s twin brother, Max Ernst. The house is full of family photos interspersed with knickknacks salvaged from thrift stores and estate sales: a silver Buddha, book stands, a Confucius lamp sculpted from green-hued glass. All of which makes the house feel lived-in (“grandma-style,” is how Lee describes it).

In the yard, Spencer thumbs wilted pepper leaves and inspects the few fully grown vegetables that have survived. Spring and fall are tour-heavy. Summer is festival season. Not much time left over to dedicate to the garden.

The band’s increasing absences are a side effect of their success. Shaed’s breakout 2018 song, “Trampoline,” has racked up over 95 million Spotify streams and an impressive slate of remix collaborations, including one with Zayn Malik. New festival invites poured in. They made the jump from tour opener to headliner. It’s the kind of boost that could make a band feel like stardom is within reach.

On the other hand, there’s the garden. More buzz means more gigs, more travel and less time around the friends and family that keep them grounded and comfortable. Shaed is cultivating a rock ‘n’ roll dream that has less to do with jet-setting superstardom and more to do with balance. They want to be stable but not static. They want to grow but keep their roots.

How do you keep a dream like that alive?

Their routine runs like clockwork. Lee cooks breakfast, and then they go into the studio. Hours pass as progressions get sampled, lyrics get scrawled and the mic gets passed around. They take a break to recalibrate, listening to other music during as they eat: Frank Sinatra, Jaden Smith, jazz dinner playlists on Spotify.

Shaed’s sound is a medley of influences: a little guitar pop, a touch of lo-fi, glimpses of shoegaze, some R&B swagger and hints of a 1980s pep. It’s the culmination of a decade’s worth of experimentation, much of it done together.

Spencer and Max’s mother was a musician and songwriter who taught them how to harmonize. Max says there’s home movie footage of her blowing their minds by playing Heart’s “Barracuda.” Lee says that her parents had beautiful voices, too, but that they didn’t sing. She met the Ernst brothers at a show at Washington’s 9:30 Club in high school. Spencer and Max, then playing as a duo called Trust Fall, were opening for Fairfax, Virginia, band Emmet Swimming. A week later, they were all busking together at the Tysons Galleria mall.

Independently, they had sights on the teenage version of the rock ‘n’ roll dream. Both Lee and the Ernsts signed deals at 18 – her with Atlantic, them with Cherry Lane Publishing. “At the time, it was incredible,” Spencer says. “At that age, everyone wants to get signed.”

The luster didn’t last long. The Ernsts felt external pressure on their art, and their enthusiasm for songwriting plummeted. Lee’s record took too much time to drop, and she didn’t like the hired guns the studio had brought in to play with her. She felt boxed in creatively and didn’t know how to articulate what she did and didn’t like. One thing she definitely didn’t like was the feeling that the record company had its own plans for who she should be.

“I didn’t have enough experience and confidence to home in on what I wanted to do,” Lee says, “so I got thrown into a situation where I was billed as this pop singer-songwriter I wasn’t.”

The Ernsts managed to escape their publishing deal after Cherry Lane was acquired by a bigger company. They advised Lee on how she could untangle herself at Atlantic. Before long she joined the brothers’ new band, the Walking Sticks, which had a folkier vibe with shades of contemporary pop (in an online profile at the time, they listed Adele, Haim and Tame Impala as influences).

The band’s sound grew lusher, moodier. In 2016, they leaned all the way into dream pop and renamed the band Shaed, after a cloak in a fantasy novel they all read.

The band’s cluttered practice space sits just off the kitchen in their Silver Spring home. That is where they wrote “Trampoline,” the song that launched Shaed into view for many of its fans outside Washington.

They were messing around with their Roland Juno-106 synthesizer and found a chord progression that had a spark to it. They penned the lyrics in a day.

The opening line was inspired by old home movies from the Ernst family trove. “Spencer and I were at a great-uncle’s house, must’ve been 2 years old,” says Max. “He had a trampoline. The tape was messed up from years of wear and tear. Some parts were in color; others weren’t. Sections had this grainy texture. It looked like a dream.”

Last fall, the sound of Lee’s ethereal voice, singing those words, were piped through the sound system on a stage in Brooklyn as Apple CEO Tim Cook unveiled the commercial for next MacBook Air. The commercial later aired on TV and streamed online. It was Shaed’s worldwide debut.

On their own screens, the band watched their star rise. “Seeing the views go up on the YouTube video, all of the comments saying things like, ‘Omg what band is this’ – it was amazing,” Spencer says.

“Trampoline” reset Shaed’s horizons. The collaboration opportunities expanded. The track turned into a radio fixture and charted on lists such as the Top 40, Hot AC and AAA. It went gold in June after being the No. 1 Alternative Song in the country for two weeks. As of October 19, 2019, “Trampoline” occupies the No. 22 spot on the Billboard Hot 100.

These days, Lee worries less about finding her voice than keeping it in good working condition.

“That’s the name of the game for us,” Max Ernst says. “Keeping Chelsea’s voice healthy. So we don’t ever go out and party after a show. We don’t have a lot of free time on the road.”

Lee’s lost her voice twice on tour. One time, after five consecutive shows, little sleep and a brutal red-eye flight to Atlanta for Music Midtown, her vocals were in rough shape. The band rushed her to urgent care for a cortisone shot. Those injections can cost $1,000.

The band has taken measures to protect her voice. “Now I have a whiteboard to write the things I want to say,” she says.

More people are listening now. This fall, Shaed embarked on a headlining tour across North America. In October, they played at the 9:30 Club. It was a homecoming – the place where Shaed’s story began, before the members knew what they would be.

Before they took the stage, the band mates entertained a posse of family who had come to see them perform. There was a “graduation day” vibe. This night was a big one.

Hundreds of fans packed the ground level and upper balconies. Music emerged from the darkness. Cue the flashing lights – and that voice.

Lee strutted and shimmied across the stage in a bedazzled blazer-and-skirt combo. The Ernsts manned synthesizers behind her.

During an interlude between songs, Spencer told the audience that it had been 10 years to the day since Max came out to him. It had been 12 years since the three first met at this venue. Lee announced she and Spencer just celebrated their first anniversary. Could one moment hold so many milestones?

They closed with “Trampoline.” Lee began with the lyric about dreams. At the end, their friends, family and fans joined their voices with hers:

“When I dream of dying / I never feel so loved.”