A sudden tap on the shoulder telling you “the band wants you to perform with them” is a dream of many would-be rock stars — but that’s more or less what happened to Selkirk, Man.’s Goody Grace.

On Aug. 8, as 17,000 fans sang along at the top of their lungs with Blink-182 at the Los Angeles Forum, the crowd witnessed a breakthrough moment for Grace as he joined the band to sing the band’s hit record Adam’s Song — following up a cameo by an already-established star.

“I went out right after Lil Wayne.… Everyone was kind of freaking out around me,” said Grace, grinning ear-to-ear as he recalled the moment.

“I really wish I could go tell my eight-year-old self that Blink-182 brought me out to sing. [It was] a big switch being flicked in my career.”

The 22-year-old musician from Selkirk, Man. — a city of about 10,000 just north of Winnipeg — already had a relationship with the band, but hadn’t expected to be asked to perform with them that night at the L.A. Forum.

Grace, back home spending time with his loved ones, talked with CBC News on a warm, windy day in Selkirk, while taking in the views from the city’s waterfront. He comes from humble beginnings, growing up a short drive away on the west side of town in a trailer park, where he lived with his single mother, grandmother and brother.

He describes the feeling of taking the stage in front of a sold-out show. After spending five years in Hollywood trying to live out his dream, Grace says he finally felt he had really “arrived.”

While bands will sometimes bring out a well-known local musician or a superstar for a cameo appearance at their shows, Blink-182 decided to use their platform to give some shine to Grace. Travis Barker, the drummer for the veteran California rockers, took a liking to Grace after hearing his music through social media channels, and began inviting him out to shows — and sometimes inviting him to perform with them.

And that led to their latest project — a music video, with Grace’s part shot in Manitoba.

“It is a collaboration between me and Blink-182, and we just shot the video for it up in my hometown in Selkirk,” said Grace.

The Manitoban has begun to make a name for himself among other musicians — with Blink-182’s Barker, hip-hop artist G-Eazy and other big name musicians not just endorsing his work, but lending their talents to it.

Barker, who has crossed over between rock and rap music frequently, has advised Grace on how to navigate the music industry. As Grace began putting his first album together, Barker was among a couple of high-profile artists who lent his creative juices, too.

“He’s been a great help with the process of my album. We have a few songs that he’s drumming on, and he’s just been a really good life mentor as well,” said Grace.

Grace said he always wanted to leave his hometown and explore other places, but there is a sense of comfort and warmth in his hometown of Selkirk. (Ahmar Khan/CBC)

G-Eazy — who has multiple Top 10 hits — has also collaborated with Grace on a track, and produced the upcoming album.

Beyond their musical abilities, Grace is grateful to have friends who keep him grounded.

“It’s nice to have these people that … are like mentors to me, but also really good friends,” he said.

“I feel like I’ve been lucky enough to be surrounded by a lot of good people.”

Those good people Grace speaks of include his grandmother and mom.

“They raised me, and they’re super big fans of music and always listen to music,” he said. “It was nice to grow up in a house where I was learning and hearing all these new things.”

At the age of four, Grace was given a guitar by his mom and as he entered his pre-teens, the musical love affair began.

He began finding his own personal favourites, which included Blink-182, My Chemical Romance, Eminem, Bob Dylan and more. But he was never just a casual fan.

“If I liked a band or an artist, I’d have to hear all the music from the start to the end, and now I have this weird memorization of whole discographies,” he said.

He wasn’t interested only in the sound of the music, but also the technical aspects of creating and writing it, to which he devoted hours every day.

“I just started making beats and producing and stuff on [the music recording program] GarageBand, and it’s all I really did through middle school and into high school,” he said.

“[I was] always working, writing and researching music.”

As with many other millennial musicians, Grace’s competence with social media became the launching pad for his career — even while on a shoestring budget.

“Selkirk is a super small town, so there’s not really any studios here or many opportunities in the music scene. I put myself out there through social media and YouTube,” he said. 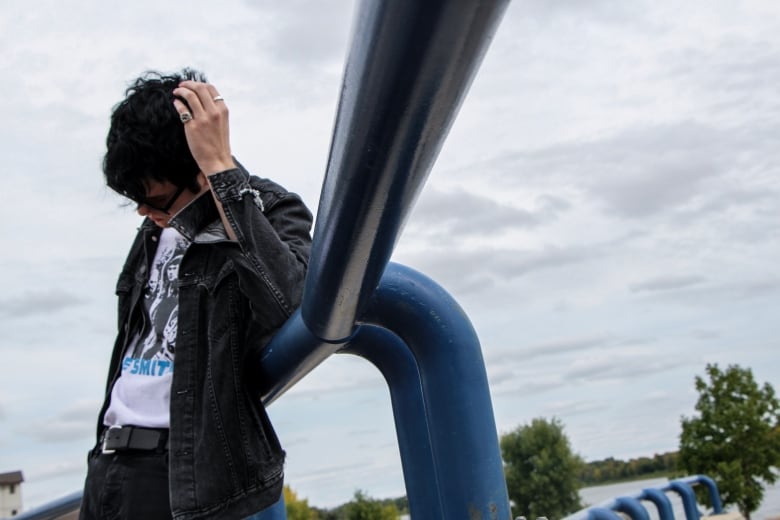 He started recording covers of his favourite songs and putting them on SoundCloud and YouTube, and slowly realized he had found his calling.

“Music’s been the only thing, really, that’s ever enticed me in a big way.… It’s all I ever really even cared about,” he said.

Then it happened — Grace was discovered.

Grammy-nominated producer Cisco Adler came across Grace’s work online, and messaged him on Twitter during his Grade 11 school year. At the age of 17, with little money, Grace made the decision to go to Los Angeles.

“I lived on his couch and made music for, like, a year,” he said.

“It seems like a really scary thing, but I was never really scared through the process. I just kind of dropped out of school and never looked back.”

While Grace doesn’t shy away from hard work, he says he faced struggles when he moved to L.A.

“I was so broke, like, for three years, living on my now manager’s floor. I’d go to Europe [as part of a] tour, but I’d only have a couple hundred dollars, and think ‘how will I make do?'” he said.

Those early days involved a lot of meals consisting of 7-Eleven taquitos, wearing his manager’s clothes to go to events, and a constant awareness that his pockets were empty.

But even so, seeking fortune has never been his goal, he says. Instead, Grace says he wants to make music to connect with people, and to be an inspiring voice.

“I want to make art and I want to change kids’ lives, and to help people the way music and art I’ve been into [have] inspired and helped me.”

Grace’s sound is a mix of punk rock, classic rock and at times hip-hop, which he says is the result of the two very different places he calls home.

“When I was in high school, [all] I wanted to do was get out of my hometown and go see the world and stuff, so it’s nice now that I get to [do that] and I still get to come back here,” said Grace. “I’ve made probably 50 per cent of the album here.”

His roots are still very much in Manitoba, and his love for Selkirk on constant display as he proudly shows off a tattoo of the city’s landmark water tower on his right arm. 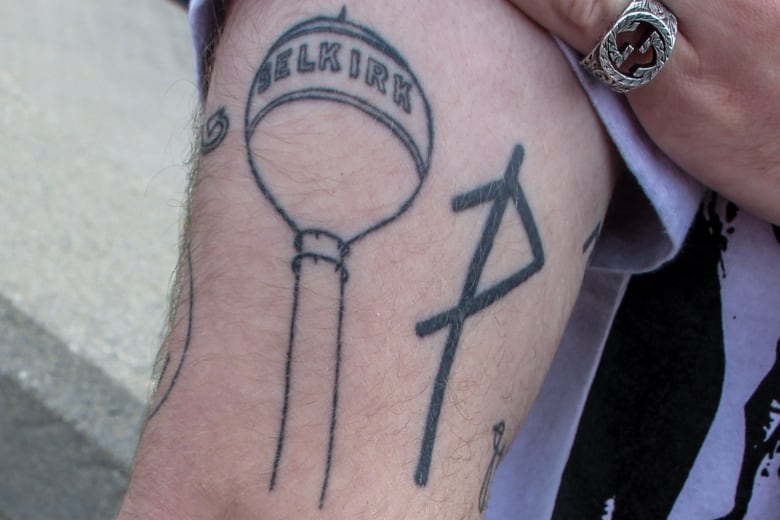 Grace has a tattoo of Selkirk’s landmark water tower on his right arm. (Ahmar Khan/CBC)

Much as Bruce Springsteen speaks of his love for his hometown of New Jersey, Grace wants his fans to hear his love for Manitoba.

“I want my music to feel like Manitoba to people who’ve never been here,” he said. “I think Manitoba is a really beautiful place. There is this weird haunting, but beautiful, energy here.”

While the allure of bigger cities is understandable, Grace is his truest self at home in Selkirk, he says, where he can take his walks along the river, or be near the famous water tower.

“[When] you do leave … you realize, you know, there’s, like, beauty in the simplicity of small towns,” he said. 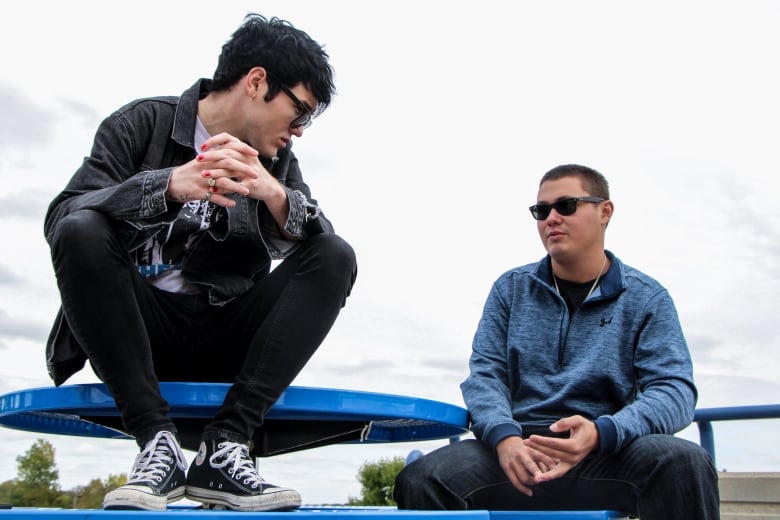 Grace chats with a friend about his upcoming music video with Blink-182, which was partially shot in Selkirk. (Ahmar Khan/CBC)

He knows he’s not a household name in Manitoba yet, but in his hometown, he’s well-known and liked. During his interview with CBC, cars full of young people driving by shouted praise toward him.

Grace, who plans to release his first album later this year, knows that he’ll have to keep working to reach his full potential.

“I still feel like I’m 15 trying to break through on the internet, so I wouldn’t say I’m established. But I’d say I think I’m on a good path, and I’m grateful.”