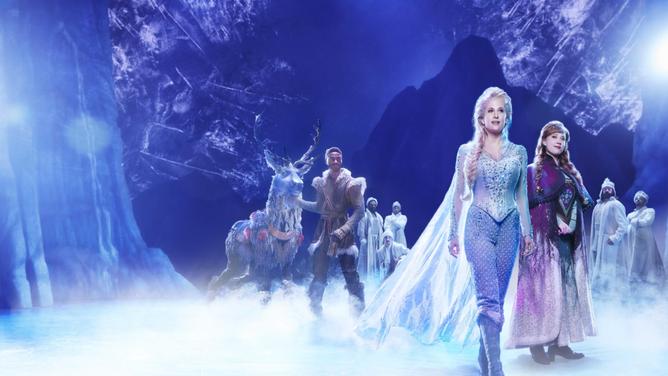 As a little girl, Kristen Anderson-Lopez — joint winner with her husband Robert Lopez of a songwriting Oscar for the Disney film and musical franchise, Frozen — would hide beneath the record player table at home and listen to music.

It was Anderson-Lopez’s way of coping during therapy sessions for her special needs brother.

“I knew what it was like to live in a family where there’s a lot of worry about one sibling, and a lot of attention on one sibling who’s really struggling,” she says, sitting in the bright Brooklyn studio in New York where she and Robert wrote many of the songs that Australians will hear when Frozen The Musical opens at Sydney’s Capitol Theatre in July 2020.

“Show me a family who hasn’t had some moment that defines — whether it’s addiction or depression or an eating disorder. If one person is really struggling with something, what often happens is the family gets locked into roles. That’s why Frozen is more than just a princess story. It’s very psychological.”

Anderson-Lopez studied psychology and theatre at university and Tom Schumacher, Disney Theatrical Productions president, has been a beneficiary.

“Oh, yeah, she comes back to that all the time. She’s been my personal therapist on a few occasions,” Shumacher jokes during an interview in his Broadway office.

Frozen — both the 2013 movie and the 2018 musical spin-off now playing Broadway’s St James Theatre — tells the story of a royal family whose Princess Elsa has the special power to turn anything she touches to snow and ice.

Elsa and younger sister Anna have a lot of fun with Elsa’s powers, making a snowman out of nothing. But when Elsa accidentally hurts Anna with her powers while they are playing, Elsa goes into panic mode, locking herself away and refusing to see her sister in case she hurts her again. Confusion and sadness quickly take root in Anna, while Elsa grows increasingly isolated and frightened of the powers that make her different. 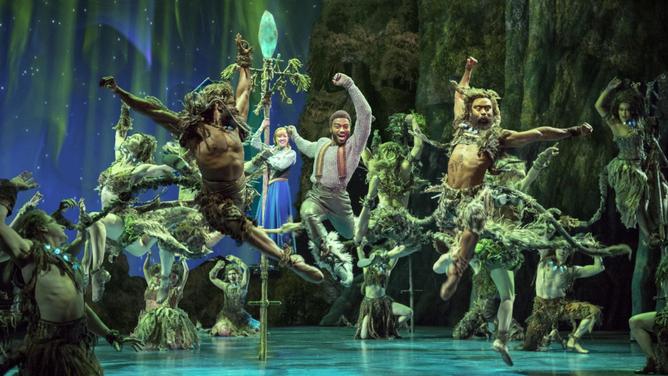 On Broadway, the role of Elsa is being played with queenly poise by Caissie Levy. Levy agrees her character can be cruel, but points out that it is born only of fear.

“She represents anybody that’s ever felt like an underdog or misunderstood or lonely,” Levy says. “She’s a great role. She’s very human.”

Why doesn’t Elsa just confide in Anna so they can be close again?

“I think it goes back to her parents. They made the mistake, as many parents do, in trying to protect their children. Elsa was taught from the time she was a tiny little girl that the way she was bad, and that she had to conceal it and it was the only way to protect her sister. It’s a complete lesson for parents bringing their kids to the show,” Levy says.

Casting Elsa and Anna will be key to mounting Frozen in Sydney. Auditioning has begun. In December, Schumacher and Frozen director, Englishman Michael Grandage, fly to Sydney to finalise the cast and do whatever it takes to make Frozen happen 16,000km from Broadway.

The logistics are mind-blowing. 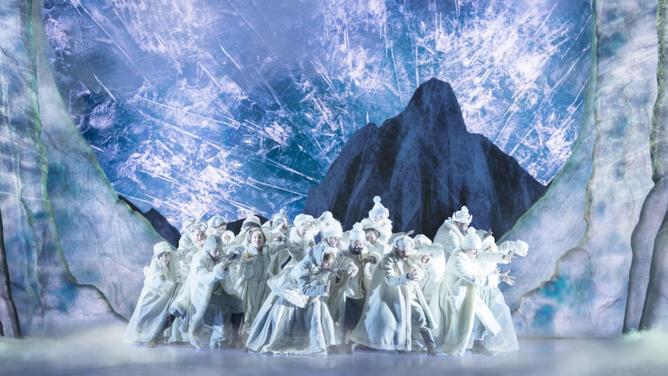 Just ask Lisa Dawn Cave, former Frozen stage manager whose recent promotion to production supervisor puts her in charge of Frozen on Broadway, of its forthcoming North American tour, and of its staging in Sydney — the show’s first international destination.

“All those shows that happen, I will be the point person that knows the show and can tell them how it functions, especially technically,” Cave says.

She will locate to Sydney for a couple of months before Frozen opens here. Cave is a former dancer who earned a place at a famous performing arts high school in New York. “Do you remember the movie, Fame? That’s the high school I went to,” Cave says.

When a car accident ended Cave’s dance career, she used her dance knowledge to become a stage director. “A dancer’s mind picks up things and retains things so quickly that I found it helped me,” Cave says.

Broadway legend Hal Prince hired her as a stage manager for Show Boat in 1994 and Cave has been in demand ever since. In Sydney, she will train local stage managers, using a manual that Cave created from scratch. 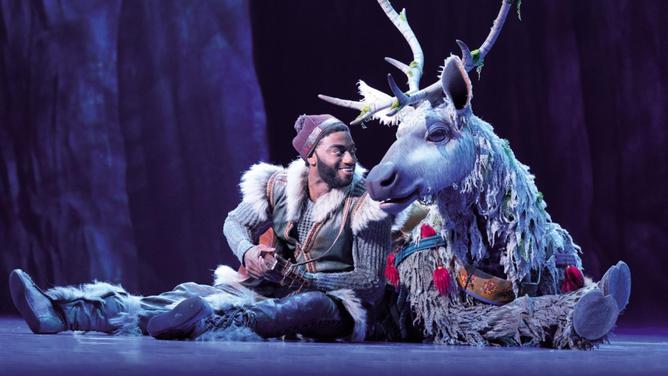 “The call script is the actual script, and in the script I had to put the places of where things happen in the show — where the scenery would move, where the lighting cues would go, when are the actors entering and exiting to make sure the timing is correct,” Cave says.

While it will be Cave and Grandage’s first trip to Australia, Schumacher has visited Australia many times since 1988. He says Disney Theatrical Productions feels at home in Sydney where it has toured the musicals Mary Poppins, Aladdin and The Lion King. But Sydney will be Frozen’s premiere international venue for the simple reason that the Capitol Theatre in Haymarket was available and ready. “When you have a big show like this, where it’s going has a lot to do with schedule and timing,” Schumacher says.

You might imagine the Disney mothership pouring a fire hose of dollars into its musical production arm, but Schumacher says no. About 20 Disney musicals are playing around the world, all “feeding money into us”.

“We’re a profit centre. We make money,” he says.

Schumacher is “very comfortable” with how Frozen is performing on Broadway. “Frozen is fitting into the Mary Poppins model, the Beauty And The Beast model. There was great interest when it started and now it’s just part of the Broadway landscape.” 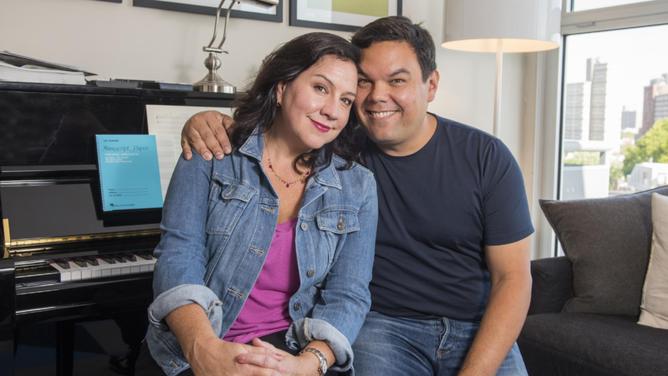 At the time of opening, Frozen held the record for the largest advance ticket sales in Broadway history. It went on to set and break house records.

Schumacher hopes for good reviews of Frozen, but says it’s more important the public loves it.

“Our shows that have had the greatest reviews are the shortest runs we’ve had. I can’t explain it. Beauty And The Beast got slammed and it ran 13 years and ran all over the world and is the most beloved property we’ve ever done,” he says.

The longer a show runs, the more it evolves to reflect the changing world around it, says Grandage. Frozen will do the same. For instance, new technology to be employed in Sydney is more advanced than what’s currently in the Broadway show. And the Australian cast, far from being forced into a Frozen template, will be encouraged to input their ideas.

“The whole Frozen family is a very large extended family because the people who created the movie are all the creative artists of the Broadway musical and the musical that’s going to Australia,” Grandage says. 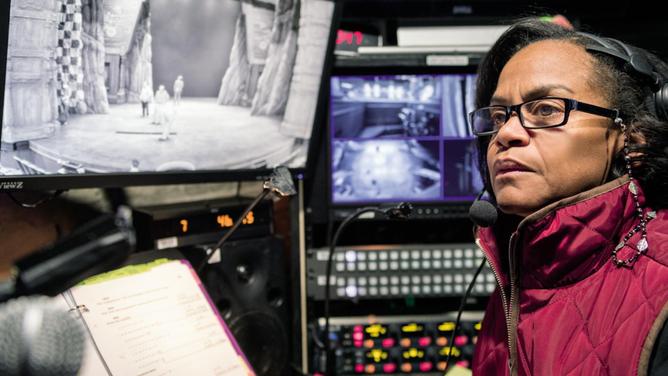 “The Frozen family is a wonderful thing to be part of and the Australian production will become part of that.”

Back on Broadway, Caissie Levy leaves Frozen in February for new projects and the rare chance to tuck her son into bed at night.

“He sleeps with his Elsa doll every night,” Levy says. “He calls it Mamma Elsa. (The show) has been an amazingly special thing to share with my little boy.”

* Pre-sale tickets now available; other tickets on sale from 9am October 25 at frozenthemusical.com.au