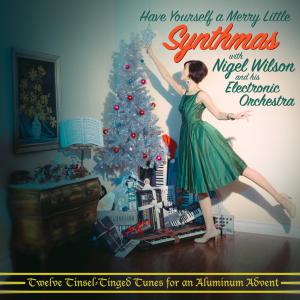 NASHVILLE, TN, USA, December 21, 2018 — Released November 30th via Nashville-based United Alliance Music Group/Sony/Orchard in association with Carousel Music Group, Los Angeles-based composer Nigel Wilson and his Electronic Orchestra holiday album, Have Yourself a Merry Little “Synthmas” are celebrating the warmth, comfort, and camp of this season with their debut effort, which is available now for purchase and streaming on all digital outlets

With the 50th anniversary of Walter Carlos’ seminal “Switched on Bach” Nigel Wilson, an arranger, composer, performer and graduate of the world-renowned Berklee College of Music, delivers twelve lovingly woven arrangements of Holiday Classics recorded without MIDI in a tradition and style that pays tribute to the greats of the instrument.

Presenting moods from the tender nostalgia of “O Holy Night” to the satisfyingly silly strut of “It’s Beginning to Look a Lot Like Christmas”, Synthmas creates an ambiance that makes the perfect soundtrack to the holidays. With a mix of eras represented, including several songs in the public domain Synthmas features unique interpretations of standards of the season ranging from thirty seconds to four minutes that’s a clean fit in any holiday playlist.

Nigel Wilson is a lifelong devoted fan of both Christmas and Synthesizers. He now lives in LA, composing video game music, touring and recording with various artists and his own project, “Big Science.”