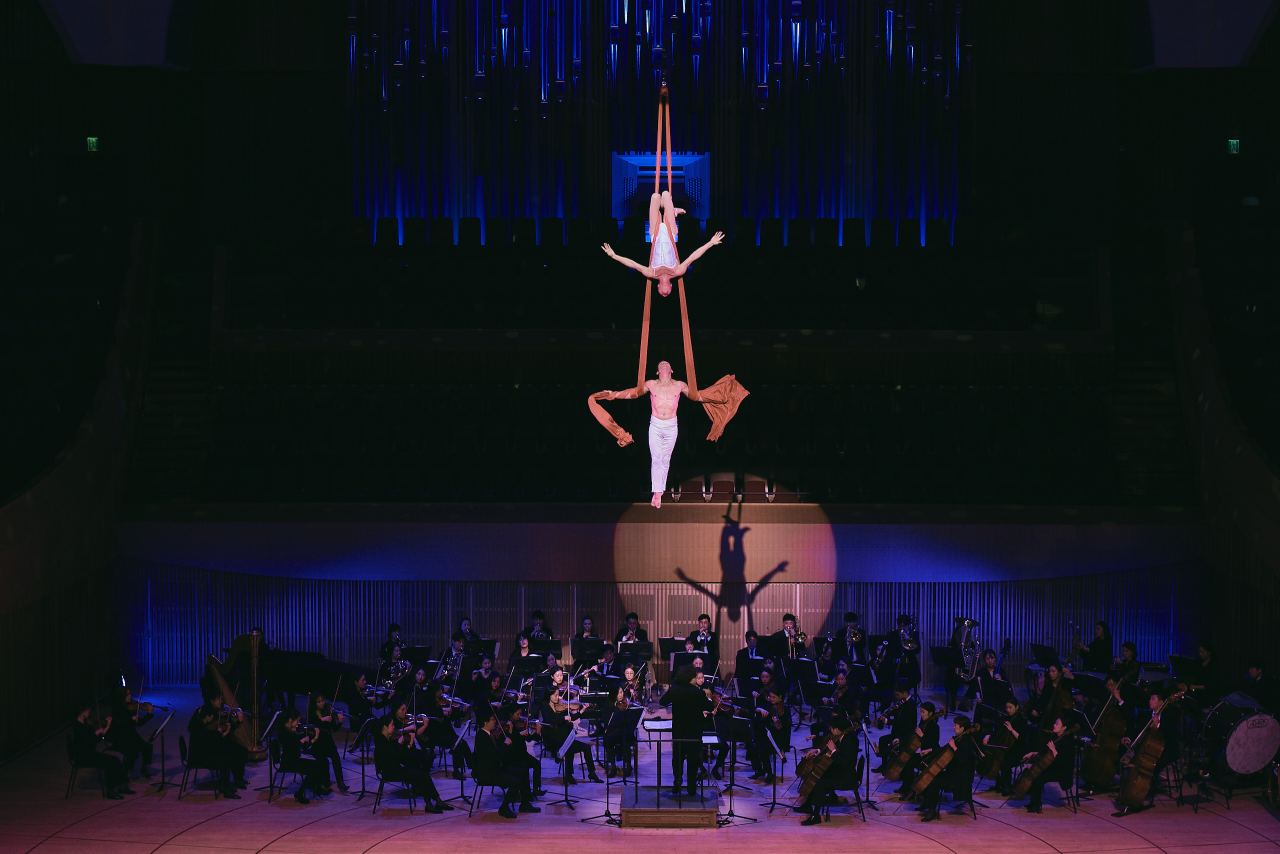 Accompanied by Wagner’s “Ride of the Valkyries,” an aerialist in red trousers flew high above the conductor, the orchestra and the audience. He danced in the air — suspended midair as he held onto a piece of red silk fabric — looking like an incarnation of a true Valkyrie.

Conductor Paik Yun-hak led the Prime Philharmonic Orchestra for the Seoul performances. Unlike conventional classical music performances, the show began with Paik asking the audience to clap during the performance and to shout out exclamations whenever they wanted, as much as possible.

The performance started with simple yet bewildering circus acts — juggling, costume changes and hoops — getting the audience excited for more dramatic stunts.

Two aerialists fly high in the air while the orchestra plays the Valse from Tchaikovsky’s ”Swan Lake.“ (The Lotte Foundation for Arts)
The highlight of the show was the aerialists who flew high above, performing acrobatic movements while hanging onto silk fabric. Their movements were synchronized to the third movement from Brahms Symphony No. 3 in F major and the Valse from Tchaikovsky’s “Swan Lake.” The audience gasped in awe when the aerialists carried out bold stunts without safety devices. 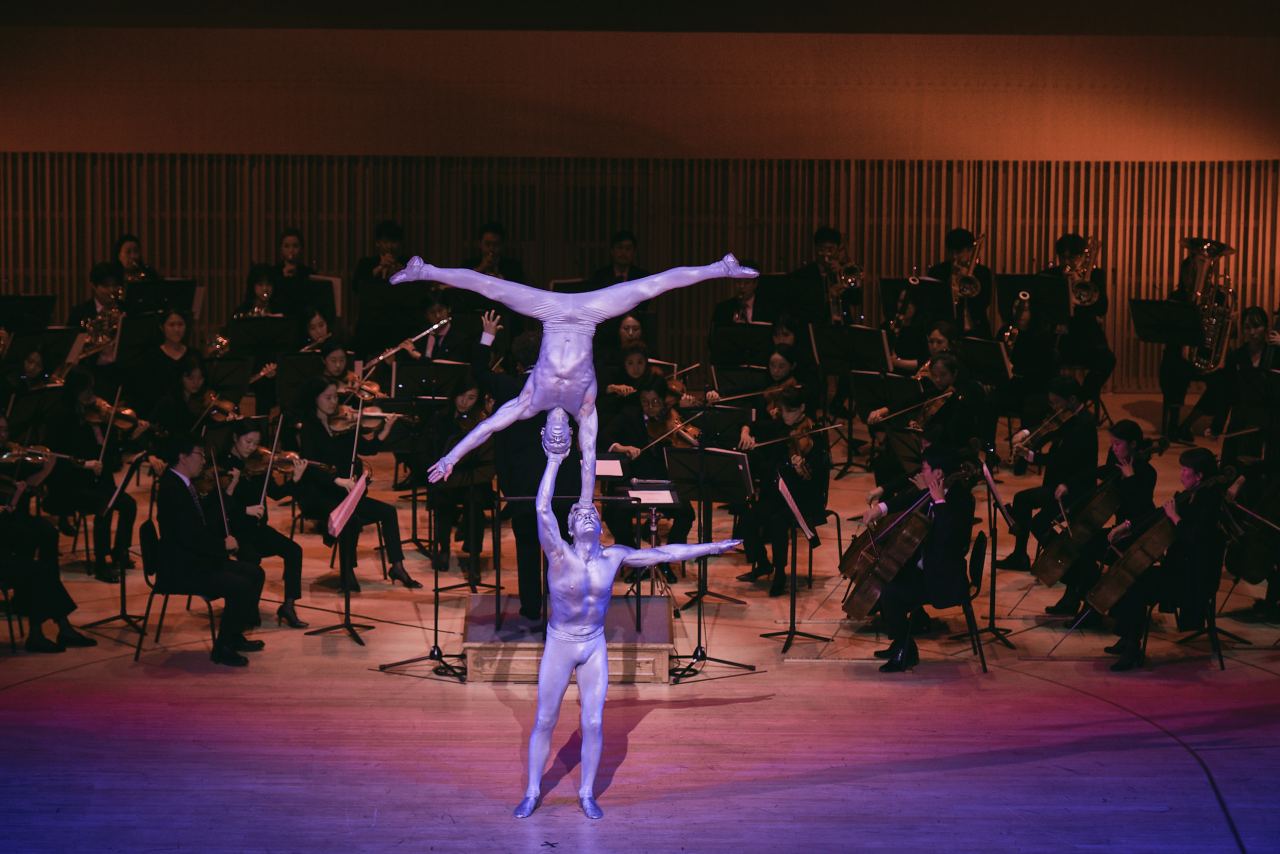 Two strongmen perform while the orchestra plays Sibelius’ “Finlandia.” (The Lotte Foundation for Arts)
Cirque de la Symphonie provided an interesting take on interpreting classical music. The circus acts allow children and people who are not familiar with classical music to understand the meaning of the classical compositions — the true emotions that the pieces can evoke.

For example, when “Dance Boheme” from Bizet’s Carmen Suite No. 2 echoed throughout the concert hall, a court jester juggled six electric rings. The audience were able to appreciate the dynamic beauty and liveliness of the composition rather than just watching the orchestra perform. 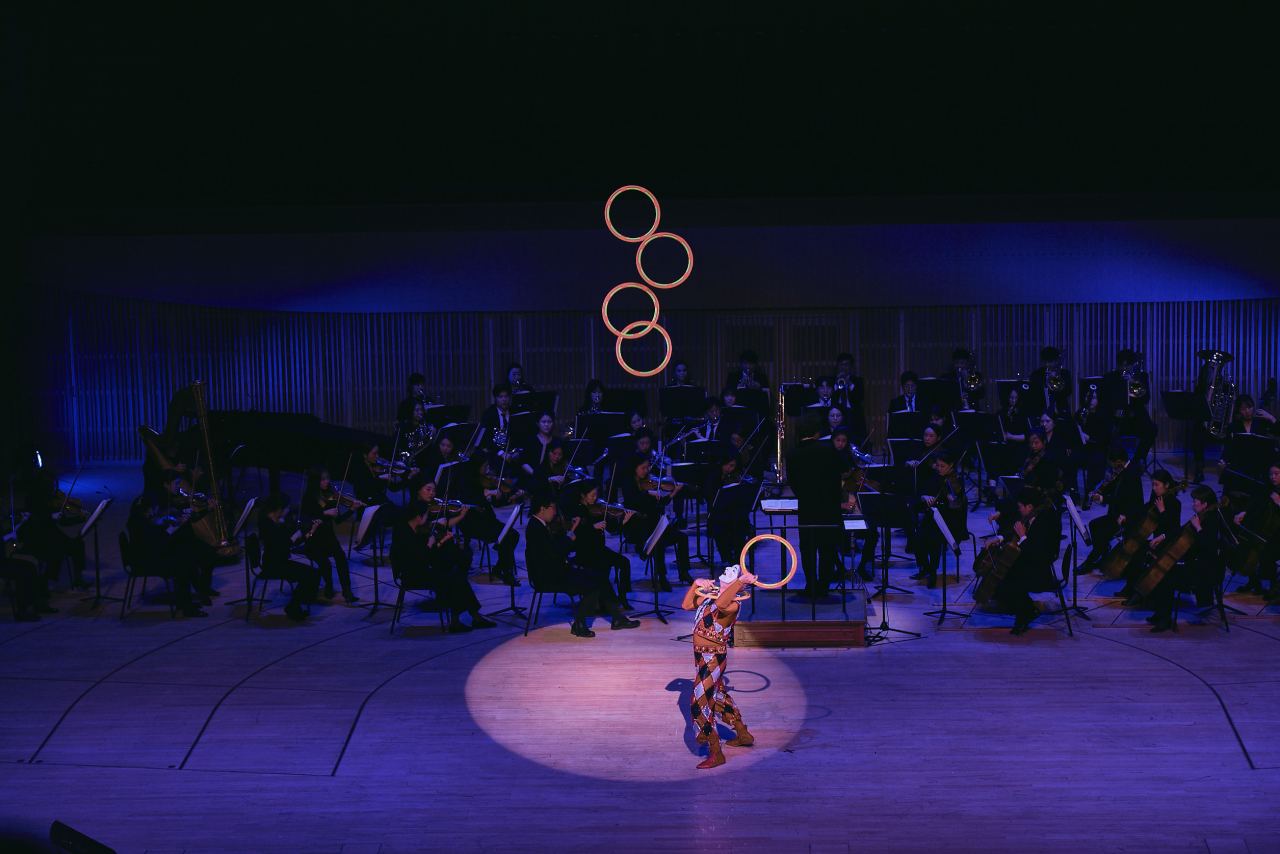 A court jester juggles electric hoops to “Dance Bohome” from Bizet’s Carmen Suite No. 2. (The Lotte Foundation for Arts)
The troupe, with more than 10 years of experience, adapted to the limitations of the concert hall’s stage with a compact and simple production.

However, the show may not be a perfect fit for classical music aficionados. It is quite difficult to focus solely on the music, as some acts are more focused on movements, such as when a circus troupe member changes costumes onstage in a split second. Also, the constant applauding gets in the way of auditory appreciation.