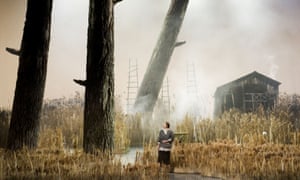 My corona-listening is a mix of random v planned. Switching on BBC Radio 3, but missing the beginning of a piece, is one kind of random. The fabulous viola tone in Schoenberg’s intense String Trio (on BBC Sounds until 11 June) turned out to be that of Lawrence Power – I should have guessed – playing with Ilya Gringolts and Daniel Haefliger. Hitting on Poulenc’s Concerto for Two Pianos, with Shin-Heae Kang and her mentor Marta Argerich as soloists with the NDR Radio Philharmonic Orchestra was another plus (on BBC Sounds until 12 June).

Poulenc embraces extremes, so an air of contemplation is never far from an irresistible joie de vivre and, here, a Mozartian vein coalesces with unmistakably Poulencian harmony. The composer himself often performed this work with Jacques Février, but how intriguing to discover that he gave the first London performance with Benjamin Britten in January 1945. They must surely have talked Balinese gamelan music, whose inflections colour the first movement. Roger Nichols’ new book will doubtless elucidate.

That concerto sent me searching for the Poulenc cantata premiered by the BBC Singers in London in March. Figure Humaine, for double choir, sets eight poems by Paul Éluard: fast and brilliant alternates with slower and sad, culminating in his paean Liberté, a final tour de force. This single poem was recognised as being so important that, in 1942, the RAF dropped copies to the resistance in France, a symbolic gesture of fraternité and egalité that seems a world away from today’s insular rhetoric.

Recent talk of Pinocchio and his nose demanded that I look out Philippe Boesman’s opera based on Carlo Collodi’s fairytale of the wooden boy. Collodi intended his original allegory to have political edge and Joël Pommerat’s 2017 Aix-en-Provence staging made it darker again, underlining the conflict between fiction and reality, lies and truth. But, frankly, for all that Chloé Briot’s Pinocchio was sung with great panache, I found the puppet a bit too ADHD for comfort and gave up on it.

Now’s the moment to say a big thank you for the techno-wizardry giving us a different kind of “live” and, across media platforms, demonstrating musicians’ ingenuity and adaptability. Audio-visual artist Kathy Hinde organised the 840 requisite iterations of Erik Satie’s Vexations to mark the composer’s 154th birthday on 17 May (so successful that another is planned for 12 June). The repetitions were soothing rather than vexatious. Llŷr Williams should have been performing Beethoven’s 32 piano sonatas in Mexico this month: instead, Signum has engineered it to beam the cycle direct from his home in North Wales. It’s been remarkable playing thus far. There are three recitals left – 29 May, 1 and 3 June – with Ops 109, 110 and 111 triptych closing the series.

Fundamental as Beethoven is, by way of antidote to potential anniversary overload, I also bop in the kitchen to a tape of Chuck Berry. The first track is Roll Over Beethoven. No guilt involved, though best blot out his “I got a rockin’ pneumonia” line…

Rian’s pick for the coming week

I’ll be watching Rimsky-Korsakov’s The Legend of the Invisible City of Kitezh, considered his operatic masterpiece, a “Russian Parsifal”. Telling of love and war, heaven and hell, the possibilities of redemption and utopian paradise, it covers most bases. Meanwhile, Invisible Cities is the title of Charlotte Bray’s four-movement work for viola and piano, where she takes Italo Calvino’s 1972 novel as the impulse for making musically connecting threads, encouraging us to do the same.