Alanis Morissette and her milestone album Jagged Little Pill are back in the spotlight, with a new Broadway musical inspired by the monster-selling 1995 alt-rock record sparking a wave of nostalgia and appreciation.

The Ottawa-born singer-songwriter was the woman of the hour in New York Thursday night as Jagged Little Pill the musical celebrated opening night on Broadway.

The musical is part of a renaissance of sorts for the singer. Following the recent birth of her third child, Morissette is poised to release a new album (Such Pretty Forks in the Road will be her first in eight years) and embark on a 31-stop North American tour in 2020.

It’s been more than eight years since Morissette was first approached about turning her music into a stage musical.

“I thought, I’d be into that — maybe,” the Grammy and Juno winner recalled from the red carpet on Thursday.

She added that she’s been patient in the search for the right collaborators. Having felt both the positive and negative glare of the limelight before, she was confident moving at her own pace and in the face of any potential criticism.

“My dad said the greatest thing when I was a kid. He said, ‘People are going to love you, they’re gonna hate you and they’re not going to care. So just keep doing what you do.'”

Broadway’s Jagged Little Pill follows a modern-day family struggling under a mountain of problems (opioid addiction, sexual and racial identity, rape and youth activism, for starters). The complex tale is woven together by songs from Morissette’s album (including a show-stopping rendition of the blistering You Oughta Know), along with hits from later albums and a few new compositions.

With a story by Diablo Cody, the Oscar-winning screenwriter of Juno, the production is directed by Diane Paulus, the Tony-winning veteran of musicals such as Pippin, Waitress, The Gershwins’ Porgy and Bess and the acclaimed 2009 revival of Hair.

“I knew the show had to be visceral and ritualistic and we had to deliver that abandon that you associate with Alanis. That was a guiding feeling for me. But I also knew that for good theatre to work, we needed a story. We needed characters,” Paulus said, before heading into the Broadhurst Theatre Thursday night.

“The amazing thing? Alanis was completely behind that. She didn’t want this to be about her. She wanted it to be a new story. She wanted it to speak to our times today. She was the number one person encouraging us to make something original.”

‘Right up in your grill’

Jagged Little Pill and Morissette’s distinctive voice and perspective arrived as an exhilarating injection into the mid-’90s mainstream music scene.

In the wake of the Seattle grunge explosion and amid a music video landscape populated by acts like Pearl Jam and Smashing Pumpkins, Jagged Little Pill arrived like a hurricane. It was angry, complicated and unfiltered, but also accessible, hopeful and catchy. 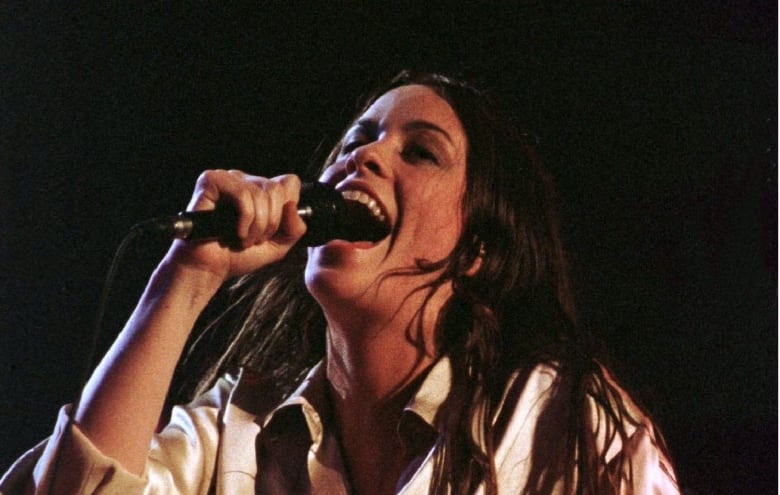 It went on to top music charts in more than a dozen countries, sell more than 33 million copies worldwide, pick up four Grammys and five Juno Awards and join the list of the best-selling albums of all time.

“My memory of that point in time was there were a lot of angsty male, groaning voices,” said Toronto-based culture writer and editor Sarah Liss.

Despite the popularity of riot grrrl culture in underground channels, Liss said music that tapped into “a feeling of messy catharsis, and articulated it from a female-identified point of view, ” was hard to find in the mainstream. Morissette’s album instantly set her apart from other popular female pop-rock singer-songwriters of the era, like Tori Amos and fellow Canadian Sarah McLachlan.

“It wasn’t hiding in the shadows. It was something that was right up in your grill,” Liss said.

There was an inevitable backlash to Jagged Little Pill. It included questioning the authenticity of the former Canadian dance-pop star, debates over the definition of irony as well as the era’s rigid musical environment, which cast suspicion on artists deemed pop. “Anyone who kind of stepped out of their lane was confusing matters,” Liss recalled.

Still, Morissette’s approach would prove prescient. There’s no “one lane” for today’s top acts, who readily recount their flaws in lyrics and eschew the notion of musical genres. A generation of artists — including Taylor Swift, Avril Lavigne, Kelly Clarkson and Serena Ryder — have cited Jagged Little Pill’s influence on them.

Imagine, for instance, what it must have been like to be a young woman hearing You Oughta Know in 1995. Beyond the scandalously direct line about “going down on someone in a theatre” or its shocking F-bomb, “it was incredibly gutsy to create a charting pop single in which a female performer is calling out a predatory dude,” Liss said.

“It was so bracing… and that is something that is very resonant right now.” 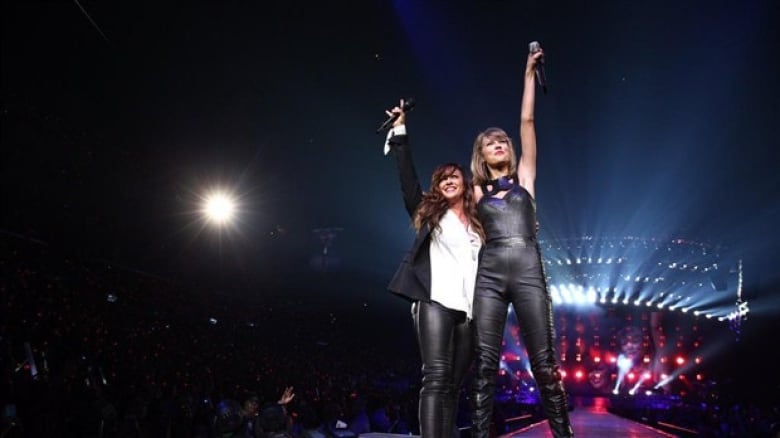 Morissette appears onstage with Taylor Swift in Los Angeles in 2015, during the latter’s 1989 tour. (Taylor Swift/Twitter) Moving beyond hit songs ‘in a new jacket’

Appreciation from musicians is one thing, but successfully translating a pre-existing body of music into a stage production is a whole other ballgame.

“The problem with jukebox musicals in general is that the songs of course are not written for the drama, so they often don’t fit,” said Jesse Green, a theatre critic for The New York Times.

Not only that, he added, pop songs have an entirely different relationship to their audience than theatre songs, which exist as a key part of a production’s narrative.

Another pitfall of the jukebox musical genre can be the tendency toward a thinly sketched plot that results in something more akin to a staged version of a greatest-hits concert — an exercise in nostalgia that’s ultimately unsatisfying for fans of theatre or of the original artist.

“Part of what [Jagged Little Pill the musical] cleverly does is really take you away, immediately, from any feeling that they’re just trying to retell the songs in a new jacket,” said Green, who reviewed both the musical’s earlier tryout at the American Repertory Theater in Cambridge, Mass., as well as the “overhauled” production now on Broadway.

“It’s key to the success of the show that these songs are not performed as imitations of the way she sang [them], but using the skills of acting to explore them in a way that she wouldn’t have… A problem with a lot of [jukebox musicals] is that they are trying to imitate the [original artists] and that satisfies no one, right? Because they’re in fact not the original.”

According to Vivek Tiwary, the theatre producer who convinced Morissette that Jagged Little Pill could become a musical nearly a decade ago, the production was never going to centre on her and was always going to explore the themes and sentiments of her music.

“When [Jagged Little Pill] came out, it forced people to listen to uncomfortable truths. It forced you to pay attention to the difficult things that were going on in your life. And by accepting the truth and leaning on people in your community that you love and that can help you, fighting your way to a place of hope, empowerment and hopefully survival and happiness… that’s the story I want to tell,” Tiwary said.

“That’s what I told Alanis. I wanted to create a piece where people would walk out and want to change the world.”