While it’s possible to cut the cable TV cord and still get most of your favorite channels, there are about 100 notable exceptions.

I’m referring to Music Choice, the big bundle of radio-style music channels included with many cable and satellite TV packages. Even in a world of boundless streaming music options, there’s something to be said for just setting the TV to a musical genre you enjoy and letting it play, especially with a nice soundbar or surround-sound system hooked up.

If you’re missing that experience as a cord-cutter, don’t despair. There are lots of other ways to easily enjoy music through your TV, some of which come pretty close to what Music Choice offers on cable. Here are some of the best alternatives that won’t cost you a penny extra:

The closest equivalent to Music Choice on streaming devices is Dash Radio, a free internet radio app with 88 stations and no extended commercial breaks.

As Radioworld’s James Careless reported last year, Dash prides itself on having stations curated by human DJs, who have some latitude to pick songs that aren’t just requested by focus groups. Those DJs may occasionally read a 30-second ad spot, and brands can run their own sponsored stations, but there are no lengthy ad blocks like you get with terrestrial radio.

The other nice thing about Dash Radio is how simple it is. Just pick a genre, choose a station within that genre, and start listening. You can also add stations to a Favorites list for easier access later. The TV version of Dash Radio is available on Roku, Fire TV, and Apple TV. 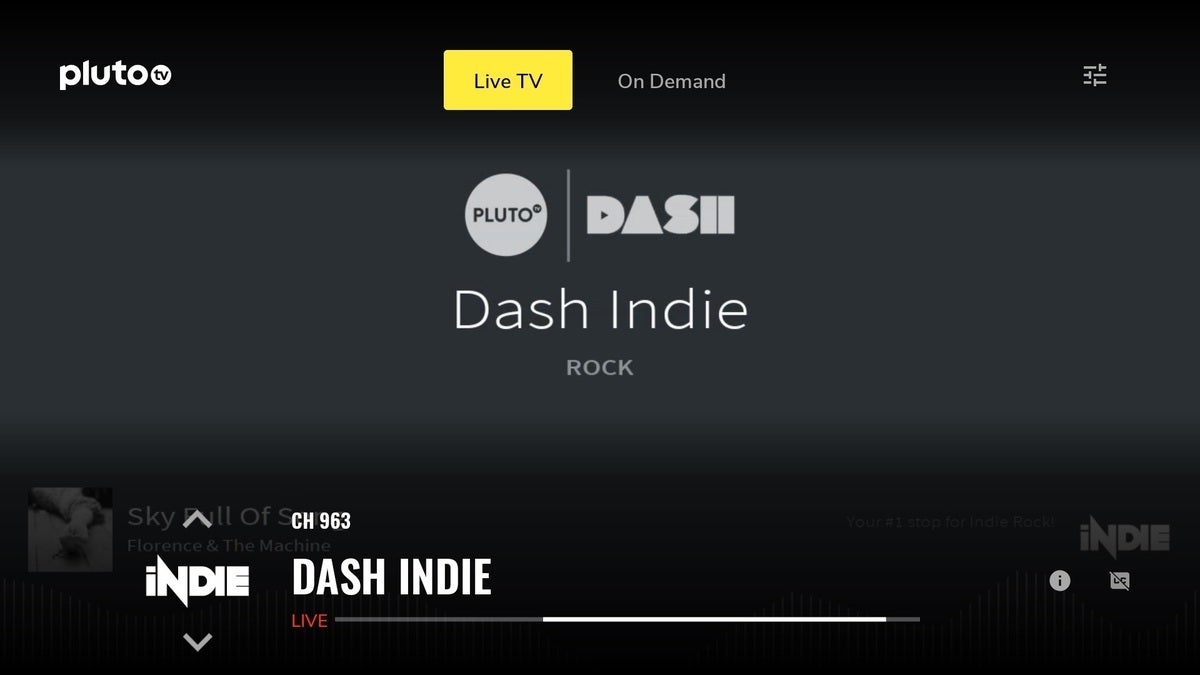 If Dash doesn’t have an app on your streaming device of choice, roughly 30 of its stations are also available through Pluto TV, a free streaming service that also provides a much broader range of linear video channels.

Pluto TV is available on pretty much every streaming platform, including ones that Dash doesn’t support natively, such as Android TV, Chromecast, Samsung TVs, PlayStation 4, and Xbox One. (You’ll also find it on Roku, Fire TV, and Apple TV.)

In addition to those internet radio stations, Pluto TV has four MTV-branded music video channels (Pluto is owned by ViacomCBS, which owns MTV) and a steady stream of pop videos from Vevo, but keep in mind those stations have commercials. 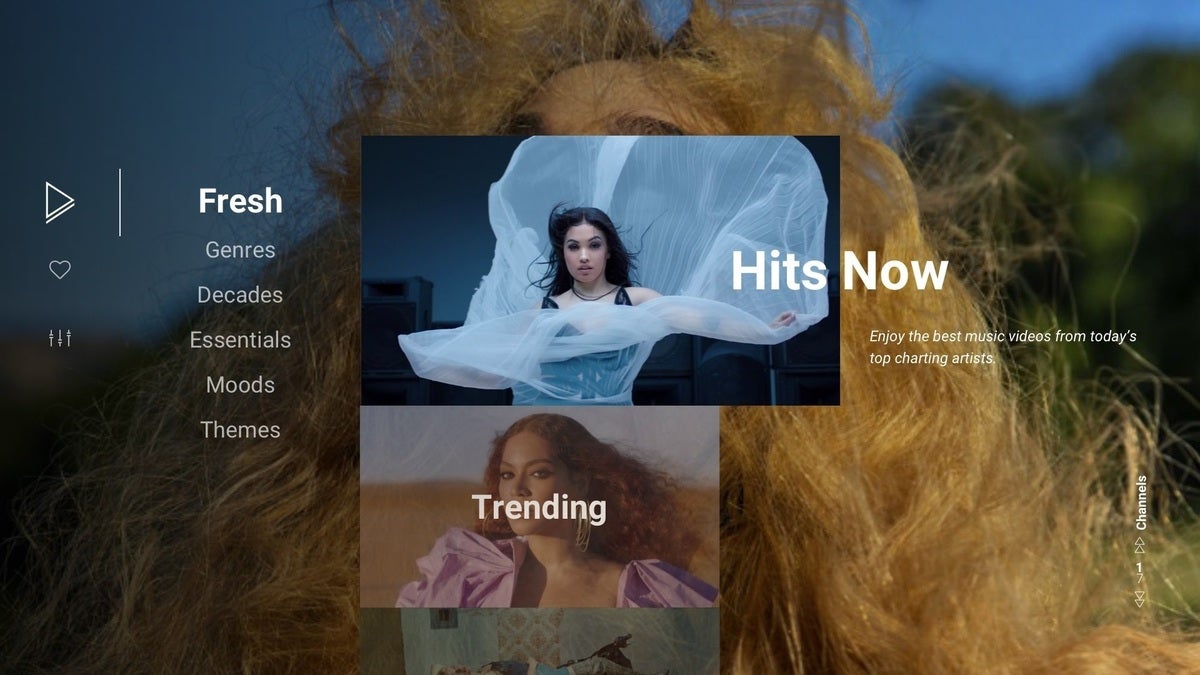 For a bigger selection of music videos than what Pluto TV offers, check out Xite. The free app is essentially internet radio for music videos, letting you choose between genres, decades, and moods. You can also “Like” videos for future reference and skip through videos you’re not enjoying. The Xite app is available on Roku, Fire TV, Apple TV, and Samsung TVs.

The free version of Xite does have commercials, along with limits on how frequently you can skip through videos. You can remove those limits and get search capabilities with a $5-per-month subscription. 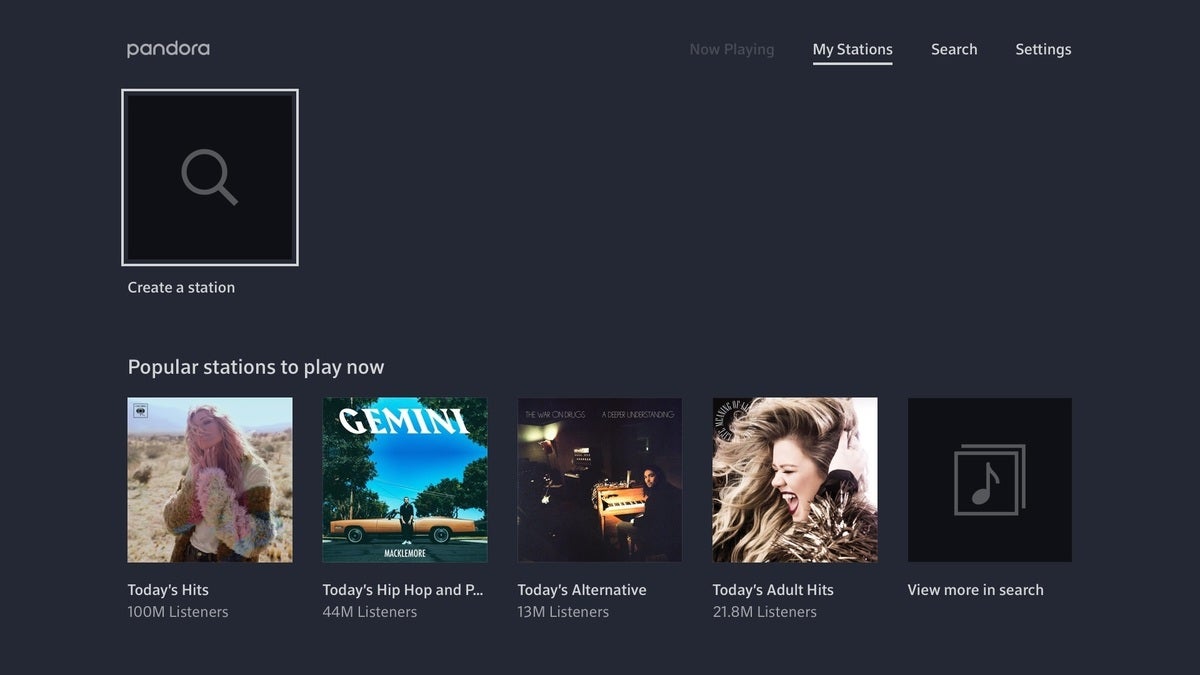 Although Pandora’s internet radio stations aren’t human-curated like Dash’s, they are a lot more customizable. Choose any artist or genre, and Pandora will generate a radio station on the fly. You can then personalize it by giving a thumbs up or thumbs down to each track that comes up. On certain Roku players, Amazon Fire TV devices, or Android TV devices, you can even use your remote’s voice control button to quickly launch a station.

The long-running service is free with ads, but you can remove them with a $5-per-month Plus subscription, which also lets you skip unlimited tracks. A $10-per-month Premium subscription lets you access the full music catalog on demand. The app is available on pretty much every streaming TV platform, including Roku, Amazon Fire TV, Apple TV, Android TV, and Chromecast. 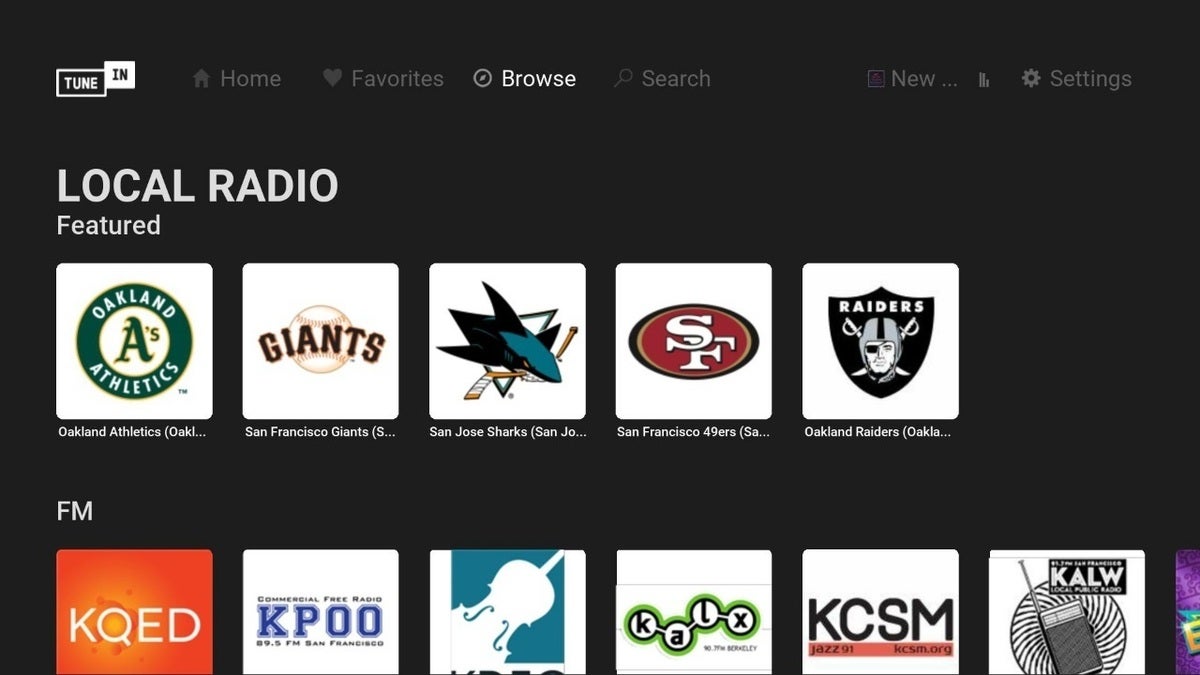 TuneIn is quite literally an internet radio service, in that you can use it to stream terrestrial FM and AM radio stations from around the world. It also offers its own branded stations for genres such as Jazz, R&B, and Hip Hop. The app is ad-supported, and removing them requires an $8-per-month Premium subscription.

The app is available on Roku, Amazon Fire TV, Android TV, and Chromecast. If your streaming device has a voice remote, you can launch stations by voice as well. 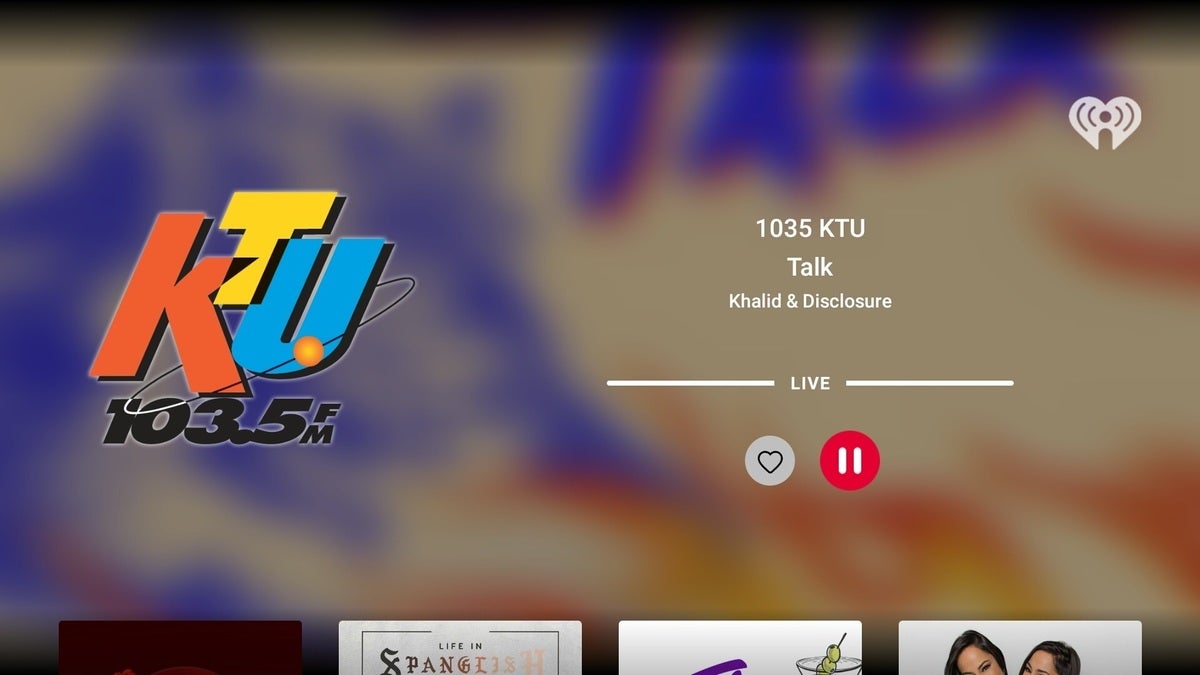 iHeartRadio is similar to TuneIn in that it offers terrestrial AM and FM radio stations (along with artist-based stations similar to Pandora), but with one important distinction: It’s available on Apple TV, which TuneIn doesn’t support. If you want to play the radio on Apple’s streaming box, this is your best option. 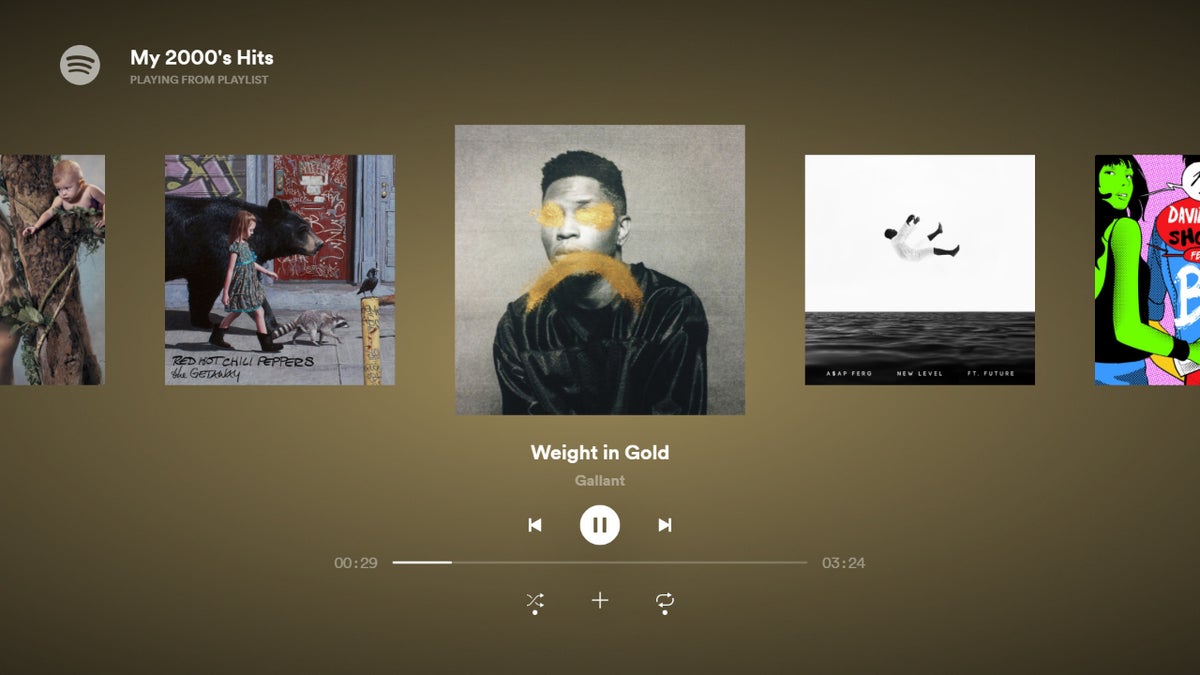 If you’re one of the 248 million people who already uses Spotify every month, you should also know that it’s available on streaming TV devices, including Roku, Amazon Fire TV, Apple TV, Android TV, and Chromecast. Even without a $10-per-month Premium subscription, you can listen to playlists on shuffle for free, and you can use voice commands for playback on Amazon Fire TV and Android TV devices.

Also worth noting: An anonymous user has compiled lengthy “Music Choice” playlists for Alternative, Classic Alternative, Adult Alternative, Retro Rock, and Smooth Jazz. I cannot verify whether these channels carry the same tracks as their actual Music Choice counterparts, but I can confirm that the jazz is extremely smooth. 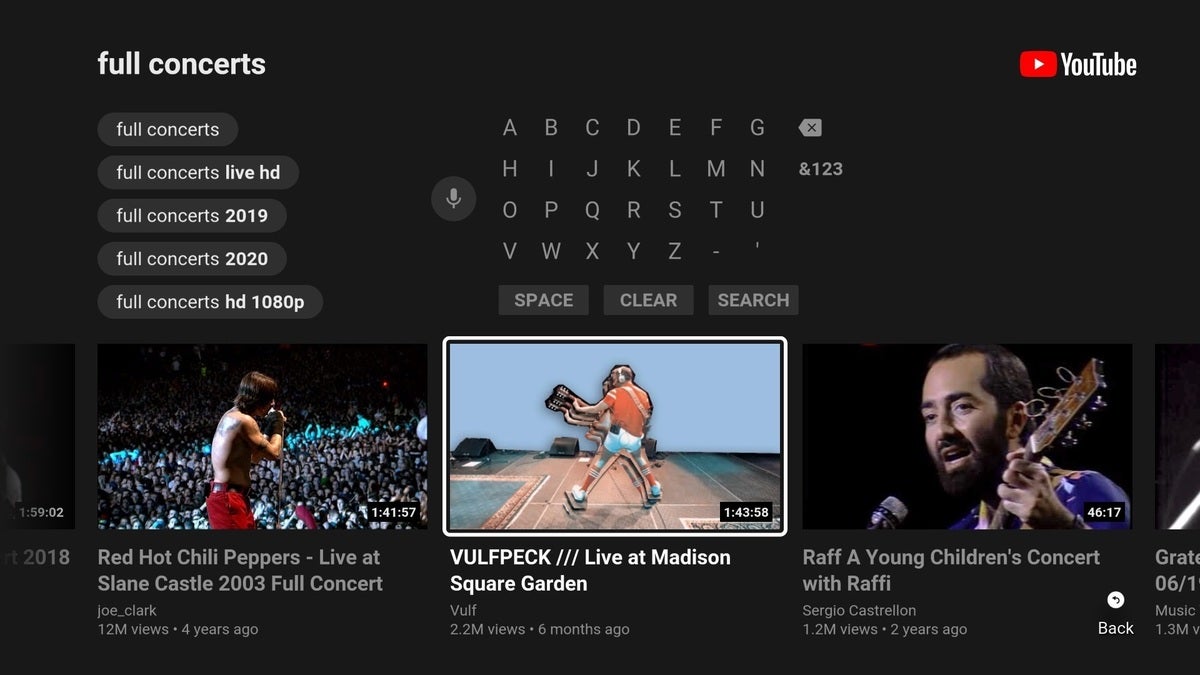 As long as we’re talking wildly popular streaming services, don’t forget about YouTube as a music source. The app, which is available on pretty much every streaming device and smart TV imaginable, offers countless music videos, live performances, and in some cases full albums. It’s not exactly “set it and forget it” like some dedicated streaming services—for that, there’s a separate YouTube Music app—but the catalog is unparalleled.

Of course, if you can stomach another subscription, there are plenty of other ways to play music on your TV. Apple Music is available on Apple TV and on Chromecast (from Android phones only). Tidal has an option for high-fidelity streaming on a wide range of devices. Amazon Prime Music is free for Prime subscribers, and provides a selection of ad-free tunes on Fire TV, Roku, and the Nvidia Shield TV. Stingray Qello is a subscription streaming service just for concerts.

In other words, cutting the cord gives you more music choices than ever.

Sign up for Jared’s Cord Cutter Weekly newsletter to get more cord-cutting news, insights, and deals delivered to your inbox.

Note: When you purchase something after clicking links in our articles, we may earn a small commission. Read our affiliate link policy for more details.