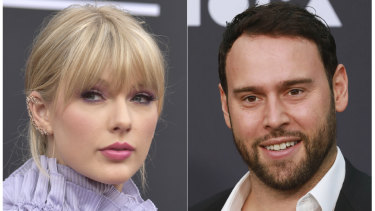 Though the idea had previously been floated on Swift’s behalf by no less than Kelly Clarkson, Swift publicly raised the possibility herself for the first time in a pre-taped interview with American show CBS Sunday Morning, set to air this weekend. In an excerpt released on Thursday, interviewer Tracy Smith asked if Swift had considered that option. “Oh yeah,” Swift said, according to the CBS transcript.

Smith followed up, “That’s a plan?,” to which Swift replied, “Yeah, absolutely.”

A representative for Swift declined to detail her intentions or answer questions about past contract stipulations. Universal Music declined to comment; Braun and Borchetta did not respond to questions. But this is how things might shake out should Swift choose to pursue such a drastic – if not unheard-of – move.

How could this be possible?

Music rights are infamously complicated, but owning the master recordings – the original copies of an artist’s work – and the associated copyright is not everything.

While the owner of a master typically has the ability to sell songs and albums, as well as license the recordings to movies, television and video games, there are separate rights for the composition itself, which is usually split among the songwriters. When a song is covered, for instance, the songwriters are compensated; when it is sampled from the original recording, both the songwriters and the owner of the master benefit.

In most standard recording contracts, labels retain ownership over masters in return for the investment they make in unproven artists in the form of recording, promotion and other expenditures.

But because Swift is credited as a lead writer across her entire catalogue – excluding some songs on her 2007 Christmas EP – she could essentially give herself permission to record “cover versions” of her own compositions without having to touch the masters owned by Big Machine and Braun.

What could stop her?

On the one hand, not many practical concerns, given that this is Taylor Swift, one of the most connected, wealthy and powerful people in the modern music industry. “She certainly has the money to be able to do this, which is always going to be an issue in this situation,” said Mark Tavern, a former major-label record executive and a professor of music business at LaGuardia Community College. “It’s one thing to make acoustic versions, it’s another to do a full pop production and make them competitive” with the originals, he added. 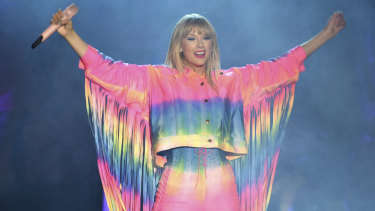 Swift, pictured here at Wango Tango in California in June, will be releasing her new album, Lover, this Friday. Credit:Invision

If Swift were to attempt a note-for-note recreation that could replace the old versions in loyal fans’ collections, she would probably need the support of her past collaborators, from co-writers on her early songs, like Liz Rose, to pop producers Max Martin, Shellback and Jack Antonoff. “That would be smoother and prevent backlash in public,” Tavern said, adding: “Each of those co-writers stands to make a tonne of money from any of those re-releases.”

Still, Swift’s past contracts with Big Machine, where she first signed as a teenager in 2005, could include language that would complicate things. Restrictions on re-recording songs have been common since the Everly Brothers put out fresh versions of past hits on a new label in the early 1960s, according to Tavern. Such terms typically bar artists from releasing re-recorded work for three to five years, or more, from its release. In Swift’s case, “We haven’t seen the contracts, but it’s pretty standard language in everyone’s contract,” Tavern said.

Swift’s first album on Big Machine, her self-titled debut, came out in 2006, while her most recent, Reputation, was released in 2017. In theory, should her contracts have time restrictions in place, she could begin releasing new versions on a rolling basis, starting at the beginning.

In an appearance on Good Morning America, Swift alluded to these contract restrictions more specifically: “My contract says that starting November 2020, so next year, I can record albums one through five all over again,” she said. “It’s next year, it’s right around the corner – I’m going to be busy, I’m excited.

“I think that artists deserve to own their work,” she added. “I just feel very passionately about that.”

Taking into consideration any restrictions, Swift could opt to re-record entire albums, or start with her most-played singles. Those updated versions might then be released in physical forms, as new merchandise, or be uploaded to streaming services alongside the originals, leaving listeners the choice of whether to listen to Love Story or, say, Love Story (2020 Version) on Spotify or Apple Music. (Via her publishing contracts as a songwriter, Swift could also urge anyone looking to license her songs in the future to take her new renditions instead of the Big Machine versions.)

Has anyone ever pulled this off before?

In addition to the Everly Brothers, various acts have gone down this path, or at least threatened to. Most famously, Prince vowed to re-record his entire catalogue while feuding with his label, Warner Bros., in the 1990s, but released only select tracks before reaching an agreement to gain ownership of his masters.

Pop singer Jojo went even further last year, releasing newly recorded versions of her first two albums, which were not available on streaming services, after her re-recording clauses ran out.

How serious is Swift about this?

She has yet to reveal more about her plans, but she has signaled that she means it. On Tumblr, where her most dedicated fans, known as Swifties, congregate, she has been known to boost fan theories and insights she agrees with.

After the CBS interview excerpt surfaced, Swift went on a “liking” spree, throwing her support behind breathless posts like “HAHAHAHAHA HE BOUGHT HER MASTERS FOR MILLIONS OF DOLLARS BEHIND HER BACK AND NOW SHES MAKING THEM WORTHLESS” and “I’m so freaking proud of Taylor controlling her life, accomplishments, work, her art, her story, and her life,” as another fan wrote. “THATS WHAT MY BABY DESERVES.”