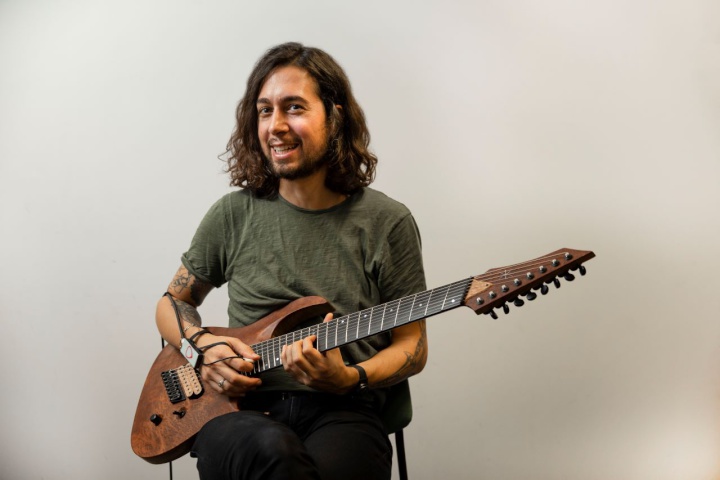 The technological changes
affecting most aspects of our lives typically generate as
much concern as enthusiasm, so what about the
music?

Innovative music has always been linked to
technology, but the pace of change is now so rapid it raises
some big questions. If the pleasure of art is in the way it
moves us in unexpected ways, what about music composed by an
algorithm?

Are our musical tastes being shaped by the
digital platforms from which we purchase music, and if so,
what does that mean for the future of music? Can we really
learn how to play an instrument from an app?

Understanding
how technology applies to music is an emerging area of both
research and teaching at the School of Music, University of
Auckland, and one which is being developed by lecturer and
coordinator of Music Technology, Dr Fabio Morreale, who
joined the School this year.
Dr Morreale did his BSc in
computer science at the University of Verona, Italy, but
began combining computer science and his own guitar-playing
interests at Masters level, and completed his PhD in
Human-Computer Interaction as applied to Music Technology at
the University of Trento, Italy.

One of the many
possibilities offered by technology is the creation of new
musical interfaces that allow for new ways of playing
traditional instruments.

While working as a Postdoctoral
Research Associate at Queen Mary University of London Dr
Morreale created the Magpick, a technologically-based guitar
pick that senses subtle movements of the hand and transmits
the signal to a pedal board, allowing for a much more
nuanced control of guitar sounds.

“Traditionally, guitar
sounds are created when you pluck and then release the
string,” he says. The sounds of the electric guitar can
also be manipulated with pedal boards, but that involves
using feet “and we don’t have a lot of dexterity in our
feet.”

“With the Magpick you can modify the sound of
the guitar, with subtle movements of your plucking hand
above the strings, without touching them.” It was so
popular with guitar players that he and his team considered
manufacturing it. “But we’re not really
entrepreneurially minded people.”

Dr Morreale notes that
technology has long been used in the production of music,
but is now increasingly used in composition, performance, in
musical analysis and music education.

He and Associate
Professor David Lines, Coordinator of Music Education, are
beginning a research project looking at the countless apps
that can be bought online which promise to teach people how
to play a musical instrument, quickly and easily, without
years of theory or practical learning.

Do they actually
work? We don’t yet know, says Dr Morreale. “They might
teach you to play the right note at the right time, but
that’s 5 percent of playing music. Maybe they will help
create an interest in a particular instrument, but will we
be able to use that to play a traditional
instrument?”

“I really feel that we need to find out
if they are an effective way of learning music,” he says.

Technology is also having a huge impact on what music we
are exposed to. Just as Amazon knows what we like to read as
well as we know ourselves, so Spotify knows what we might
want to listen to.

“But what is guiding their
recommendations for music? We don’t know, as they have
they own proprietary algorithms. Is it really based on your
musical taste? Or are they trying to push the artists of the
three largest music labels, Universal, Sony and Warner
Music, who are key stakeholders in Spotify?”

So many
questions. “That is why we need to study the impact of
technology on music and with a critical mind,” says Dr
Morreale. “We need to understand and design the future of
music, the way we listen, the way we compose, the way we
access it.”

Scoop. NZ’s comprehensive independent media resource for over 20 years. So that our news remains free to the public, all professional organisations must have a ScoopPro license (includes Pro news tools).