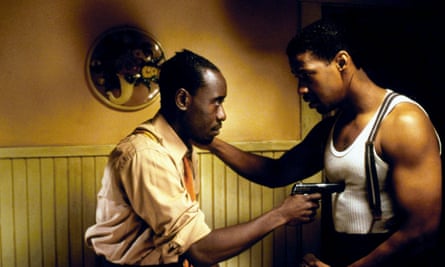 ’m with my wife, my son, Shareef, and my daughter, Karima, so there’s four in the house. We’ve got plenty of room to get away from each other, but enough common areas to hang out. How many TVs do we have? Too many.

I’ve been all over the place when it comes to films. I still love Devil in a Blue Dress with Denzel Washington and Se7en with Brad Pitt. I’m watching a lot of documentaries. I saw one on the Vietnam war. I was young when that war was going on, so I never understood the ins and outs and the pros and cons.

I’ve watched a lot of sports documentaries. The Last Dance with Michael Jordan on Netflix is great. He’s one of my heroes. It’s inspirational to watch an athlete at his highest level. It’s cool to see what was going on behind the scenes. It’s captivating.

Still on rotation … Devil in a Blue Dress. Photograph: Allstar/Tristar/Sportsphoto

When we first shot Boyz N the Hood, we took it to Cannes. I didn’t know if people were gonna care about how we grew up in South Central Los Angeles. It had French subtitles, so I didn’t know what to expect. But they really got into the movie. When people in France gave it a standing ovation, I knew it was a real movie that people cared about and it would last the test of time.

I’m not full steam into TV. I prefer to spend my time trying to create new stuff. I’ve got a lockdown beard that’s holding up. I’m staying busy. We just celebrated the 30th anniversary of my first solo record, AmeriKKKa’s Most Wanted. I spent a week putting up pictures and thinking of stories, and we did a listening party where I played the music and gave people a backstory of each track. It was cool to go that deep.

I do listen to my own music more than I watch my own films. When I watch a film, I’m picking out what I should have done, so I’m critiquing the movie more than I’m enjoying it. Who needs that? If I was gonna recommend my own stuff, there’s Boyz N the Hood, Next Friday, BarberShop, AmeriKKKa’s Most Wanted, Death Certificate and The Predator. Google me, man!