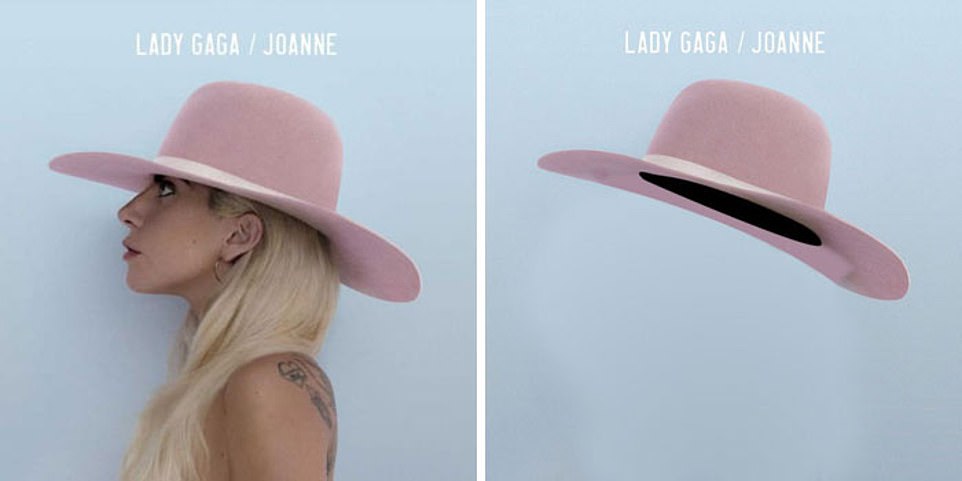 An Iranian music streaming website has come under fire for airbrushing women out of their own album covers – including the likes of Lady Gaga, Beyonce, and Taylor Swift.

Melovaz has altered numerous major album releases to remove images of women, in a decision which stems from the country’s strict Islamic law which has harsh restrictions on women’s self-expression.

The alternations have resulted in some rather bizarre images, including a man stood along on Lana Del Rey’s recent release Norman F****** Rockwell and a floating hat on Lady Gaga’s album Joanne.

The decision to remove women from album covers on the music streaming website Melovaz has resulted in some rather bizarre images, including this of a floating hat on Lady Gaga’s album Joanne. Women’s rights are greatly restricted in Iran, and it is illegal for women to be seen uncovered publicly 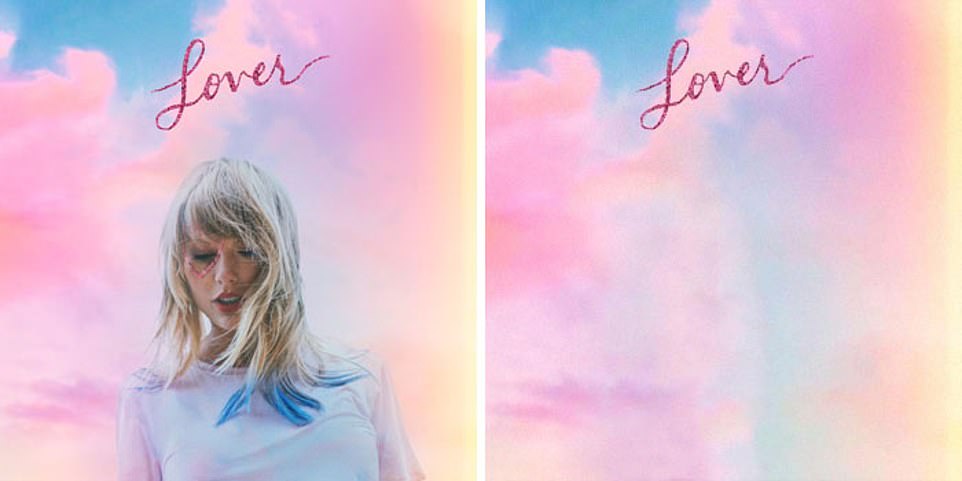 Taylor Swift was removed from her Lover album cover, leaving just a cloudy background with the album title. So strict are conditions on women in Iran that they are not allowed to attend sporting matches. Last month an Iranian women’s rights activist set herself on fire outside court to protest a six month jail sentence for trying to attend a football match. She later died from her injuries 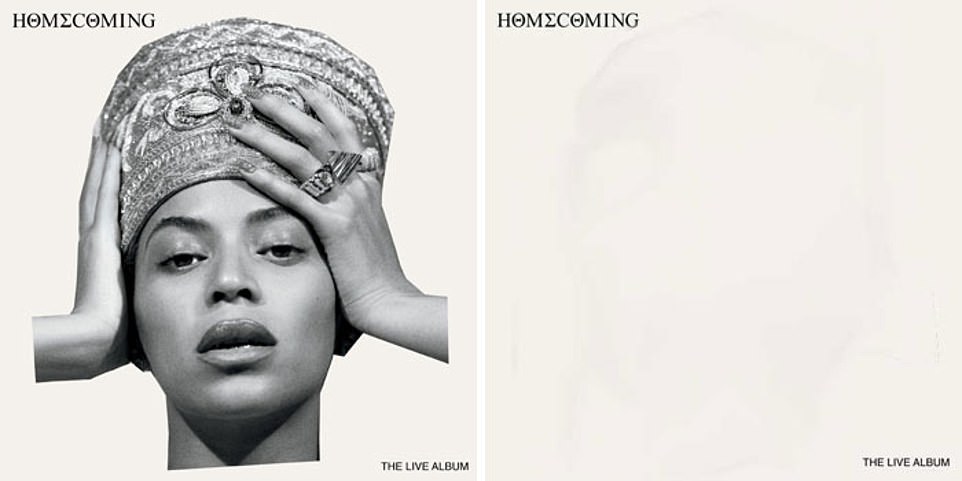 In this album cover, Beyonce has been entirely removed leaving just a blank background and the title. Images of the airbrushed covers have been doing the rounds on social media, with Twitter user @IzzRaifHarz one of the first to post about the edited covers across Melovaz. She said: ‘If you’re bored then you can try checking this music streaming site from Iran, they censored every female on music artwork like they don’t even exist. Search for your favourite female singers and see how they totally changed the covers’

The album from recent award-winning film A Star Is Born has also been altered, this time to remove Lady Gaga from the front. It leaves just Bradley Cooper playing the guitar alone, leaning on a strange smokey smudge where the 33-year-old female singer used to be. It is just one of a number of examples where the female singer is removed from the album cover while the male figure is left unaltered

Ariana Grande – Thank U, Next 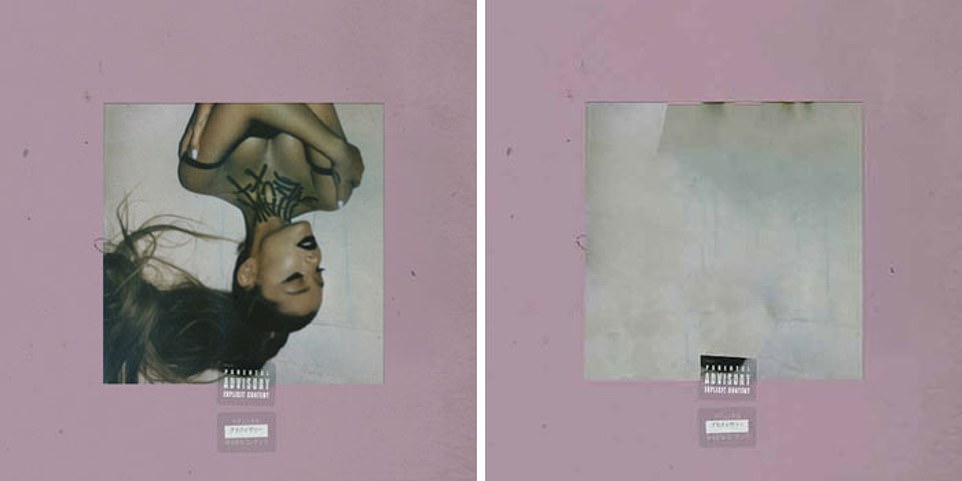 In another album cover, Ariana Grande has been entirely removed from the artwork for Thank U, Next. All that is left is a grey square with a pink border. In the country it is illegal under most circumstances for a woman to be seen uncovered. In this case, it appears the law has been applied to women who don’t outwardly practice Islam, and aren’t physically in the country 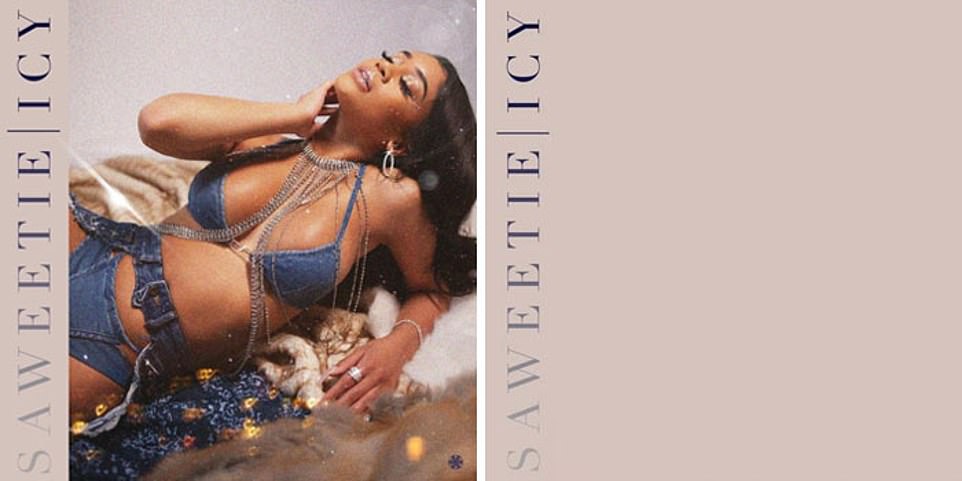 Iggy Azalea has also been removed from her album cover. The alterations have led to some artists to hit out at the removal of their image, including rapper Iggy Azalea, who tweeted after the backlash: ‘The jokes on them cause I put a vagina reference in every song so who really won’. Her tweet highlights the site’s conflicting policy on images and the use of words featured in the songs 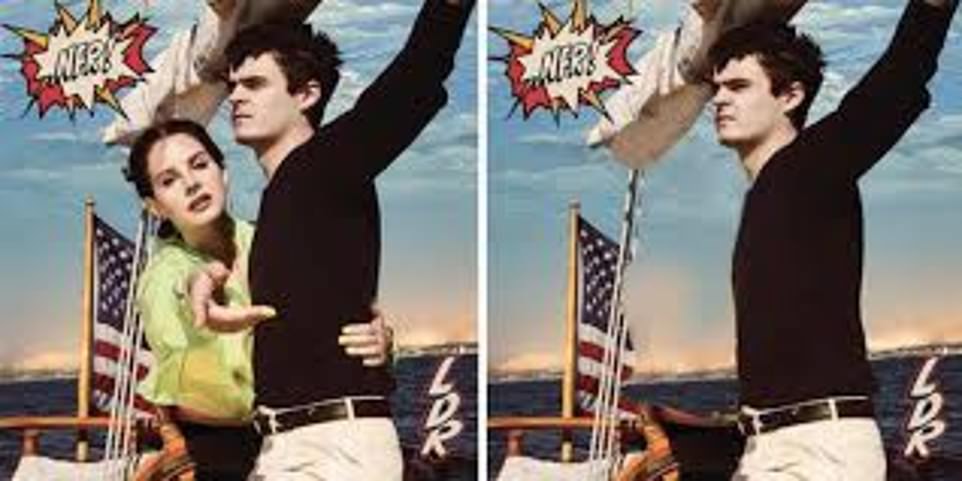 Elsewhere, Lana Del Rey has been entirely removed from her album cover Norman F****** Rockwell. The alterations leave a male figure standing alone in an unusual pose and part of the US flag also missing.  Melovaz describes itself as featuring the ‘best albums, free download playlists’ and genres including ‘rock’ and ‘country’ 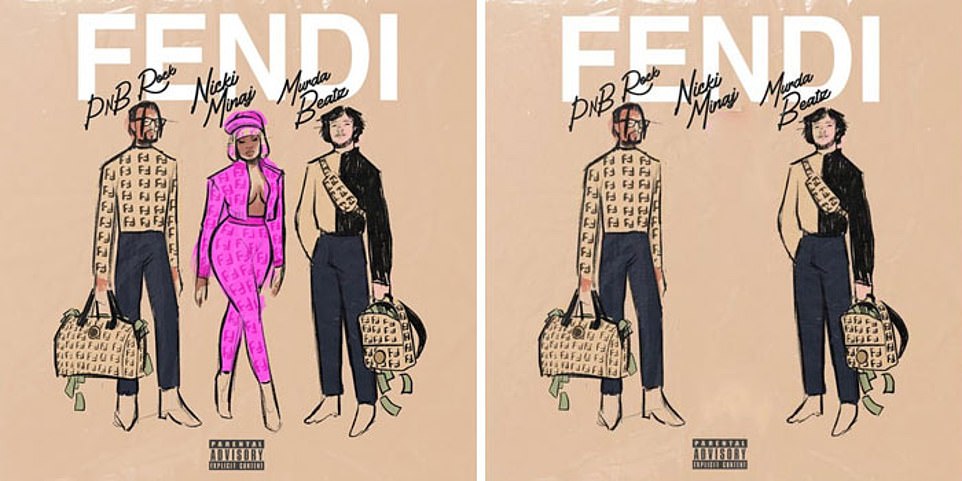 So harsh are the Iranian website’s conditions – which stem from the country’s strict Islamic law, with harsh restrictions on women’s self-expression – that even a sketch of Nicki Minaj was removed. Even the cover art for playlists, which Melovaz appears to take from Spotify, have been altered 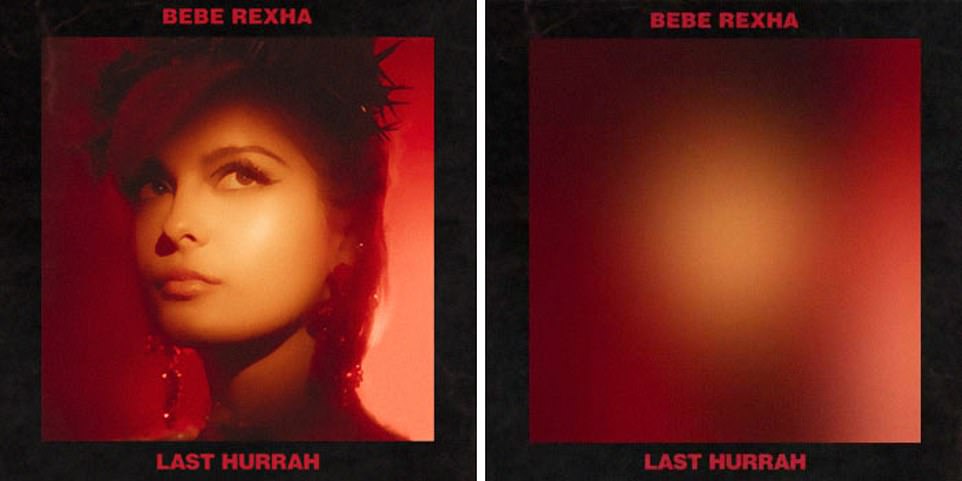 Much like Iggy Azalea, Bebe Rexha has been entirely removed from her album Last Hurrah. All that is left on the album cover is a red background. Melovaz has not yet made any public comment about its decision to remove women from album covers. And at the time of writing, the airbrushed album covers remained visible on the streaming website 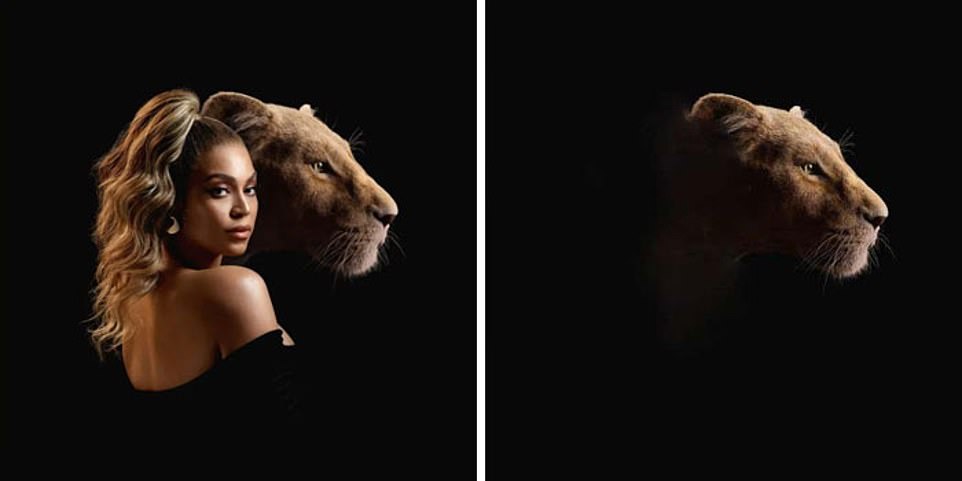 Other unusual album covers have resulted in lone figures appearing on album covers after the companion is airbrushed out. In this one of Beyoncé and the character she plays in The Lion King, Nala, the animated creature is left alone on a black background. Nala befriends Simba as a young cub, and later becomes his partner as he fights against his evil uncle Scar 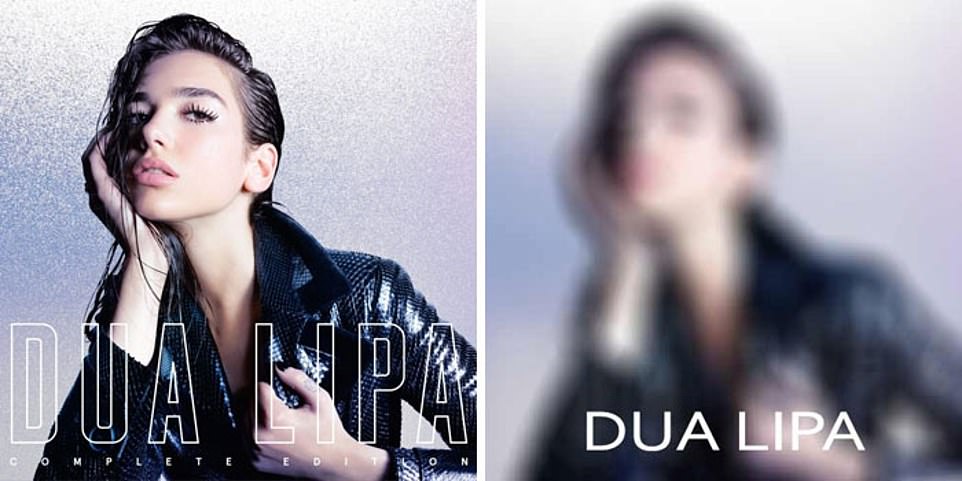 Dua Lipa hasn’t been entirely removed from her album cover. Instead she’s simply blurred out. In this case, the text used for the title of her album has also been altered. It has been made smaller, and the words ‘complete edition’ also removed. Culture news account Pop Crave has also posted about the alterations, saying: ‘Fan bases on Twitter are reacting to Iranian music streaming platform censoring women from album/single covers’ 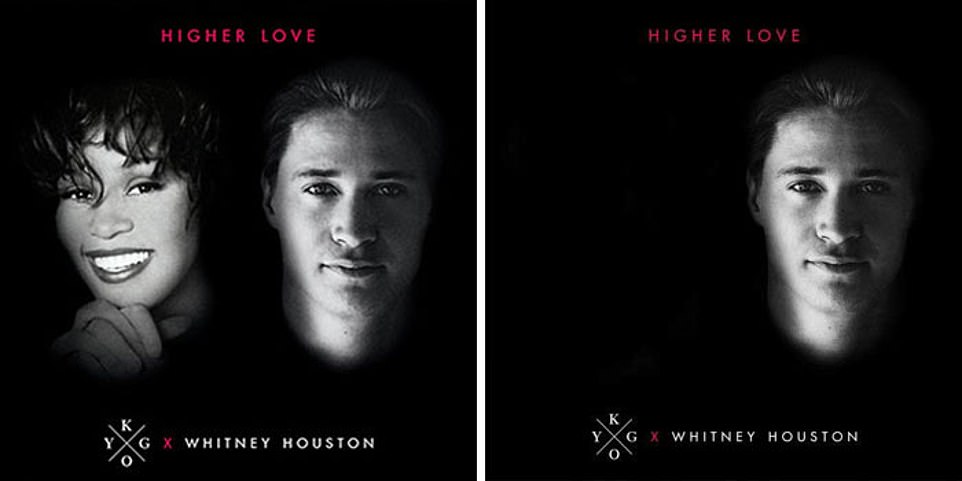 Kygo is left alone on the album cover for Whitney Houston’s single Higher Love. Dozens have taken to social media to comment on the alterations. A tweet about the alterations has been shared almost 5,000 times

Billie Eilish – When We All Fall Asleep, Where Do We Go? 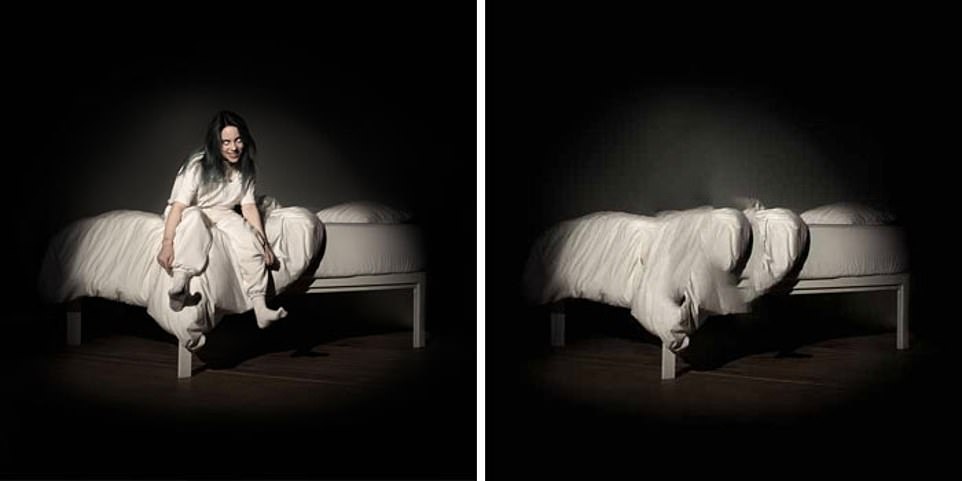 The album cover for Billie Eilish’s debut album When We All Fall Asleep, Where Do We Go? features just a single bed. Music streaming website Melovaz altered the cover to remove the singer entirely. Commenting on Twitter, one user said: ‘So there’s this Iranian music streaming site that’s just for the lack of a better term, literally erasing women off their album art. Idk maybe some of these look a little off’ 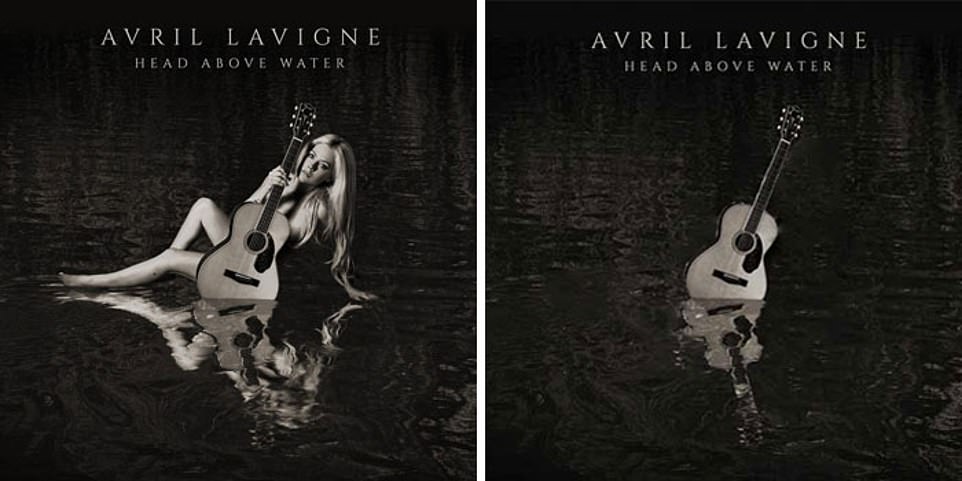 For Avril Lavigne’s album Head Above Water, a guitar is seemingly left floating in water after the person holding it – the 35-year-old singer – is erased from the album cover. Others have called for a public statement on the removal of women from the images. Writing on Twitter, one user said: ‘I would appreciate your public statement regarding the removal of female artists of their album covers by the streaming service Melovaz’ 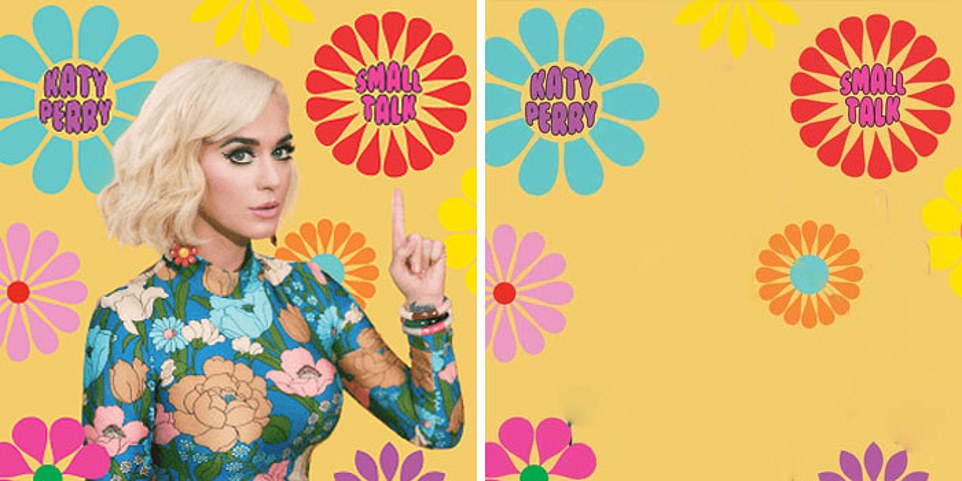 Only flowers are left on Katy Perry’s album small talk, after she’s removed from image. Some have reacted with amusement at the now bizarre album covers, with one saying: ‘Iran removing females from their single/album covers is the funniest thing I saw today.’ Another said: ‘The Joanne cover is ending me omg I literally can’t breathe’ 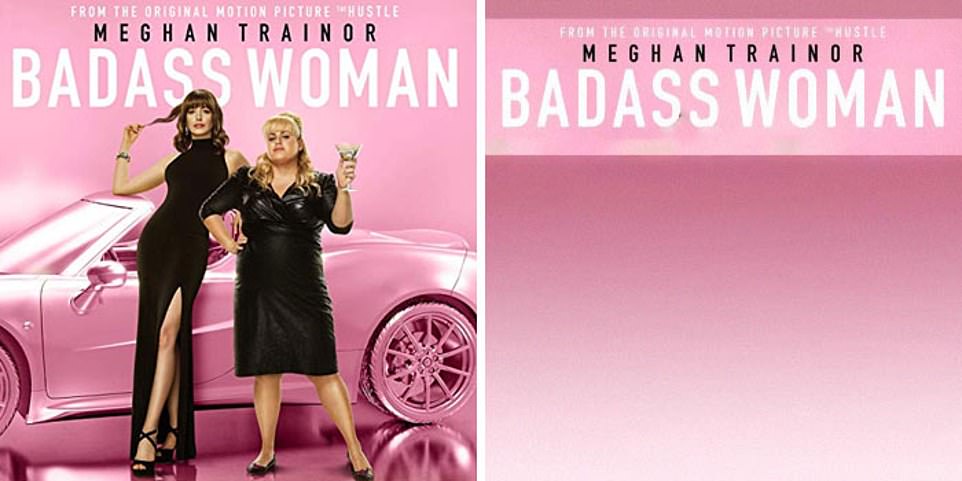 The person behind this airbrushing attempt decided to remove the whole bottom half of the cover. Not only were Anne Hathaway and Rebel Wilson removed from the cover – but also the car behind them. Both didn’t even feature in the song, just Meghan Trainor who did not appear on the cover