For sheer gig opportunities, none can touch Isol-Aid, the rolling Instagram festival that lines up scores of performers in 20-minute bursts each weekend. Booker Emily Ulman cites an “enormous amount of money” raised for industry charity Support Act, though she says community connection is the key success indicator.

These are mere drops of sustenance, of course, in a suddenly dry ecosystem. In this brutally transformed marketplace, questions swirl about what gives live streaming legs and whether the frantic learning curve has fast-tracked the phenomenon to a permanent place in our diaries.

For Delivered Live producer Leigh Treweek, “the most important thing is sound quality. It’s been difficult for artists because they’re so used to being able to sit there and listen and know what’s happening in the room.

“With live streaming, you have to consider people watching on the big-screen TV at home, turning it up and the quality’s there. We spent a lot of time getting that right, perfecting the technology.”

Simon Myers of St Kilda’s Memo Music Hall is chasing the same ideal. His previous years in TV gave him a weird “back to the future” vibe, where “it doesn’t matter what’s going on on the stage. What’s important is what’s happening on that little monitor.”

HTH Studio, after a clean.

Memo’s Live Stream Series is one of the few that insist viewers pay: their catchphrase is “music has value, so let’s value it”. In return, the high-grade armchair experience involves five cameras and some performer education.

“We’re making sure we’re talking to the musicians beforehand: ‘Look, that camera there, that’s your audience … there’s no applause so you can’t have too much of a break between songs …’ They’re very nervous to start off, but once they finish they’re on a high.”

It’s a far cry from the clunky-but-intimate phone-cam connection of Isol-Aid or The Lounge Room Sessions. But all share the value of real-time communion.

Mushroom’s Sate of Music series, sponsored for six episodes by the Victorian government, instead opted for a largely pre-filmed format to short-circuit inevitable glitches in front of an eventual audience of some two million.

“We wanted quality produced content and we wanted to be able to get multiple artists to come together,” says creative director Tom Macdonald. Given time-lag and buffering, pre-recording remains the only way for Abby Dobson, Ngaiire and Paul Dempsey to harmonise from a distance. 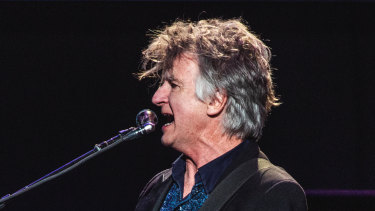 With everyone from Neil Finn (above) to the Berlin Philharmonic vying for bandwidth and eyeballs, the streaming market is clearly in floodCredit:Rick Clifford

But can that content stand out in the ocean of permanently available online video?

“If you want to get people to stay on the live stream, you have to engage them in real time,” Macdonald says. “We’ve done things like live Q&As where viewers can be a part of the moment … If you’re just putting content that’s pre-recorded into the stream … it’s easy for people’s attention spans to jump.”

With everyone from Neil Finn to the Berlin Philharmonic vying for bandwidth and eyeballs, the streaming market is clearly in flood. The Lounge Room Sessions plans to scale back soon. The similarly named LoungeRoom Live company lasted just one weekend in April, when an ambitious Festival Hall set-up proved “unviable”. Plans are afoot to relaunch elsewhere, when real-life payers are allowed on the premises.

Most parties believe live streaming can continue to flourish, even as punters return to venues, despite the fierce online competition for eyeballs and clicks. They’ve learnt that a vast, forgotten audience has always existed, beyond the sightlines of the stage.

“It might be the tyranny of distance or mental health or disability or financial disadvantage or family commitments,” says Leigh Treweek, “but we’re getting [feedback] from a huge number of people who are getting access to music that they didn’t have before.”

Emily Ulman agrees: “There will always be barriers − physical, psychological, geographical − and these things should not be impediments to enjoying music.”

Michael Dwyer is an arts and music writer