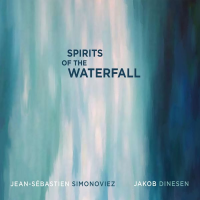 Saying that a piece of music is lyrical presupposes a quality that is hard to define. You know what it is until you need to explain it. The Cambridge Dictionary says that it means: “expressing personal thoughts and feelings in a beautiful way,” which doesn’t really say much. In music, storytelling is just as elusive. It’s easy when you tell a story through words, but musical storytelling without words is hard to define. Perhaps it will do to say that it is a narrative movement where each musical line is part of a greater trajectory. A musical story is not a flat line, but a subtle string of emotional movements. Combined, lyrical music and storytelling give the music a specific quality. Whereas the lyrical quality tends to focus on the beauty of the tone itself, storytelling is interested in the emotional space that is created between several tones. The following three releases are all works that could be characterized as lyrical storytelling.

2019 has been a busy year for Danish saxophonist Jakob Dinesen. He has already released the ambitious double album Keys & Strings (Stunt Records, 2019) and Spirits of the Waterfall is his second release this year. In many ways, it is the pared down yin to the multiple-voiced yang of Keys & Strings. If the latter was an exercise in creating a lush landscape with many different musical voices, the former focuses on the conversation between two instruments.

Spirits of the Waterfall is a meeting between Dinesen and the French pianist Jean-Sebastian Simonoviez where they weave intimate lyrical stories together. Dinesen’s homage to the late Danish bassist and composer Nicolai Munch-Hansen , “Nicolai Smuk,” can be found on both albums. On Keys & Strings, the lovely melody is lifted by light swirling strings, but on Spirits of the Waterfall the tempo is slower and more elegiacally introvert as Dinesen carves his way into the melody spurred by the glistening tones and deep dark chords of Simonoviez.

There is also a dialog between the two albums on another level. Keys & Strings included the standard “Spring Is Here” and Spirits of the Waterfall answers with “Here’s That Rainy Day,” underlining the blue melancholy mood of the album.

The title of the closing track, “Running Whispers,” is perhaps the best way of describing the music on this album. The tactile whisperings of the instruments are lyrical and yet there are narrative threads of running melodic lines that form lucid patterns of musical meaning. 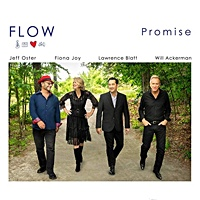 Promise marks the welcome return of FLOW that released its acclaimed self-titled debut in 2017. Behind the name lies the talents of trumpeter Jeff Oster, singer and pianist Fiona Joy Hawkins and guitarists Will Ackerman and Lawrence Blatt. On their second album, they continue to refine the signature sound they introduced on the debut.

The title track is a supreme example of how the group works with dynamics in the music, adding and subtracting instrumental layers while increasing or slowing down the tempo from the tactile touch of a single instrument to the lush palette of musical colors. Whether finding beauty in the stroke of a single chord or the motivic development of lines, FLOW create complex lyrical stories that are also remarkably intuitive. It’s this paradox that makes the music so compelling combined with the fact that the group don’t settle into fixed patterns.

Instead, hearing this music is like experiencing how different pieces of a puzzle fall remarkably into place. Who would have thought that the hushed piano chords of “Last Light” would develop into the joyfully clear trumpet lines driven by guitar and propulsive percussion? It’s like following the rise of a morning mist into the sunlight accompanied by Fiona Joy’s ethereal wordless vocals.

With their second album, FLOW has certainly delivered on their Promise. The group is no longer a promising project by four established musicians, but an organic unit with its own aesthetic that has lyricism and storytelling in the center. 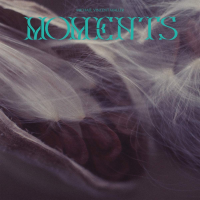 The lyrical storytelling of Jakob Dinesen and Jean-Sebastian Simonoviez takes place as a dialog and FLOW refines the subtle shifts of musical conversation in the language of a group, but composer Michael Vincent Waller leaves it in the capable hands of pianist R. Andrew Lee and vibraphonist William Winant to perform his lyrical soliloquys. Moments is a refined collection of music with two suites of four tracks each and ten single pieces.

The superb liner notes written by Tim Rutherford-Johnson and “Blue” Gene Tyranny provide the perfect entry point into Waller’s universe that is influenced by the pointillistic poetry of Erik Satie but has its own emotional poignancy and aesthetic. As Rutherford-Johnson writes:

We can think of the duality of the piano’s (and vibraphone’s) sound as two different forms of gravity: striking and sinking. The former -the origin of melodies, harmonies and rhythms -has for centuries been the basis of the piano’s place in Western classical music. They are certainly present here too and Waller draws on that tradition in its most archetypical forms through its use of modal melodies, triadic harmonies and metered rhythms. Yet the emotional heart of his music is not in attack, but resonance, The afterlife of sounds.

The resonance comes through not only in the lingering notes and pauses, but also in the emotional memory that is reflected in the titles like the opening track “For Papa” and the suite “Return from L.A.” The music unfolds like emotional stories that carry the lyrical resonance of time lost and found.

Spirits of the Waterfall