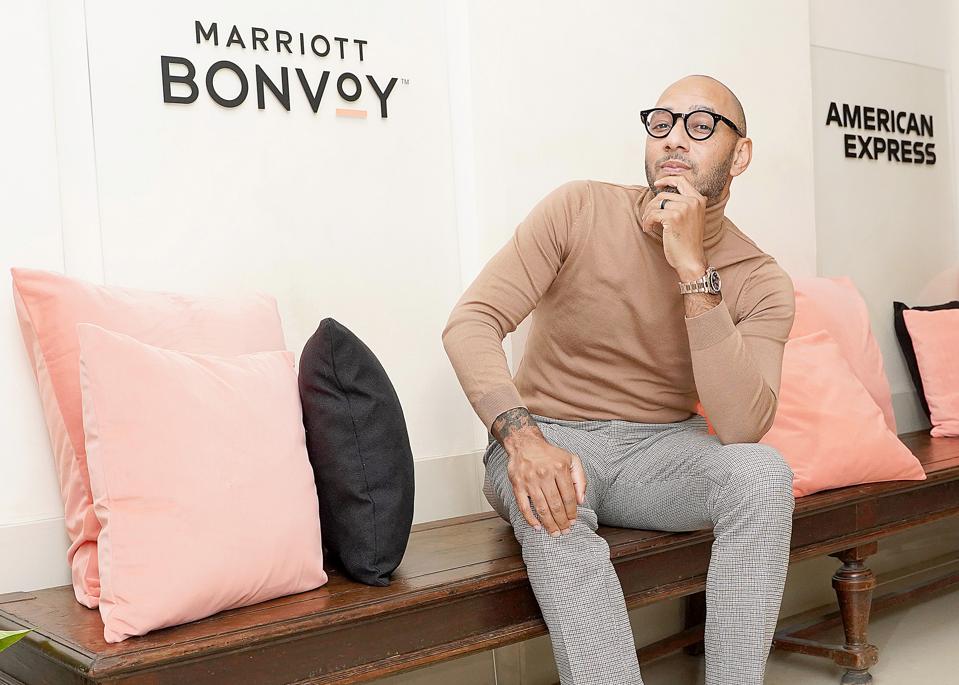 One of the most acclaimed music producers in the game, Kasseem Dean, better known as Swizz Beatz, has worked with Jay-Z, L.L. Cool J, Busta Rhymes and many more, including his wife Alicia Keys,

But when I jump on the phone on a recent Monday with the producer the talk is focused squarely on his art collection and love of art. Joining a long line of great musicians, from Joni Mitchell and Bob Dylan to John Mellencamp and Serj Tankian, who express themselves both musically and visually, Dean is an avid art lover who has turned that into a second career.

In addition to his own paintings, he has become an avid collector, known for his Dean Collection, and, more importantly, his support of fellow artists in endeavors like No Commission, where the artists keep 100 percent of their sales, and he and Keys are opening in the future an arts campus in Upstate New York.

He has come a long way from not feeling comfortable in the art world, which he tells me was how he first fel. I spoke with Dean about his love of art, why art and music are “brothers and sisters” and his art plans.

Steve Baltin: Talk about how music and art fuse together for you and keep both worlds fresh and vital for you.

Kasseem Dean: Music and art are brothers and sisters since day one. And they always spoke to me and through me and I think they always spoke to and through everyone as well. But the businesses made them feel like a separate thing. At the end of the day it’s all art. Name one musical color that didn’t include art and name one artist today you venture doesn’t listen to music. They always went together. And using both of those brothers and sisters to fuel education, positivity, entry points in the world I think is amazing.

Baltin: But not everybody processes art through both auditory and visual means. So when did you figure out you could do both?

Dean: Well I definitely felt comfortable in the music world (laughs). I didn’t feel real comfortable in the art world. I didn’t really know the art world. I just was always a fan of art because I was always around it growing up in the Bronx. But as I grew to learn more about the market, the space and the culture, it became real fascinating to me on how I could participate in both sides and almost have two different lives. I definitely have an art crowd and I definitely have a music crowd and they’re just now merging. When I announced that I was doing art over 20 something years ago it wasn’t the cool thing to do and be involved in music, which is the reason I always kept it to myself. So as I got older and started collecting more I thought, “Wait a minute, I shouldn’t be holding back that I collect art. It’s something amazing and other people should try it as well.” I was painting at that time also, which was like my therapy. Painting was my therapy. And then it just all kept going from that point on.

Baltin: Talk about how with the Dean Collection and the art center you’re opening up art to people who might not be otherwise exposed to it.

Dean: One hundred percent. And that’s why it was important for us dealing with No Commission to create some kind of entry point, which became a vital entry point, especially when we noticed 30 percent of the sales were new buyers. It was like, “Wow, this is an entry point and what we’re doing is effective.” My conversation used to always be about music. Now I’m getting conversations from musicians about art and how to advise them. Even today I’m curating artists that no one would expect [to have] collection just because he’s seen different things we have going on and there’s an entry point. And there’s someone you can relate to that’s actually giving you the information, that you could trust. So all of those things are important because as much as we bring those worlds together and be able to have a maiden conversation to move them forward I think the creative world would be a better place. Art and music shouldn’t be as separated as it is.

Baltin: As your collection has grown and you have gotten more comfortable talk about the things you have learned that have most pleasantly surprised you. Especially when you teach you learn as well.

Dean: Absolutely. I think what I learned was mainly to have patience with the process. And that’s been the hardest thing I’ve been trying to show a lot of my peers or a lot of people that are interested and want to get the quick fix. There’s no way to get a quick fix in art that’s genuine. I used to collect like that. I used to think that I had a quite fix, but it was just for the hype. That didn’t really mean anything. Yeah they were great pieces at that time. But I feel that I have more fun discovering and finding artists right before that I wouldn’t have even known were going to go to the levels where they’re at today. And actually being their friends and going on that ride with them, rather than waiting for them to get to their peak and then all of a sudden I’m the best friend. So I learned that having patience and actually missing out on a couple of deals and artists it actually helped me. Like this year I didn’t really buy as much as I wanted to or I would have but I thought, “Let me sit back and digest what I have and build an amazing plan and speak with my wife and figure out how we can push this even more forward as we still support.” So that’s where the campus came up, Like, “We can buy paintings all day, but we need to create an institution that’s going to be able to plug things in.” And we still can collect and we’re still gonna support. But it was just like make that focus something that’s more zeroed in. We have enough works already now to take time out and build something spectacular.

Baltin: And how did you pick Upstate New York for the campus?

Dean: I just wanted to have space. Artists need space. We need space to do many things we want to do, whether we want to shoot a movie up there, whether we want to have the museum up there and I feel the further we went out the more we would be able to get. And I also felt like having a destination was key. So that when people come there they’re actually coming to be there and our whole thing is if we build it well and it’s amazing, people will come. I think it should be a safe zone for creative and surrounding are not distracting. And it’ll be a long time before we can outgrow the property. It’s one thing to get something going and then you gotta start all over because you’ve outgrown the property, So my thing was, “Let’s get as much space as possible and take our time and do it well, have the best people that we can find being a part of it and running it with us.” And that’s really the goal. To leave a legacy piece behind. Or it’s to start a model that can go around the world because we’re thinking globally. I feel we’ll have a lot of people coming from around the world to be there.

Baltin: Tell me about your Creative Minds talk with Kehinde Wiley in Miami December 2.

Dean: Kehinde was the first major artist to sign up for No Commission. Nobody on that level really understood what it was. We wanted to do an event that was celebrating the artists and let them keep 100 percent. He found nothing wrong with that, although he was advised time and time again he shouldn’t be a part of it. I’m happy to be part of Creative Minds with all of the proceeds going towards what he’s doing now at Black Rock. Me and my wife were at the opening. It’s amazing to see artists start to get on this level of thinking, opening up a different creative hub.