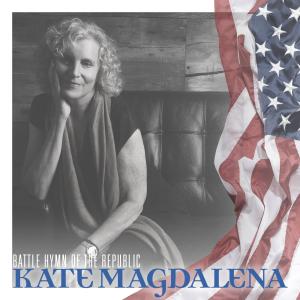 A Hallelujah To Heal and Unite this July 4th

The hymn sings “Glory Hallelujah” in the midst of our nation’s great conflicts.”

SAN FRANCISCO, CA, UNITED STATES, June 28, 2019 — San Francisco-based singer/songwriter and recording artist Kate Magdalena releases a soaring new take on the traditional Civil War ballad, the “Battle Hymn of the Republic.” The hymn sings “Glory Hallelujah” in the midst of our nation’s great conflicts, such as were witnessed during the Civil War, and again today as our country struggles to unite under a common vision of what it means to be American. The lyrics were written in 1861 by Julia Ward Howe to fit the tune of “John Brown’s Body.” Since that time, the song has evoked and expressed sentiments of real patriotism, as well as religious fervor. Kate took a liking to the song when she first heard it powerfully sung by Judy Garland to honor President Kennedy as the nation grieved his death. She hopes now to rekindle it as an inspiration for America today, as the nation prepares to celebrate the July 4th holiday.

“Battle Hymn of the Republic” is the third track from Kate’s upcoming album “A Larger Dance” which is set to release in September 2019. To date she has released “Take Me to Church,” by Irish singer Sinead O’Connor on country radio stations across the United States, as well as “Be the Lark,” an original. In July she will release “The Streets of Any Town,” a song dedicated to the plight of the nation’s homeless men and women. These songs have been recorded and produced by GRAMMY-nominated-producer Billy Smiley (Johnny Cash, Whiteheart, Clay Aiken, and the Newsboys). “Battle Hymn” features some of Nashville’s finest musicians with Fred Eltringham (The Wallflowers and Sheryl Crow), Byron House (Robert Plant and the Band of Joy), Blair Masters (Garth Brooks) and Brennan Smiley (The Technicolors).

ABOUT KATE MAGDALENA:
For Kate, singing is a way to bring what is inside, outside. It is to make the invisible audible. “It can change minds and soften hearts. I believe that music is part of every cell of the human body; and that we can use music to reach others in ways words cannot.” Kate has an ability to move her listeners with her voice, to bring pleasure and joy. Her songwriting began through her poetry writing, and by setting a few poems to music by great poets like W.B. Yeats and Robert Frost, and then in discovering a love of writing which came from her own heart. She has always been a singer, but it is only now that she is putting her music first professionally, after a career as a teacher and chaplain.

Kate was raised in an era in which people looked to the arts and music to inspire social activism. Like Dylan’s great songs, Kate’s music addresses some of the pressing issues of our own day. She hopes that in pursuing her own dream later in life, that she might inspire others to follow their dreams.