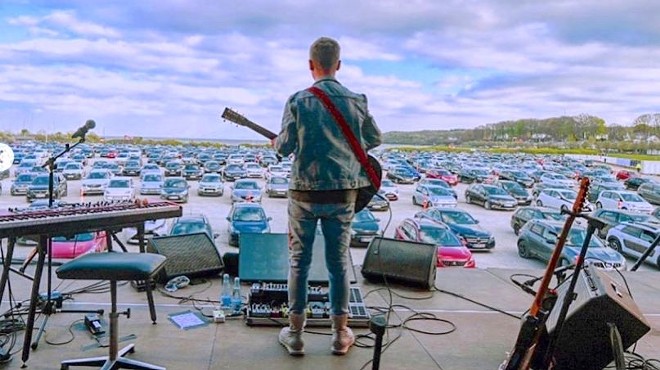 VIA DRIVE IN STL Could this be the future of live music in St. Louis?
This past Monday, America got a glimpse into what the live music experience will look like for the foreseeable future as a venue in Arkansas hosted the nation’s first “socially distant concert” featuring a performance by country-rock artist Travis McCready. Suffice it to say, it is very different from what we’re all used to.

A mid-sized venue operating at 20 percent capacity. Masks required for everyone in the building. Caution tape blocking off rows of seats. A limit on the number of people allowed in the bathroom at one time.

All told, the look into music fans’ collective near-future was sobering. Across social media many expressed dismay, with some saying they’d rather opt out of seeing live music altogether until the restrictions were lifted.

But even as people lamented the new normal, here in St. Louis, another version of the COVID-19 show-going experience was already in the works: drive-in concerts.

Starting tonight, the parking lot of the closed St. Louis Outlet Mall (5555 St. Louis Mills Boulevard, Hazelwood) will play host to live music, as well as some movies, all for the enjoyment of attendees seated in their own cars and on lawn chairs in adjacent parking spaces. The lot has been transformed with a huge stage and five LED jumbotron screens, and music will be pumped through an FM transmitter into the car stereos of all in attendance, as well as through a PA system on the stage.

It’s part of a schedule of movie and music nights that will run through June 6. Local cover and tribute acts such as Superjam, Dance Floor Riot and Petty Cash Junction will perform before showings of classic films such as Fast Times at Ridgemont High, Purple Rain and Dazed and Confused.

The origins of the idea were simple enough. Dan Buck, managing partner for Big Sports Properties, which operates the burgeoning Powerplex youth sports facility in the former mall, was working with Paul Brown, senior marketing director with Brought2U Media, when the two had an idea.

“We were looking at the big huge empty parking lot at this old mall and said, ‘What can we do with this space?” Brown tells RFT. “We got plenty of social distancing opportunity here. So the thought was, ‘Let’s create a venue and see if we can have some high school graduations.’ That was the impetus.”

Considering the huge number of graduates who missed out on their end-of-the-year experiences due to the coronavirus, it turned out to be a great idea, with many local schools hopping aboard. But with the huge and costly infrastructure in place — some $300,000 worth of equipment, according to Brown — the two began brainstorming other ways to make use of the space.

“We’re hearing that in other parts of the country, they’re resurrecting drive-ins,” Brown says. “They’re using drive-in concert venues. In Europe, I understand this has been kind of a big thing, the drive-in concerts. So that’s how it all got started.”

Naturally, there will be safety measures in place. Every car gets two parking spaces, Brown explains. Attendees will have a space on the driver’s side of their car in which they can put down lawn chairs, coolers, blankets and whatever else they brought from home — including their own food and beer. The two spaces that each car gets will be referred to as a “pod,” and guests will not be permitted to leave their pods except to go to the restrooms and port-a-potties, which will be sanitized frequently.

Brown says that they will have security guards on site, but they don’t plan to be heavy-handed or call for police to make arrests, trusting instead that those in attendance will do the smart thing and distance themselves accordingly.

“It’s just kinda common sense,” he says. “That’s one thing that I think we have been lacking in a lot of this stuff is common sense, and this is a common sense way to do something that is fun, that is engaging, that helps support local musicians and that gets people out and off the couch.”

One of the local musicians Brown hopes the concert series will help is blues artist Jeremiah Johnson, one of the sole acts on the schedule who deals in original music rather than covers. He is scheduled to perform on June 6 as part of the last concert on the schedule.

VIA THE ARTIST Jeremiah Johnson is one of the artists tapped to perform. For Johnson, the decision to be involved was a no-brainer, and one that he believes will prove historic.

“Right away I felt like it was something that I wanted to be a part of, because I think it’s a sign of the time of what’s going on — with social distancing and all the venues are forced to close down, and restaurants are closed, and you can’t have concerts,” Johnson says. “And I just felt like it was something that we needed — that if I could be a part of it, I thought it was a good idea. Because it might give some positive hope and we can show everybody that we can move forward and get past all this, you know?”

Johnson himself has seen his livelihood as an up-and-coming musician badly affected by the shutdown of the live music industry. A rising star in the blues-rock scene, Johnson’s latest album, March’s Heavens to Betsy, rose to the No. 1 spot on Billboard’s blues chart in early April — a considerable accomplishment that came right as everything in the live music industry came crashing down.

“Oh man, I lost an entire four-week European tour that was canceled,” he laments. “And every major festival is canceled. That would be national, nationwide.”

On top of that, the regular bars and small venues where a working musician might perform in St. Louis were all forced to shut their doors, too. Even as some of them reopen as St. Louis’ coronavirus restrictions are relaxed, they still are not playing host to live music.

So naturally, when Johnson was offered the opportunity to play a gig — albeit one that’s remarkably different than those he’s used to — he jumped at the chance. He plans to bring cameras and shoot a video of the experience, which he intends to one day show to his young son.

“I just wanna document this moment in history,” he says. “My son is eight months old, so all of this is happening in his first twelve months of his life. And I wanna be able show him, ‘Hey, son, when you were a little baby and you were just born, this is what was going on.’”

Asked how he thinks the drive-in concert experience will compare to attending a show in a traditional venue, Johnson immediately identifies several upsides.

“If somebody asked me if I wanted to go to a concert and I could park my own car out in front of the stage, and I could get out, bring my own cooler with my own drinks and my own snacks and food, and I’d have my own area where no one can be up on my shoulders and bothering me, I would be like, ‘That’s the coolest thing ever,’” he says. “If you would have asked me about something like that in 2019 I’d have thought, man, that’s awesome.”

Brown is hoping that showgoers agree. He says that as long as people come out and behave themselves accordingly, and as long as the shows are profitable, he and his team intend to continue throwing them beyond this initial run. If all goes well, he says, those shows could even include some big, national acts.

“We wanna see how it goes in the first week. We’ve had interest from major touring groups,” Brown says. “But at this point, before we know how this is gonna fly, we can’t make the kind of investment it’s gonna take to bring in the big acts right now. So who knows? We could be looking at a situation where we have some big players that wanna give this a try. I’m hoping that that happens.”

Regardless of whether the national acts come, Johnson is similarly optimistic.

“There’s a whole lot to be sad about,” he says of the world’s current state of affairs, “but I’m hoping this drive-in thing will get people out and remind them that hey, you know, we’re gonna get through this. If you feel uncomfortable, let’s try this first, and let’s get this rolling in the right direction.”

Drive In STL currently has shows and movies on its schedule each night from May 21 to May 30, as well as June 5. Jeremiah Johnson’s performance is slated for June 6. Passes for each car range between $40 and $70, with a six person per car limit. VIP options are also available. For the full schedule and more information, visit driveinstl.com.

Sign up for our weekly newsletters to get the latest on the news, things to do and places to eat delivered right to your inbox.