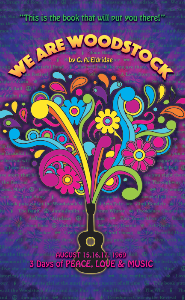 A love story that takes place at the Woodstock Festival 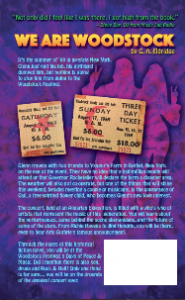 Learn of the performances, behind the scene shenanigans, and the future of the stars 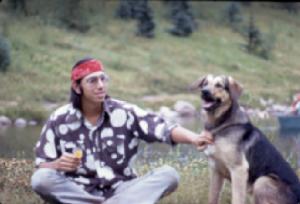 Through the pages of this historical, fictional, autobiographical novel of the Woodstock Festival, the author will send you back in time to that very weekend.

A love story that takes place at the Woodstock Festival.”

This wonderful novel puts you on Yasgur’s Farm on the weekend of August 15, 1969. You will be at the Woodstock Music & Art Fair. It’s an easy read and a fun trip as the Hippie Movement of the 1960s comes to a close. It’s a novel, not a book of facts. You will live the concert as if you were there. This concert had the who’s who of rock groups of the time, when musicians weren’t seen on TV like today. This was the place that many hippies got their first glimpse of the musical artists, who’s music shaped us all.

This festival was billed as 3 Days of Peace & Music and as Max Yasgur uttered on stage, “Nothing but peace and music.” What makes this book different is that it isn’t from one of the promoters or one of the performers point of view, this novel is by one of the spectators, a person in the audience, a person like you. As you read, he tells you of his story, which to him is one of the greatest weekend of his life. Glenn Eldridge, Author of We are Woodstock, describes the novel as, “A love story that takes place at the Woodstock Festival.” It starts with Glenn getting fired at work and getting dumped by his girlfriend and then meeting Gail the first night there.

He purchased his tickets when they first went on sale and still has them today. They can be seen on the back cover of the book. He arrives a day early with a couple of friends, so they miss the traffic jam, but you will learn all about that. How? As the reader you will learn it as the central character does, though radio reports and headlines of the news, that are sometimes read from the stage. Also you will hear all the announcements, where the infirmaries can be found and which acid to avoid.

This novel is made interesting because the words translates to your eyes as the whole festival opens up to your senses. The grounds of Yasgur’s Farm is described from the camping areas to the concert area to the Hog Farm area, where people are feed for free. You will see the crowds like ocean waves covering the landscape. The way they are dressed and the way so many came unprepared for the weekend. You’ll learn how the promoters found Max Yasgur’s Farm for this Aquarian Exposition, another name it was known by, and what a great deal Max made for himself when leasing his land, since the festival was scheduled to begin in 30 days from when they found him. There are many fun facts to learn from this book before, during and after this historic event.

You’ll learn about the performer too stoned to get on stage, others stoned that went on anyway. One group refuse to play in the rain and it did rain. One artist had to sing to prove who she was because she forgot her backstage pass. You’ll learn about the emcee who was chosen less than an hour before his first announcement and the fact that the Governor was going to end the concert by calling in the troops. There is so much to learn in this fun read.

Did I mention that between the main character going skinny dipping, dealing with dumb girls and wondering whether he should be broken hearted about his girlfriend dumbing him, that he meets a free-spirited flower child named Gail. She not only wins Glenn’s heart, but as the reader you to will fall in love with her.

Makes a great gift for the holiday, so you can relive your hippie years or let your children know what summed up the 60’s in general. It was the first really big concert that brought people from all over the country and the world to celebrate a way of life.

This is a fictional, historical autobiographical story of the greatest Rock & Roll event ever. It will never happen again. People just came to hear the music, be peaceful and see the artists that they only knew through their music. Remember back in 1969, the Mets won the World Series, Manson did his dirty deed and we landed on the moon. Woodstock was the final expression of a generation, after that we left the 60s and went on to the 70s.

If you weren’t there, this novel will put you there and if you were, let this novel take you back. By the way, Michael Lang wanted Roy Rogers to end the concert singing “Happy Trail.” Roy himself said, “If I were there with all those hippies, they would have boo’d me off the stage.” I’m not so sure they would have, but for an informative story and a delightful love story, pick up a copy and read We are Woodstock. You can also find this book on the selves at the Woodstock Museum in Upstate New York. Visit it.

An excerpt from “We are Woodstock”:

The crowd is opening up like the Red Sea as she continues yelling my name as if to be looking for me, while she holds my hand and pulls me behind her. We finally get as close to the stage as we can, which is two rows from the front. At this point she spins around and puts her arms around my neck and kisses me. Now I can see what she had seen through the binoculars. On the stage, written on the drum is “The Who.” She remembered they were the one group I really wanted to see. Then comes an announcement from the stage,

“Ladies and Gentlemen, would you please show your appreciation, they came to us especially for this show, please warmly welcome, “The Who!”